Ranking The Best TV Shows Of The Summer, So Far

It may often feel like the summer has been a TV wasteland because most of the attention has been focused on True Detective, which has been met with mixed reviews, to put it kindly. Beyond True Detective, however, there have been a number of excellent series this summer, although most of them have been flying under the radar. You might have to work a little harder to seek them out, and, in many cases, the Internet hasn’t been on top of some of these series as much as it should have been, but there are some great TV shows airing.

I’ve taken the liberty of ranking the 10 best series post-Game of Thrones, though I am mindful that HBO’s David Simon series Show Me a Hero could very top everything on this list, and Fear the Walking Dead — out later this month — still perhaps qualifies as a summer show. So, here are the 10 best summer series, so far.

I’m not going to pretend that I love the storylines on this season of Suits, because I find Harvey’s panic attacks in the wake of Donna becoming Louis’ secretary kind of silly, I don’t care about Mike’s wedding plans, and the angle on firm politics this season feels repetitive, but it’s Suits. It’s an insanely watchable series, because no matter how on the nose the dialogue is, or how easily everything is solved with a manilla folder (the ballsiest plot device in all of television), it still features one of the most likable, attractive and endearing casts on television. I’m not going to say that it’s the kind of cast that I’d watch read a phonebook, but I’d at least ask what Donna was wearing while she was reading it before I declined. 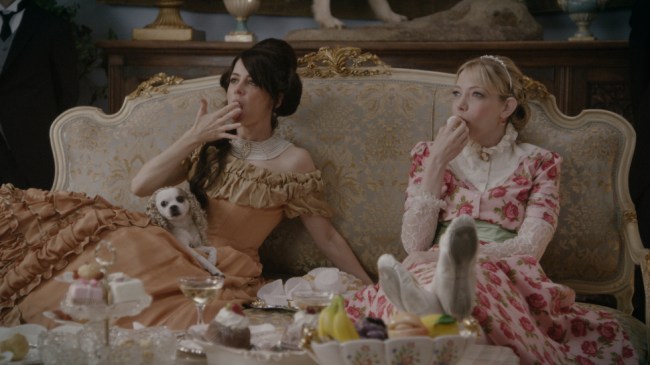 The newest Comedy Central comedy is getting next-to-no buzz so far, and that’s a damn shame, because it’s essentially the Wet Hot American Summer of period dramas. The series from Natasha Leggero and Riki Lindhome (who also star) manages to spoof everything from Downton Abbey to the Kardashians to rape culture, and features a Wet Hot American Summer kind of cast, including Michael Ian Black, David Wain, Jason Ritter, Christina Hendricks, and Paget Brewster. The idea of the series doesn’t sound that funny, but the execution of it has been stellar.

The second — and likely final — season of Halt and Catch Fire wrapped up on Sunday, and it was so much improved over the first season that — if you didn’t catch it when it aired — it’s still well worth a view on Netflix once is comes out. The series contains the same characters as the first season, but it’s practically a different show, from writing to character development to storylines. The focus shifts from Lee Pace and Scoot McNairy’s characters in the first season to the much stronger female leads, played by Kerry Bishe and Cameron Howe, while the backdrop moves from the burgeoning PC industry to the burgeoning Internet. It’s too bad the first season wasn’t as good as the second, because, if it were, it probably would’ve sailed into a third season and could’ve been one of the most talked about series of the summer.

The eight-part AMC mini-series (which was recently picked up for a second season) is almost like a television version of the recent and phenomenal film Ex Machina. It’s basically about how a select few androids (or synths) that work as nannys, gardeners, sex workers, etc. obtain a consciousness, and how the fear of that poses a danger to humans. The interesting wrinkle here, however, is that unlike how we’ve seen this trope play out hundreds of times, the machines are actually the characters with whom we feel the most empathy. We root for the androids to survive. It could use a little more levity, but it’s a very smart, often engrossing series.

I won’t lie: The often bad writing, the spotty dialogue, the uneven acting (especially with Taylor Kitsch) and the overly complicated storyline hasn’t dissuaded me from believing that True Detective is the still the most entertaining drama of the summer. It’s a pale comparison to the first season, and I can’t decide from week to week if I like Vince Vaughn in it or not, but I remain glued to the series. The complicated murder mystery is actually its biggest selling point: Trying to cut through the layers of plot and tertiary characters and figure it out has been the most fun I’ve had this summer.

I know it’s on Lifetime, it’s a behind-the-scenes shows about a The Bachelor-like show, and if you haven’t watched UnReal yet, that may sound like your worst nightmare (it sounded like mine). But incredible reviews and the notion of the first true female anti-hero pulled me in, and I don’t regret it. It’s spectacular, like The Newsroom if all the characters were horrible people and the writing was less pretentious. Shiri Appleby is the best actress of the summer, and Constance Zimmer is TV’s best hard-ass b*tch character since Glenn Close’s Patty Hewes in Damages.

It may be sacrilege to say, but Dan Harmon’s Rick & Morty may actually be better than Community, and it’s certainly more geeky. Not only is the most consistently funny show of the summer, it’s wickedly smart, like a deranged belching Emmett Brown crossed with Doctor Who crossed with the fast-paced pop-culture riffs of Community and the blunt free-style comedy of Archer. It will make you laugh, and though the science is probably all complete bullsh*t, it will almost make you feel like your learning something besides new ways to insult your friends.

Only one episode into the second season so far, Review has already reclaimed its position as the most surprisingly funny comedy around. Nobody does dry humor better than Andrew Daly, who witlessly reviews life with so much zeal and determination that he ends up wrecking his own week after week. His review of glory holes in the season premiere may have been the funniest eight minutes of TV I’ve seen in 2015.

I know how often we beat this drum, and I know that most of you still aren’t watching the perennially low-rated Sundance drama, but my God is this an amazing television series. It’s soulful and intense and heartbreaking and, every once in a while, hopeful, and it has the power to make us see the world in new ways. If there was any justice in the world, Rectify would get the same kind of press that Mad Men received, because it’s the smallest, most intimate character study on television, not just this summer, but of the last couple of years.

The USA Network show is not just the best new show of the summer, it’s the best show of the summer, and one of the most original dramas we’ve seen in years. It’s Fight Club crossed with American Psycho crossed with a great hacker movie that hasn’t been invented yet. Rami Malek will blow you away as a hacker who is basically trying to destroy American capitalism from his laptop, and it’s the kind of show that Reddit threads are made of. Ratings so far as soft, but it’s been picked up for a second season already, and it will catch on because showrunner Sam Esmail has the potential to be the next Vince Gilligan. Maybe the best part is, it’s Christian Slater’s first television role that’s not destined to disappear after a year.