Ladies and gentlemen, Triumph the Insult Comic Dog is covering the 2016 presidential primaries. Not since Hunter S. Thompson’s Fear and Loathing on the Campaign Trail ’72 has there been such a maverick of journalism on the road, trying to get the scoop. Not the poop scoop, something that Triumph is intimately familiar with, but the scoop regarding Ted Cruz’s policies and answers to Triumph’s hard-hitting questions. 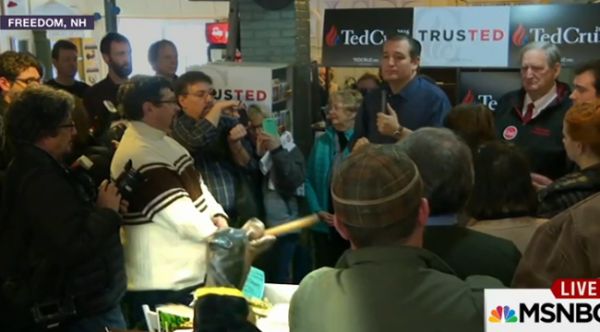 In a surprisingly progressive move for a large, corporate news outlet, MSNBC sent Triumph to New Hampshire, where Ted Cruz was addressing caucusers as the primaries heat up with the all-important vote coming on February 9. How did the notoriously unpopular Senator Cruz, handle Triumph’s questions? He rudely didn’t take them. How did he react to Triumph’s mere presence at this campaign stop? Cruz barely even acknowledged the long-time TV star that got his start on Late Night with Conan O’Brien. A glance into Triumph’s dark, doggy eyes for only a fleeting second was all the man could muster.

And so, unfortunately, we are left with little to take from this important moment in which a dog enters the tangled web of political news coverage. Triumph tried his best as a credentialed member of the press, but we the people were robbed of a Ted Cruz retort… FOR HIM TO POOP ON!

Now Watch: Presidental Ad Campaign Spending And What They Could’ve Bought Instead