This week’s episode of Modern Family — which was filmed entirely with Apple products — has been catching some flak from some for its egregious product placement. For the record, however, there was actually no product placement in the show, according to its co-creator, Steven Levitan:

For the record, there was no product placement on tonight's Modern Family. Zero. I use a Mac, so this is what I know.

But the use of a Mac did present the episode with some limitations, which in turn actually demanded that the writers shake things up from what’s become a very staid formula. Ultimately, the gambit paid off. The episode is getting some of the best reviews the show has received in years.

It was a fun episode, and while it took a few minutes to adjust to the format, I think it turned out incredibly well. The format also allowed the writers to sneak in some fun hidden jokes. Reddit had a field day.

Here’s some of the better hidden jokes from the episode:

Alex testing whether mother is actually proofreading her Yale essay (via kylethewild):

This is what you get if you email HaleyDunphy@icloud.com (via Nemaniarjun):

An ad for a very Phil-like TV Show, Kilty Pleasures (via Nemaniarjun):

It’s barely visible, but “Brody Kendall” (the fake account set up by Claire) leaves a Facebook message on Haley’s wall that says, “Just told Mom what I did when I went out last weekend. It’s really cool to share your life with your parents.” (via Nemaniarjun): 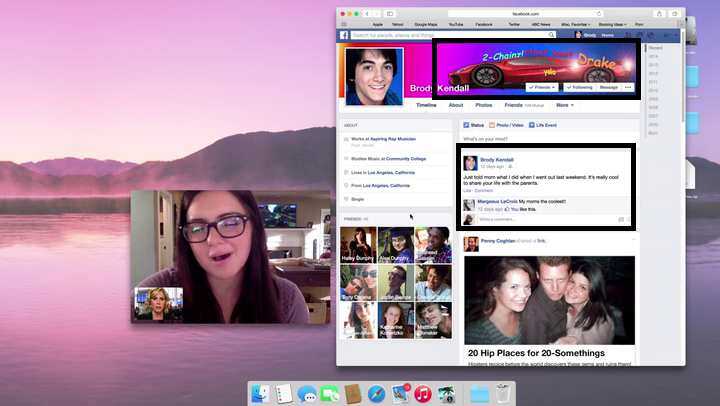 Among the songs in Claire’s top 25 playlist? “Cherry Pie,” by Warrant (via ABC):

Finally, for those of you who continue to insist that it WAS an Apple commercial, Eric Stonestreet had this to say on Twitter:

For people saying tonights Modern Family was an Apple commercial, you're wrong. It was a @GarrettPopcorn commercial. They paid $50,000,000