The Walking Dead returned last night with an episode that some are already calling the best in the series’ history. The episode, directed by Greg Nicotero and written by Seth Hoffman, finally paid off the slow-burn of the first half of the season, putting a bow on the zombie-horde storyline. It did not come without multiple casualties, however, and as the remaining members of Alexandria begin to put the pieces of their community back together again, we have these ten questions to ponder before next week’s episode.

1. How will Negan respond after his henchman, The Saviors, were blown to bits by Daryl?

Comic readers may want to pay special attention to the phrase the lead Savior used when speaking to Abraham and Sasha: “Usually, we introduce ourselves by popping one of you right off that bat.” That is the customary introduction of the Saviors, and the use of the word “bat” may suggest some sly foreshadowing. As it was Daryl who ended the lives of Negan’s henchman, that may also put a very large target on his back when Negan is introduced. It might be time to add this to the mounting evidence that Daryl Dixon’s number may be up soon.

It was, however, a brilliant, intense cold open with a spectacular payoff. “Nibble on that!” Abraham was on point all night.

2. Did The Walking Dead go too far by killing off a kid?

Knowing the Internet, the death of Sam by multiple zombies will likely stir some controversy among those who like to stir controversy over every little thing. But let us not forget that the very first zombie killed in this series was a little girl, and to be honest, even as a zombie, she was more sympathetic than Sam, who was a giant pain in the ass. Watch out, Judith, you could be next.

On the flip side, with Jessie pushing up daisies, the Richonne possibility is once again very much alive.

3. Who was ultimately the worst? Sam or Ron?

This was a question put to us at the end of last season, and I think we can now say that Ron is narrowly worse than Sam. Sure, Sam’s inability to move ultimately led to his mother and brother’s deaths, but at least he had an excuse: Carol put the fear of zombies in him last season with that speech that was echoing through his brain before the zombies devoured it. Ron, on the other hand, was just spiteful. Seeing his brother and mother die, his first instinct was to grab Carl’s gun and shoot him with it. That’s straight-up cold. The real competition for who is the worst really comes down to Ron and his dead father, Pete.

By the way, big props to Michonne, who showed zero hesitation about killing Ron. The fact that she also held Carl during surgery, that she was first to follow Rick into the zombie horde, and that she went straight to Judith after the whole mess was over suggests that she’s already an unofficial Grimes.

I thought it was interesting, when Carol told Morgan that she should’ve killed him, that Morgan replied, “You can’t.” Carol’s silence more or less confirmed that to be true. Why can’t she kill him? Is it because she sympathizes a little with his #ALLLIVESMATTER philosophy, or is it because Carol is in love with Morgan? I’m going to keep banging on that drum until it comes to fruition because those two hate each other too much not to be a little in love.

5. Did the Wolf need a doctor? Or did he actually change? 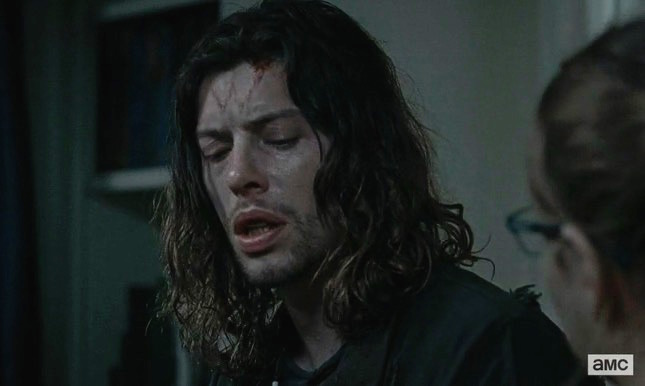 It certainly seemed that Carol was right in that Morgan should’ve killed the Wolf several episodes ago, but in this episode, there was some suggestion that Morgan was right in that even a Wolf can be redeemed. Certainly, while the Wolf remained a creepy, murderous abductor until the end, the fact that he went back for Denise — and even insisted she flee after he was shot — suggested that the Wolf may have actually changed into something approximating a compassionate human being. If he can change, then anyone can, which means that there may be something to Morgan’s philosophy, after all.

By the way, viewers who liked the work of Benedict Samuel — who played the Alpha Wolf — may want to look out for Asthma, a movie in which he stars with Krysten Ritter and Iggy Pop. He cleans up well.

6. What will become of Carl? Enid and Carl?

This better be a dream sequence or Carl better come out with The Governor's eyepatch on! #TheWalkingDead #TWD pic.twitter.com/Ku1tXRjNfr

Part one of this question is fairly easy to answer. He will almost certainly survive. What kind of person he will become with only one eye is still an open question. Will he be bitter because Ron cost him vision in one eye? Or will he be grateful that he’s still alive? With Ron out of the way, that also seems to clear the path for a romance between Carl and Enid to blossom. It won’t be too long before Carl and Enid are sitting up on roofs together enjoying gallon buckets of pudding.

7. Has Father Gabriel redeemed himself?

He certainly did, by not only carrying Judith safely to his church, but by delivering the sermon that called many of the Alexandrians to action: “We have all been praying that God will save our town. Our prayers have been answered. God will save Alexandria because God has given us the courage to save it ourselves.” That was a badass moment, and with Tyreese and Bob gone, I’m glad the series spared the other cast member from The Wire, at least until the series casts Kima (and they should cast Kima).

8. Was Abraham’s line to Glenn the most crowd-pleasing line of the season?

You’re damn right it was. When he said to Glenn, after mowing down a dozen zombies, “Can you get the gate? Appreciate it, pal,” we could hear a collective whooping, sighing, and laughing moment of relief emanate from 18 million viewers all at once. Glenn lives! Again! Then again, that entire scene felt like showrunner Scott Gimple seriously trolling us. Two near-death experiences in one season is enough.

Most of the front eight episodes of season six revolved around whether Rick would ever be able to gain the trust of Alexandria, and whether the skeptical citizens of Alexandria would ever rally behind Rick. They reluctantly did so when Rick designed the plan to lure away the zombies. However, they all had his back this time, running headlong into what initially appeared to be the zombie apocalypse version of the Alamo. The entire community came together, and with some help from the advice of Daryl’s old pal Dwight, they snuffed out hundreds of zombies together and ultimately bonded like they never had before.

How badass was that montage?

10. Will the time jump arrive next week?

Andrew Lincoln has already tipped us off to the fact that this season will contain a time jump. Between this episode and the next seems like the perfect time. A time jump will allow Carl’s eye to heal; it will allow them time to rebuild Alexandria; it will fast-forward them through the grieving process over the loss of the Anderson family; and it will allow Maggie to cut her hair. In the next episode, titled “New World,” we should see the bigger and better Alexandria that Rick, Deanna and Michonne have dreamed about. That’s just the sort of community that might draw the attention of Negan.

Now Watch: The Best Characters From ‘The Walking Dead’ That We Haven’t Seen Yet