For the first 48 minutes, last night’s episode of True Detective didn’t seem to be going anywhere but circles. It dragged, as Nic Pizzolatto glacially moved along a few plot points, namely:

1) In case you didn’t catch it, Paul Woodrugh is gay. NO, REALLY. He sleeps with men and everything! And he’s really, really tortured about it, in case that’s not COMPLETELY OBVIOUS. As always, however, the best cure for the gay is proposing to the pregnant girlfriend with whom you had to take boner pills to have sex.

This would’ve been a compelling plotline… in 1994.

2) Ray is super bummed about losing custody of the ginger son who is most certainly not his. However, he seems to have thrown in the towel. Instead of fighting for custody and the right to be a presence in his son’s life, Ray just decided to give him his dad’s old badge to remember him by. Please don’t tell me that’s the only bullet in the chamber of Chekhov’s badge.

Does anyone else get a real Angus vibe from this kid? 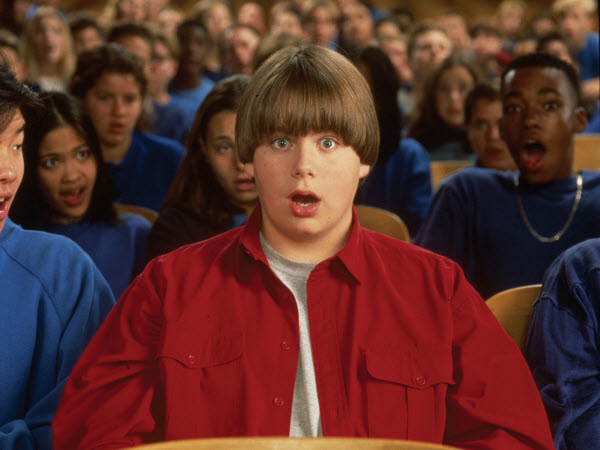 Oh sure, he’s a “fat pussy” right now, but he’s going to grow up and kick James Van Der Beek’s ass at prom one day, hopefully while wearing his grandpa’s badge.

3) Frank is jumping headfirst back into the criminal business, taking back the poker room and shaking down old partners as he endeavors to get back into the drug-trade. A man’s gotta earn a living. He also tried to get Roy from The Office to partner up with him on the land deal. Not only was Roy from The Office not intimidated by Frank, he continued to make eyes at Frank’s wife, who’s his ex-girlfriend.

Vaughn is coming out of his shell, though, and whatever else you want to say about this season of True Detective, he’s turning it on. This line was vintage Swingers:

“Things move fast now, babe. Someone hit the f*cking warp drive and I’m trying to navigate through the blur.”

What’s not as interesting is the pure soap opera that is his attempt to conceive with his wife, and his refusal to adopt an heir. However, again, I loved this line in response to his wife’s suggestion that they adopt:

We also learned that Lady Semyon had an “operation” that might be preventing her from having a baby.

Most importantly, however, Frank taught us all the word “louche,” which was not a term of endearment he used for his lieutenant, with whom both Frank and Lady Semyon are growing increasingly suspicious due to his ties to Osip and his potential involvement in the murder of Caspere.

Louche, by the way, means “disreputable or sordid in a rakish or appealing way.”

4) Meanwhile, Ani’s chickens have finally come home to roost, and by “chickens,” I mean ex-boyfriends who she’s screwed over, and by “roost,” I mean, sexual harassment allegations, which got her suspended from her job. That suspension, however, does not extend to her state detail on the Caspere investigation, which seems to be the only job she’s working on right now. So, no harm, no foul? Everyone is fairly certain that Mayor McCheese is behind Ani’s suspension. Ray even warned her that it was coming.

What we do know is that her partner, that dude from The Unit, is a total dick for selling out his own partner because he couldn’t handle being banged and dismissed by Ani.

5) There’s a whole huge mess to unravel now between Ani’s new age father, the shrink played by Rick Springfield, and their associations with the young Mayor McCheese. This reads like the conspiracy behind the Lawnmower Man in season one of True Detective involving the church, the school, the rapes, the Five Horseman, and Billy Lee Tuttle that ultimately fizzled out once the manhunt for the Lawnmower Man/Spaghetti Monster unspooled. Hopefully there will be more to this conspiracy than window dressing.

6) There was a huge, 10-minute shootout. It was a fairly impressive shootout, although that explosion looked like the Breaking Bad building explosion made with the budget of Sharknado because, apparently, HBO spent all of its FX budget on “Hardhome.” 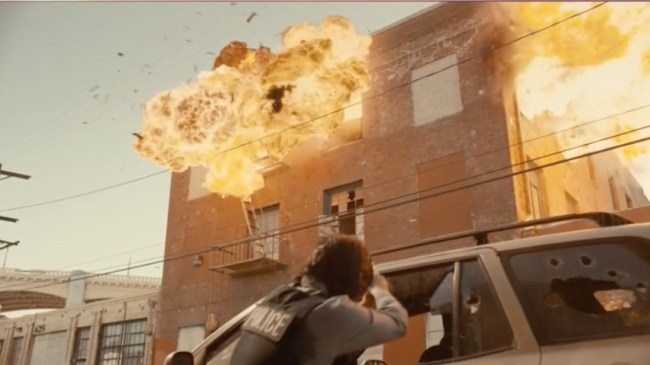 After 2,000 bullets were sprayed all over Vinci, basically everyone involved was dead except for Ray, Ani, and Paul, which is interesting because the town it’s based upon is Vernon, Calif., population 114. In other words, that shootout basically halved the population of Vinci.

The only significant death here is Ray’s skeevy partner, who was snapping photos of Woodrugh in the last episode. He was clearly involved as a Vinci lackey, keeping an eye on the investigation and Ray in the interests of the mayor. Now, he’s dead.

But Here’s Where It Gets Super Interesting

It’s my guess that Ray’s now dead skeevy partner helped Mayor McCheese and the others lead Ray and Ani to Ledo Amarilla and the Mexicans, all who ended up dying in the shootout.

Here’s the fascinating wrinkle about Amarilla: He was involved with a Santa Muerte cult. If you’re unfamiliar, Santa Muerte is a deity often associated with violence, criminality, and the illegal drug trade in Mexico (and Mexican gangs in Los Angeles). It’s kind of an unofficial spin-off of the Catholic church, and the worship of Santa Muerte is linked to prostitution, drug trafficking, kidnapping, smuggling, and homicide. Basically, criminals pray to Santa Meurte for good deaths. You may recognize the saint, the Lady of Death, from Ben Caspere’s house.

Yes, that’s where that skeleton finally ties into the story. You may also recognize the Lady of Death from another show, Breaking Bad.

That officially connects Caspere to Ledo Amarilla. Moreover, those in the Santa Meurte cult also worship the Eagle Owl, who’s considered the messenger of death. Could this be an Eagle Owl?

But don’t think for a second that Ledo Amarilla is solely responsible for the death of Caspere. If you watched scenes from next week (vague spoilers), you’ll notice that there’s a time jump (Ray no longer has his mustache). It appears that the gang will be back together — similar to the way Rust and Marty did in later episodes of season one — to figure out who really killed Caspere, which means that basically Ledo Amarilla is season two’s Reggie Ledoux, also known as the Yellow King.

What we’re likely to find in the next episode is that the authorities cleared the Caspere case and pinned it on Ledo Amarilla, but Ani — a beat cop now — will regroup with Ray (now fighting custody) and Paul (now making a family), and will go rogue. They’ll start investigating Mayor McCheese, as well as his connections to Ani’s father and the Rick Springfield shrink, until they drill down into the conspiracy behind the death of Caspere and its possible connections to Santa Meurte. It’s fairly obvious that Mayor McCheese is behind the shootout because of the ominous “Let’s be careful out there” warning, but he only really wanted to get Ani and maybe Ray killed (which is why his henchman wondered if Ani “needed all this manpower.”) I’m fairly certain that Ray’s partner also knew what was coming, too, which is why he’d hoped that they’d wait for Ledo Amarilla to come out instead of going in after him (a decision that cost him his life).

The show may be moving slowly, and some of the character developments may be on the lame side, but the murder mystery is growing increasingly interesting.