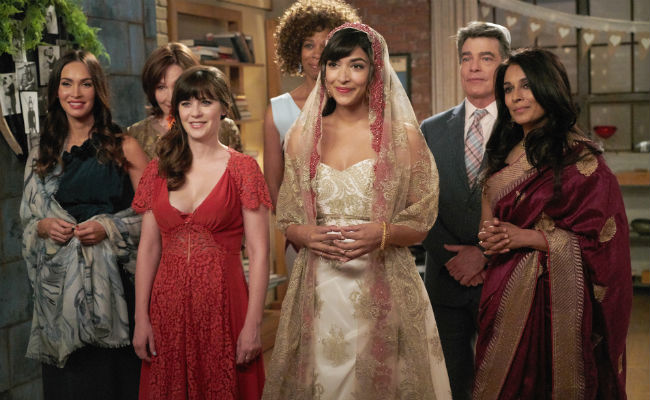 New Girl (Fox, 8:00/9:00 p.m.) — The night before Cece and Schmidt’s wedding sees Nick and Winston helping the groom to rewrite his vows. Meanwhile, Jess believes Sam is getting ready to propose to her, so she must stop him the only way she knows how. That’s right. Another round of True American is in order. Later, in the season five finale, Schmidt tries one last time to convince Cece’s mother to attend their wedding which might end with him missing the big day.

Chelsea (Netflix) — A long time ago, Chelsea Handler was on a list of names to replace David Letterman. But the comedian said f*ck that and, instead of throwing in her lot with all of the boring white guys doing late night TV, decided she’d be the first person to have a talk show streaming to 190 countries around the world. What exactly we’ll be treated to when her series premieres at midnight tonight is still a bit unclear, but it’s host is funny and fearless so assume nothing will be off limits.

Woman (Viceland, 10:00 p.m.) — This new series from feminist badass Gloria Steinem is aimed at shedding light on the harsh circumstances women around the world are forced to endure. Rape, prostitution, civil war — we’re not saying this show will be easy to watch, but it’s definitely worth it.

NCIS (CBS, 8:00 p.m.) — One team member fights for their life while the rest of NCIS partners with the FBI and MI6 to hunt a British spy gone rogue.

The Flash (CW, 8:00 p.m.) — Barry fights to return to his old life leaving the team to handle a familiar enemy on their own.

Grandfathered (Fox, 8:30 p.m.) — Season one ends with Jimmy and Sara possibly giving their relationship another go and Gerald planning an elaborate proposal to Vanessa.

The Real O’Neals (ABC, 8:30 p.m.) — Pat tries to figure out how to bond with his kids while Kenny’s new tutoring job brings him closer to a student’s mother.

Chicago Med (NBC, 9:00 p.m.) — April and Halstead clash over how to treat a homeless man as he ponders taking a job offer in California and Dr. Manning continues to mourn her husband’s death.

Containment (CW, 9:00 p.m.) — A supply run goes bad for Theresa and Lex battles with having to lie to the public about the severity of the outbreak.

The Grinder (Fox, 9:30 p.m.) — The season one finale sees Stewart sidelined during his father’s trial, leaving the rest of the firm responsible for clearing his name.

Chicago Fire (NBC, 10:00 p.m.) — The team responds to a building collapse that’s trapped more than a dozen people; Severide and Kidd continue to see each other; Dawson still wants to foster Louie; and Casey is at odds with Antonio.

Ink Master (SPIKE, 10:00 p.m.) — The artists are tasked with inking “in-your-face” tattoos, whatever that means.

Person of Interest (CBS, 10:00 p.m.) — Reese’s cover may be blown after the latest POI is revealed to have ties to his former CIA colleagues.

The Night Manager (AMC, 10:00 p.m.) — Pine finally makes it into Roper’s inner circle and Burr worries about the safety of her source.

First Impressions with Dana Carvey (USA, 10:30 p.m.) — Steve Carell guest stars in the premiere of this series which pits amateur celebrity impressionists against each other.