UPROXX 20: Joey Pollari Has Had Enough Of All You Negative Nancies 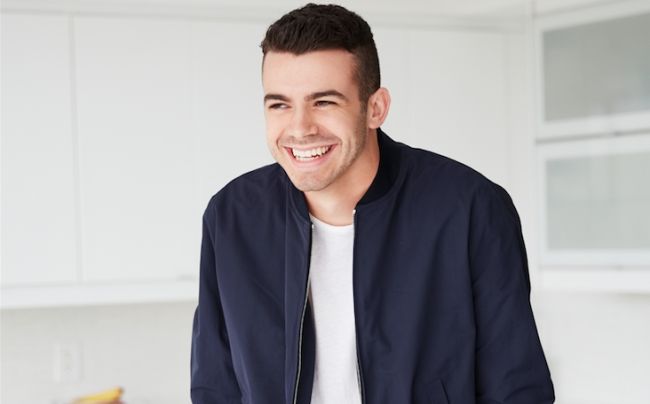 Joey Pollari is an actor perhaps best known for portraying Eric Tanner on ABC’s American Crime. You may have also seen him on the Disney Channel original films, Avalon High and Skyrunners. American Crime airs on Wednesday nights at 10 p.m. EST on ABC.

Joey was nice enough to take a few minutes out of his busy schedule recently to answer a few questions from us.

Gin and tonic, because something about pine needles just says “great times.”

I’m a devotee of @perfumegenius on both platforms, but I’m a freak for a few artists on Instagram and I’m always checking to see if they’ve posted: @john_michael_metelerkamp, @zachhobbs, and @taytaypjay. But I also love high-intensity belly laughter, so @yourmomsatonmyface.tv is my old reliable.

I don’t have a DVR (or live TV), but I’m anxiously awaiting the time when I get to turn into a couch and watch Mr. Robot and Making a Murderer. When is RuPaul’s Drag Race back on?

Giphy, Any Decent Music, and Brain Pickings for giggles, jams, and inspiration, respectively.

Most days, you can find me screaming the lyrics to “Fade Away” by Susanne Sundfør, “Crosswords” by Panda Bear, and “Peach, Plum, Pear” by Joanna Newsom.

7. The first face that comes to mind when you think “punchable?”

8. What’s the last thing you googled?

How to spell Negative Nancies.

I’m realizing I’m a man of three-way ties (Who knew? I’m learning a lot about myself here. Thanks, Uproxx!), so here’s another to continue patterns. I saw The Knife at Coachella two years ago and they had me doing tribal dance moves I didn’t even know I knew. I’m forever grateful for that experience of spell-casting/summoning weather patterns. Next would have to be Future Islands, who I’ve seen a few times now, and every time, Sam Herring is a transcendent performer who is unafraid to mean every word. Also, he does very admirable high-kicks. By the end of their shows, I’ve usually danced and cried in equal measure. And just this last December, I saw one of my all-time artistic heroes, Joanna Newsom at the Fitzgerald Theater in my home state of Minnesota. I was a ghost afterwards.

More pattern! Either The War of Art by Steven Pressfield for artistic direction, Tiny Beautiful Things by Cheryl Strayed for heart remedies, or Inherent Vice by Thomas Pynchon for paranoiac funnies.

My family has supported me ever since I was three years old and doing spontaneous performances as the Wicked Witch of the West inside of grocery stores. They’re like Rock’em Sock’em Robots of loving tolerance.

A day with great friends, good eats, bumpin’ tunes, and a beautiful locale is every piece of the pumpkin pie.

I think I went into a catatonic state after eating at Lee, in Toronto, Canada, but my mama takes the cake for making three-course extravaganzas that get to the heart of every matter. Love you, Mama.

Anomalisa. It crushed me in the loveliest way a movie can crush you. Which I guess means slowly and sweetly? That actually sounds really painful. I’m losing myself here. Anyways, Anomalisa is fantastic.

This is a strange question to answer (and ask?) as my first crush had to be pretty early on. Maybe three or four? I’m going with Barney or Judy Garland. Answering this question with grace seems difficult.

I cook a mean quinoa, sweet potato, black bean, and sautéed kale bowl with home-made horseradish. But I’m imagining Nic Cage would smash his plate against the wall and start telling me of a secret prophecy that only he’s privy to, which part of me believes because Nic Cage is engaging and his emotions are palpable, but then I’m thinking, “I’ve seen so many Nic Cage movies, this could turn sour,” until my judgement gets the better of me and I’m swayed by his acting powers (see: Adaptation, Raising Arizona, Moonstruck) and Nic Cage and I are both painting the walls with horseradish. It happens fast.