Smoking Will Kill You: 11 Open Questions We Have After This Week’s Heart-Stopping ‘The Walking Dead’

Until the first commercial break, this week’s The Walking Dead episode, “JSS,” felt like it might be a breather from last week’s premiere, providing us with a glimpse of Alexandria while Rick and his crew were diverting zombies. That proved not to be the case. The action and intensity kicked in immediately after the first break and didn’t let up until the final seconds. Written by The Walking Dead regular Seth Hoffman and directed by Jennifer Lynch (daughter of David), “JSS” was anxiety-inducing, terrifying, and bloody, as a new threat — a crew of murdering thugs with no apparent motive beyond the desire to kill — broke through Alexandria’s walls and raised hell.

By the end of the episode, Alexandria had lost several more citizens, the community was left in shambles, and a new conflict had emerged. Here are the questions we have left open as we head into next week’s episode.

We finally got a glimpse of Enid’s backstory in The Walking Dead cold open this week. We learned that her parents — who apparently had no fight-or-flight instincts, or any ability to panic — calmly attempted to repair their car as zombies shambled toward them, right up until the point that the zombies feasted on them, orphaning Enid. Enid walked around aimlessly, slept in cars, and ate raw turtles until she finally found her way to Alexandria. Along the way, she drew JSS onto various things, as a kind of mantra to herself: “Just Survive Somehow.”

I don’t think so. Before running into Carl during the chaos with the wolves, Enid confessed that she was going to leave Alexandria, fearing that the walls couldn’t protect her. She felt like she was better off alone. Carl told her that she was not allowed to say “goodbye.” She agreed. At the end of the episode, she left behind a note to Carl with the above mantra: “Just Survive Somehow.” Did she leave Alexandria without saying goodbye? (Because Carl wouldn’t let her?) Or did she go back to her house? I suspect, given her relationship with Carl now, that she plans to stick around (also spoilers: IMDb has her listed in episodes for the rest of the season, although IMDb is notoriously unreliable in this regard).

Fun aside: The actress who plays Enid, Katelyn Nacon, was also in that short, Too Many Cooks, that made the rounds last year.

3. Where did the horde of zombies from last week’s episode go?

The focus of this week’s episode was entirely on Alexandria. Morgan was the only person to travel from the other party to Alexandria, where he discovered that the Wolves were responsible for the horn, however, accidentally. They crashed an 18-wheeler into the Alexandria fence. We were not privy to the action going on elsewhere with the horde of zombies. However, because they never arrived in Alexandria, it’s safe to assume that Rick somehow managed to redirect the zombies back on track once the horn stopped blowing. We’ll find out more on that next week. In this sneak peek, we see that whatever is happening, Rick is very angry.

4. Is Morgan still a little messed up in the head?

Morgan prevented two of the Wolves from killing him last season. He saved Daryl and Aaron from a zombie trap laid by the Wolves. He also, in this episode, witnessed several members of the Wolves brutally murder residents of Alexandria. Yet, he is still reluctant to kill any of them. I appreciate Morgan’s respect for life to a point, and that point is when his respect for the lives of murderers endangers the lives of those who are his friends and allies. Morgan’s refusal to kill cost him some respect from the audience at home and Carol. It goes beyond respect for life and into recklessness and negligence. #TeamCarol

Incidentally, did Morgan tell Father Gabriel he learned his fighting skills from a cheesemaker? I look forward to seeing that backstory.

5. What’s the deal between Morgan and Carol? 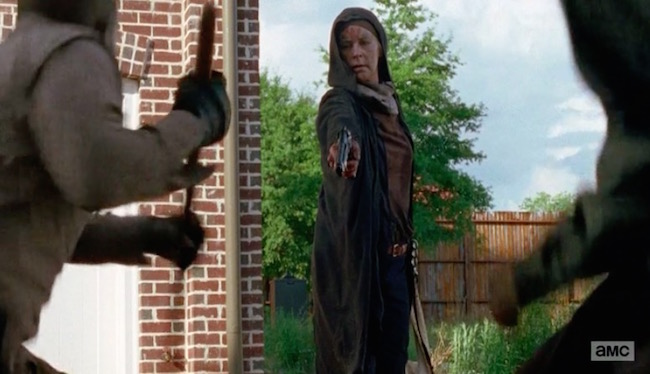 When Carol shot the man who Morgan was tying up, she was delivering a huge f*ck you to Morgan and his beliefs. Carol has always been about the greater good, even more so than Rick. Recall that Carol burned Tyreese’s girlfriend because she was sick and her illness threatened the prison. Carol also put down Lizzie because Lizzie had become a danger to others. She’s not going to hesitate to kill any of the Wolves, even if it means stepping on Morgan’s #ALLLIVESMATTER philosophy. The philosophical conflict this season may not come down to choosing between Rick and Morgan; it may come down to choosing between Carol and Morgan. As much as I like Morgan, I choose Carol every single time. At least, Morgan eventually got angry enough put down the one Wolf who nearly killed him, although, as we saw in the last scene, the relationship between Carol and Morgan remains chilly.

6. Is that the last we will see of the Wolves?

Morgan idiotically let five of the Wolves escape, telling them, “You keep choosing this life, you will die.” One would think that Morgan would have learned his lesson about letting those guys live the first time they came back and tried to kill him. Apparently not. The fact that one of the Wolves picked up what may as well have been labeled as a Chekhov’s gun on his way out suggests that it’s not that last we’ve seen of them. In The Walking Dead, everyone either dies or eventually comes back.

7. What was up with those photos in the backpack Aaron found on one of the dead Wolves?

In case you have forgotten, that was Aaron’s backpack with photographs of Alexandria inside. He left it behind in last year’s season finale when he and Daryl were nearly killed by the zombie trap the Wolves left. During a fracas with a group of zombies, he lost it. The Wolves clearly picked it up. Basically, Aaron led the Wolves to Alexandria. That’s going to weigh heavily on him for a few episodes, what with him indirectly being responsible for the deaths of several Alexandrians.

8. Where was Aaron’s boyfriend, by the way?

Aaron’s boyfriend, Eric, was actually around this episode. He’s basically been relegated to a background player for the moment. He was one of the guys helping out the new doctor Denise (Merritt Wever), who should be a nice addition to the cast. You might recognize her as Schmidt’s ex-girlfriend on New Girl. (She was also on Nurse Jackie.) Given the size of the cast now (more than 25 named cast members), I hope Denise is bad at her job, because the series can’t afford for her to save too many lives.

9. What was the significance of the “A” on the banister that Carol saw?

The simple explanation is that it was just one of Sam’s letter “A” stamps, which everyone gets when they enter Alexandria.

However, there is a more interesting, though less likely explanation. Explained in full here, it’s possible the “A” is also a callback to the train car that Gareth and the other members of Terminus put Rick and the crew in back in season four.

Recall that, in a flashback in the season five premiere, we found out that Gareth and his brother had also been trapped in that train car. Previous to that, they were not cannibals. They were leading people to Terminus to help them.

After being trapped in the train car, however, they came out cannibals. It’s possible that the Wolves also spent some time in that train car and went mad. Recall what the Wolves said to Morgan when he said, “You keep choosing this life, you will die.”

“We didn’t choose,” the leader of the Wolves said. By that, he might have meant that they, too, became who they are because they were also trapped in the train car at Terminus. It’s an interesting, if unlikely, theory. “A” is certainly an important symbol in the series.

10. What’s going on with Jessie and her sons?

Nothing good, clearly. Sam is terrified, and Ron is resentful of Rick for killing his father, so much so that he refused safety provided by Carl even after Carl saved his life. There were two key moments from the scenes involving the Anderson family, however. First off, Jessie admitted to her son that she is friends with Rick, even after he killed her husband. (Ha! She likes Rick!). Second, Jessie has never been more awesome than when she was stabbing that woman with a pair of scissors. If we were ranking the best characters on The Walking Dead, that scene helped her jump at least three spaces.

11. Will anyone ever respect Father Gabriel again?