We’re The Ones Who Live: 6 Burning Questions We Have After Last Night’s Deranged ‘The Walking Dead’

Sunday night’s penultimate episode of The Walking Dead ended with the best deranged-person speech since Shane threw open the barn doors in Season 2, impressing upon Hershel that the walkers weren’t “sick.” They were undead. The thing about both Shane’s speech then and Rick’s monologue last night is that they were both right, but their presentation was all wrong. That same speech delivered in an even-tempered way by someone who looked more wise, authoritative, and calm would’ve been perfect.

You still don’t get it. None of you do. We know what needs to be done and we do it. We’re the ones who live. You just sit and plan and hesitate. You pretend like you know when you don’t. You wish things weren’t what they are. You want to live? You want this place to stay standing? Your way of doing things are done. Things don’t get better because you want them to. Starting right now, we have to live in the real world. We have to control who lives here. Your way is going to destroy this place. It’s going to get people killed. If you don’t fight, you die.

But when a guy has his face covered in blood, is mad as hell, and is holding a gun on everyone, that same speech looks like this:

Which is why this was necessary:

Most of last night’s episode was working toward the showdown between Rick and Pete, as well as that speech, which perfectly sets up next week’s season finale. Based on all the moving parts from last night’s episode, here are the questions we have going into the finale:

1. Will Sasha survive the finale? Like the rest of Rick’s group, Sasha is suffering from PTSD, but she’s also clearly dealing with a bad case of survivor’s guilt, as well as a need to prove that she’s not weak like her brother, Tyreese. I thought the survivor’s guilt was initially leading her down a very dark path toward self harm, but I now feel that it’s leading her toward redemption. In the season finale, I think she’s going to use those sharpshooting skills to prove to everyone else — but most importantly to herself — that she is not her brother. That she is strong. That she is useful. That she is a survivor. She couldn’t keep her promise to Noah that he would survive, but she can save Alexandria for Noah.

2. What’s going on with Carol and Sam? Did you notice who Sam ran to when Rick was beating the hell out of Pete? Was it his own mother? Nope.

Carol just can’t help herself, can she? She’s cunning, and resourceful, and brilliant, but at heart, she’s still a mother, and — as much as she tried to guard herself against it — she’s still hoping to fill that Sophia-sized hole in her heart. It didn’t work out so well with Lizzie (LOOK AT THE FLOWERS), which is why she tried to push Sam away. But a kid from a home with an abusive father? That’s Carol’s kryptonite. For her sake, I hope Sam is killed off soon. The show can’t really carry another kid for very long, so he will invariably be killed off. Let’s just hope that Carol doesn’t get incredibly attached again. If she has to go through another Sophia or Lizzie, Carol may not survive it. Or worse, she’ll turn into Rick.

3. Will Rick kill Pete? And just as importantly, should he? That’s the central theme of this episode: Is Alexandria civilized in the way that the world was before the zombie outbreak, or are there a different set of rules? Should a man be executed for beating his wife? Rick clearly thinks so. Deanna does not. One of them is delusional. Despite the bloody-faced, gun-waving monologuing, Rick is right. Weak, destructive links don’t belong. A community cannot survive if someone is tearing it down from the inside, and that is exactly what Pete is doing. The fight with Rick and Pete’s public outing as a wife-beater is not going to change him. He’s not going to be shamed into the right path. In fact, if Deanna spares him, it will probably embolden him because he will think that his usefulness as a surgeon outweighs his detriment as a wife-beating scumbag. Pete’s gotta go. Pete’s gonna go. 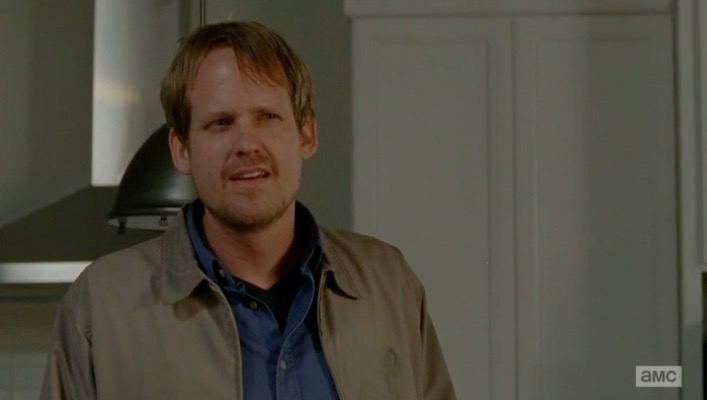 The good news for Richonne fans is that Rick probably ruined his chances with Jessie, too. She’s not about to leave one relationship with an unstable dude and jump into another. Jessie needs someone more laid back, who doesn’t feel the need to prove his manhood. Someone who is half party, half business. You know who I’m talking about:

4. What is up with the W’s, Take VI?: Okay, fine. The “wolves” aren’t an internal force, as I had theorized before. I was wrong. They’re a definitely external one, and Daryl and Aaron will probably end up leading them right toward Alexandria in the season finale. By this point, comic readers will likely recognize exactly who the wolves are. Expect to see them arrive in the season finale for a confrontation that will probably allow Rick to redeem himself and avoid exile by proving what he said in his deranged speech: They have to control who lives in Alexandria. They have to fight. They have to live in the real world where the threats outside of that wall are terrible. You think Nicholas is going to save them from this?

5. What will Nicholas do with that gun? Speaking of Nicholas, if the Alexandrians are ultimately confronted by the Wolves in the season finale, those with guns will likely prove to be most useful. That includes the guns that Carol stole, as well as the one that Nicholas holds. I don’t think he’s going to use it to kill Glenn. I think he’ll end up using it to help save Alexandria from the Wolves, and he may very well die a martyr trying to redeem himself.

6. What’s the deal with Enid? I’d like to think that Enid is not holding on to a dark secret, and she is not connected to a past force that will come back to haunt Carl. I hope she’s just a nice girl who will finally give Carl something to do in the series, someone to care for, and someone to grieve over when she is killed. These two kids are going to make it, at least until next season’s midseason finale, when she will probably die a horrific, gruesome death that will send Carl into a dark downward spiral that will consume his soul. CAN’T WAIT!