The 1970s are known for two things, primarily:

With that in mind, the fact that I didn’t see the facial hair situation coming in this final half-season of Mad Men is upsetting in ways I can’t describe. Like, of course there would be a facial hair situation. The last episode of the first half ended the day after the moon landing, putting us smack in the middle of 1969. Even a conservative timetable meant we would get to the 1970s at some point, and getting to the 1970s means weird stuff happening on people’s faces. Pete’s late-1960s sideburns were a clue. The hair is migrating from the tops of people’s heads. This is happening. Nay, this happened. Look at Roger Sterling’s new mustache.

It’s glorious. White and thick like a vanilla milkshake, traversing the entire upper lip and stretching a few of its most daring whiskers onto the relatively uncharted frontier of the cheeks, close enough to the sideburns that it can exchange pleasant hellos but not so close that either of them are able to meddle in each other’s affairs. Yes, this is a very good mustache.

It wasn’t the only surprise mustache on the show, either. Ted also grew one since we last saw him. Gun to my head I’m going with Sterling and his platinum caterpillar, but it’s a closer call than I would have thought if you accosted me on the street this weekend and shouted, “SCENARIO: ROGER STERLING AND TED CHAOUGH GROW MUSTACHES. WHO YA GOT?” straight into my face. (Note: Please feel free to engage me in conversations about the hypothetical facial hair of television characters. I will make time.) I think maybe the fact that Ted seemed so happy had something to do with it. My working theory is that it’s some sort of Samson situation, where the sprouting strands are actually the source of his mental health. Maybe he’ll grow a beard and end up becoming a perfectly zen self-help guru. Maybe he’ll start videotaping motivational speeches and distributing them throughout Manhattan. Ted Talks. Get it? Like those things. But different and old.

I don’t feel great about that joke. My point is that he looked good. Kinda like a sandy-haired Brian Fantana. But he’s riding a second place horse in this race.

Now, I know what you’re thinking. You’re saying, “Wait, if Ted’s mustache is in second place then does that mean you have BOTH him and Roger in front of Stan?” Don’t be insane. Stan’s is part of a full beard and shaggy mane ensemble that can’t be quantified by the same type of guidelines one would use to judge a simple mustache. To put it in terms of the horse racing metaphor I introduced last paragraph: Roger and Ted’s mustaches are thoroughbreds; Stan’s look is a spaceship. 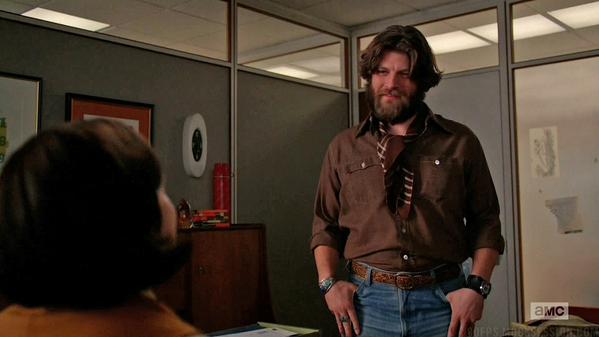 But that’s the “what” regarding Roger’s mustache. The more interesting question here is the WHY. Why did Roger grow out a luxurious mustache? This is a man who kept a tight shave throughout all of the 1960s, even while cavorting with half-naked enthusiasts of psychedelic drugs and free love. If you’re gonna let it all hang out, that seems like the time. Does it have something to do with Cooper’s death? If so, it must be related to his own hang ups about it. I can’t believe Cooper would have prevented him from growing one. The man had a large painting depicting tentacle rape in his office. He was in no place to judge anyone in the arenas of personal style and professional decorum.

Or was it the windfall from the McCann sale that led him to grow it out, like an “Eh, screw it. I’m rich and I’m growing a mustache” move? Did he even do it consciously? Was the money and new status so cosmically freeing that he just woke up with it fully-formed one day, the way one might wake up with an unexplained crick in the neck? The Nixon speech Don watched from bed pins the events of this episode in the ballpark of April 30, 1970, about nine months after we left off last time. What happened in that period that made Roger Sterling decide to grow this particular mustache? This is infinitely more fascinating to me than anything that has ever happened to or even in the vicinity of Bobby Draper.

And another thing. Beyond leaving open the question of why Roger grew the mustache, the show also deprived us of weeks — and possibly months — of the mustache in its various stages of construction. Roger Sterling must have showed up at the office for every day — okay, most days —  with it slowly coming in, meaning he got the full inter-office mustache small talk treatment, from “You forget to shave today?” to “Hey, you growing that out?” to “Oo, coming in nice.” Who knows, he MIGHT NOT EVEN BE DONE GROWING IT. Maybe he’s gonna full-on handlebar that sucker out like Rollie Fingers. I mean, he probably won’t. But he might. You don’t know. You didn’t even see THIS mustache coming. Don’t start acting like some sort of expert now.

(Hey, wait. Here’s a thought. Do… do you think maybe Roger Sterling gliding into a diner booth with a magnificent silver mustache is actually an attempt to re-balance the universe after Sam Elliott showed up clean-shaven on Justified this season? Because that would explain a lot. Clean-shaven Sam Elliott was jarring enough to loosen Earth from its orbit and send us hurtling rudderless through space. Maybe Roger Sterling had to grow one to save us all. He’s basically Bruce Willis in Armageddon in this scenario, but instead of vaporizing himself into the cosmos with a nuclear bomb, he grew a mustache and drank top-shelf liquor with a parade of socialites. Point, Sterling.)

Let’s close on this, and it’s something I want you to think long and hard about. Roger and Ted growing mustaches was a lot of fun, and I’ve already had probably a little too much fun with it. (1,000 words and counting.) But they’re secondary characters on the show, popping in here and there to say something witty or fire someone or advance the plot in some other way. But they don’t drive the action. They’re not the main focus of the show. This brings me to my question: What if Don Draper had grown a mustache, too? Like, imagine if this had been the first thing we saw last night…

There would have been chaos in the streets.