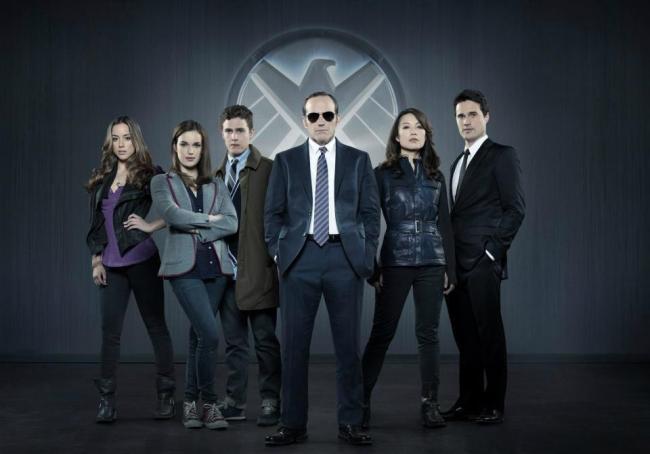 Marvel’s Agents of S.H.I.E.L.D. (ABC, 9:00 p.m.) – S.H.I.E.L.D. returns after a two-month hiatus, and things are as batsh*t crazy as ever. Here’s a quick recap of what’s gone down so far: Skye met her father (spoiler alert, he’s a real jerkwad); Coulson killed Whitehall… or did he? Bobbi and Mac have turned into a couple of sketchballs who may or may not be working on some hidden plan that could compromise the entire team. Trip saved the world. Skye has some freaky new powers she can’t control. Tonight, some “astonishing changes” are supposed to throw the team into all new jeopardy. Whatever the hell that means.

Justified (FX, 10:00 p.m.) – Maybe it’s because we’re living in a post-Parks and Rec world, but every time a Tuesday rolls around, I feel the real need to self medicate. The end is near, but it’s not here yet, and while Raylan makes goo-goo eyes at his kid, Boyd goes hunting for Ava. I mean, with Ava. I mean, Ava’s in deep sh*t.

Fresh Off the Boat (ABC, 8:00 p.m.) – Eddie tries to put the moves on his new babysitter, and a group of vandals cause problems for the Huang family.

Hell’s Kitchen (Fox, 8:00 p.m.) – Now that he’s had his fill of yelling at children, Gordon Ramsay is ready to make grown men (and women) cry again in the show’s Season 14 premiere. For his first trick, Ramsay will have the 18 contestants jump off a roof in order to more accurately judge their commitment to becoming top chefs (because having them actually cook a meal just doesn’t make sense). Also, Captain Kirk makes a cameo.

The Voice (NBC, 8:00 p.m.) – “The blind auditions continue.” Seriously? How many more episodes of blind auditions are left? I only ask because I get the distinct feeling that Christina Aguilera is about one chair spin away from barfing her guts into Pharrell Williams’ 10 gallon hat.

Repeat After Me (ABC, 8:30 p.m.) – Maybe it’s because Wendi McLendon-Covey was able to make my dreams of seeing Michael Bolton talk on a banana phone finally become a reality, but this show is starting to grow on me.

New Girl (Fox, 9:00 p.m.) – Jess and Cece complete that age-old rite of passage that involves stumbling about early in the morning, hung-over, half-naked, lost in Brooklyn and harboring an intense craving for cheese puffs. Nope. Sorry, that was just my Saturday morning. Their walk of shame is probably much classier because it’s Zooey Deschanel and her quirky bangs can do no wrong.

Chicago Fire (NBC, 10:00 p.m.) – Dawson goes out on a double date, Mouch discovers his fertility clinic donation has resulted in a mini-Mouch, and the station isn’t warming up to the temp boss. Get it? Warming up. Because, you know, it’s a show about firefighters. No? Fair enough.