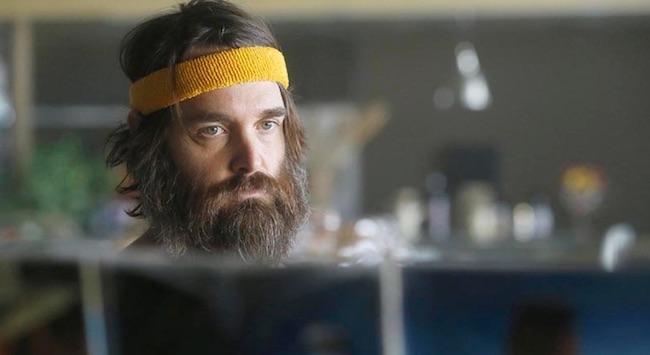 On Thursday night, I attended the New York City premiere screening of Last Man on Earth, the Phil Lord/Chris Miller-produced television series for Fox starring Will Forte as Phil Miller (get it?), the aforementioned Last Man on Earth. I’ve had the pleasure of covering Forte’s career over the last few years (this 2013 profile of Forte when he was co-starring in Nebraska is one of my favorite things I’ve ever gotten to write) and, at the after party, Forte gave some answers to some hard hitting questions.

It’s actually pretty painful wearing a suit of armor. I can’t believe people ever used to go into battle in those things because you’re very immobile. There are a couple different spots that aren’t completely covered, one of them being your testicles and one of them being the lower neck area.

You’d think the testicles would be the most protected area.

You would think! It’s not. No, not at all. Or, maybe I have sensitive testicles. But the first several shots where the tennis balls are coming out, somehow are aimed right at my balls. And then they would change the trajectory and somehow it would still be aimed at my balls.

How long does it take to get into that suit?

Well, there were like four people helping me to do it. So, it took about five minutes.

That’s not long at all.

We were in Chatsworth, California and it was very, very, very hot. And we’re in the valley, so I was pouring sweat under there. But it was a delight because those little elements are the fun thing about this show to me. I love all the story happening and being peppered with all of these unique things. The guy is just sitting there, trying to figure out ways to pass the time. So it’s just a weird thing where he’s being pelted by tennis balls wearing a suit of armor. That, to me, is one of my favorite things in the show – and you blink and you could miss it.

Colin Jost was sitting right behind you during the screening. I asked Colin about this too, if he felt pressure to react, but how much are you listening to his reactions? He was your closest barometer.

That is a great question because I certainly would register when he was laughing. And there was even a part of me that, in my head, I was saying, What a tough position for Colin to be in.

So, you’re aware he’s behind you.

I knew he was behind me. And he knows that I know he’s behind me and I hope he’s not trying to laugh hard just because. But, at the same time, I’ve known Colin a long time. We know each other’s sense of humor. I’ve seen this enough with an audience that I’m immune to audience reaction – some audiences are laughing more than others. And I’m proud of the product and I believe in the product, so, if nobody laughs during a single frame of this, I would still feel great affection for this and feel like it was exactly what we wanted to do. And some people laugh, but then ultimately love stuff.

I was sitting behind Colin Jost and I kept thinking, If this show were bad, what’s he supposed to do? But that’s certainly not the case.

By the way, if I thought this show was bad, I wouldn’t have invited people. And probably Fox wouldn’t have had a screening like this. And I’m not trying to brag or anything, but we worked really hard on this and it just so happened to turn out just how we wanted it. So, that’s the thing, we’re trying to get it out there because it’s such a different thing we’re trying to do. You just have no idea how people are going to react. The only thing you can control is your own level of pride in something and we worked on it – Chris and Phil and I ; and, obviously, a million other people were beyond instrumental – but, ultimately, the three of us were the main people getting this initial one together. And we got it right to the point that the three of us loved it and, after that, it’s like, “I hope people like it, but this is what it is.” And there were a couple of screenings where we had tried out some things that we were on the fence about…

With Colin Jost still sitting behind you.

Colin, every step of the way, was sitting behind us. But, I’ve done enough things that people have not gone to see. That’s pretty much my trademark, is doing things that people don’t go and see. So, I can handle it when I’m very proud of something and people don’t go and see it. When there are things I’m trying to do to try and pander to try and guess what an audience is going to like, when I feel like I’ve compromised things…

I cannot think of an instance where you’ve done that.

Not when I have a say so. I can handle it when people don’t go and see something. Like MacGruber, I could not be more proud of that. And Chris and Phil have this magical quality that’s tough to come by, which is a way to make things accessible to audiences without compromising any artistic integrity. They can still do these delightful, weird, different things, but somehow in a way that is accessible to mainstream audiences. And I’m hoping that rubbed off on me, because it would be really nice to finally do something I’m proud of that people actually go and see. But, at the end of the day, all I can ask for is that I’m proud of it and whatever happens happens and that I can live with myself. It’s when you make decisions that you don’t agree with and people don’t go see it, then it’s a bummer.