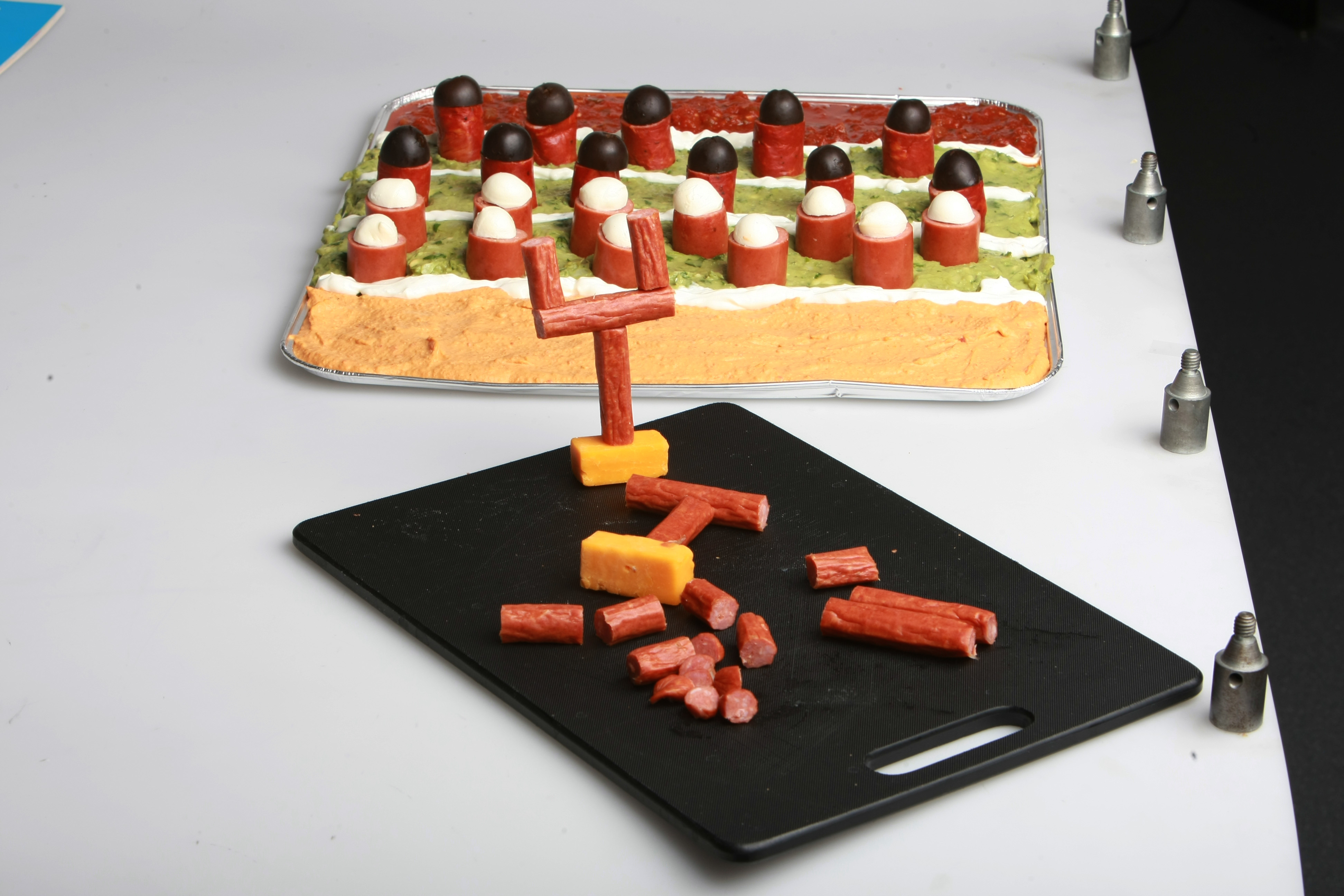 You told yourself you’d be good this year. You weren’t gonna eat that much over Christmas, and you’d keep the late-night pizza runs to a minimum. And hey, you have! Good job! Too bad you fucked it up by agreeing to host a Super Bowl party this year.

Thanksgiving and Christmas get a lot of flak for throwing people off of their normal diet, and for good reason. But at least traditional holiday foods like turkey and sweet potatoes, though rich in fat most of the time, contain proteins and other nutrients. By contrast, traditional Super Bowl food consists exclusively of things that will leave assorted residues on your fingers, and in your stomach lining. Most people leave Super Bowl parties with fingers caked in one layer of Cheeto dust, a layer of oil from the buffalo wings covering that, a healthy coating of Doritos JACKED ™ crumbs, and a final brushing of pizza grease. Then they don’t poop for 2 weeks.

Don’t be that guy. It’s super easy to host a pretty great Super Bowl party and not need to have an emergency defibrillator on hand. Read on.

Chips and dip. Obviously. Now, guacamole is traditionally the go-to here, and for good reason. It’s delicious, and pretty good for you. The issue is that if you get guacamole, you also inevitably end up buying Tostitos! Scoops tortilla chips and eating 3.5 full bags of them, which kind of defeats the whole purpose of, y’know, putting the bare minimum into eating healthy. So we’re going to go in a slightly different direction here.

Go to the store and buy a whole bunch of pitas. Cut them in half along the crease, and cut them into 8 wedges. But don’t do that in the store. Do that at home. I would have thought that goes without saying, but there you go. Preheat your oven to 375 degrees, and while it’s heating up, stir together some olive oil and spices. You can use whatever you like here, but I usually use a crushed clove of garlic and some adobo. If you’re one of those people who lives in a “real house” with “real kitchen implements” and “real plumbing”, get off of your high horse long enough to take your fancy Williams-Sonoma Cooking Brush ($499.50) and lightly (LIGHTLY!) brush the pita wedges with the oil mixture. If, on the other hand, you live in an abandoned washing machine at the edge of town and do not own a cooking brush, you can dip a paper towel in the oil mixture and press it against the pita wedges. It’ll work just as well.

Pop the wedges in the oven for around 12 minutes, but check on them often. Pita chips are easy to burn.

While they’re cooking, in honor of The New Official Dip Of The NFL, let’s make some hummus.

STUFF YOU NEED:
-2 cans garbanzo beans/chickpeas/THEY’RE THE SAME YOU DINGUS
-Olive oil
-Tahini
-Paprika/Cumin
-Sriracha, because of course
-Garlic
-some pine nuts or maybe not, it’s whatever
-like a lemon or something

Drain one of the cans of chickpeas. Throw that shit into a blender or food processor. Throw the other can of chickpeas in there too, but leave a healthy amount of water in there. This will allow you to use less oil later on. If you’re gonna be fancy, you can toast your pine nuts in a pan now to get them nice and golden brown.

Pulse a few times to loosen everything up, then add one or three glugs of olive oil, along with a clove of garlic and a squirt or two of sriracha and hey maybe cut that lemon in half and squeeze some juice in there, oh shit a seed got in the blender. Fuck it, lemon seeds are good for you probably.

Blend it till it looks hummus-y. Open up the top and pour some tahini in there. Maybe like 2 big ol’ drippy spoonfuls. Yeah, that looks right. Maybe a bit more. Put your finger in there. Nobody’s watching. We’re alone here. You’re in a safe place.

Sprinkle in a healthy amount of cumin and paprika, and add more sriracha. Blend it and taste it, then add more of whatever you fucking think it needs more of and blend it again. Repeat this process until you get the flavoring just right. The cool thing about hummus is that it’s really easy to flavor it however you want. This is the part where you can add, I don’t know, habaneros, cinnamon, cloves, bacon bits, deer antler spray, or whatever the hell else your little heart desires until it tastes right. If it’s not silky enough, add more olive oil, or more chickpea water. You’ll know you’re done when you start moaning and rubbing the hummus all over your face.

Oh wait, shit, you forgot about the toasted pine nuts, you idiot. Take your face out of the hummus and throw that shit on top like you’re some bougie asshole.

Hummus is full of protein and healthy fats, so it’s generally a nice thing to snack on. When you’re done, put a big bowl of the hummus out with some chopped carrots, celery, and the pita chips. This should be enough to get you through the pregame show and prevent your asshole saboteur friends from ordering a pizza.

You guys do realize that you can get crispy, wonderful, spicy chicken wings without dumping them in oil, right? It’s actually pretty easy.

First, get your prep work done. Get your chicken wings, pat them COMPLETELY dry, prep a baking tray with some foil, and spray some Pam on it. Preheat your oven to 400 degrees. You’re doing great!

Next, make yourself a flour mixture. You’re gonna want to have about 1/4 of a cup of flour there for every 7 wings, just so that you have enough to coat them. In a heavy duty ziploc bag, add a healthy scoop of cayenne, a few twists of ground pepper, and some salt. Add the flour, and shake it up. Add the chicken wings to the bag, and shake until they’re all well-coated.

Take the wings out of the bag, and pop them on the baking sheet, then sock that in the fridge.

Check on your wings– by now, the flour mixture should have adhered to the meat, and you can move on to the next step.

Here’s where you can get a bit creative. You can use whichever hot sauce you like here, but I recommend mixing soy sauce with wasabi. Add enough soy sauce so that the wasabi dissolves and turns into a thin sauce. Taste to make sure it’s nice and spicy (and not overly salty), then reduce it in a pan to create a glaze. Dredge your wings through it, and roll them in the breadcrumbs.

Alternatively, if you’re boring and lame and don’t want to listen to my opinions you jerk, you can just pour out a bunch of hot sauce and use that, then roll the wings in the breadcrumbs at that point.

Pop the wings back on the sheet and bake them for 45 minutes, turning them over halfway so that they crisp up right. Resist the urge to crawl into the oven to be closer to the chicken wings. Fail, and then realize it’s really hot in the oven and it’s more comfortable inside your apartment. Get treated for third degree burns. Enjoy your wings.

FUN COOKING FACT: If you serve these with store-bought ranch or blue-cheese dressing, I will find you and burn your house down. Do this instead. It takes like 5 minutes.

Okay, so this is usually where you serve your chili. I see no reason to deviate from tradition here, especially because the magic of chili is you can make it however the hell you want. If you have a go-to chili recipe already, a great way to make it healthier is to reduce the red meat content (or replace it with chicken altogether), and increase the amount of beans/tomatoes/crushed up Flintstones vitamins you put in there instead. There are tons of recipes out there for healthy(ish) chili, but I personally recommend the recipes penned by our very own KSK family (or at least hosted on this site). Here are a few of the healthier ones.

Now, if you don’t want to do any of that, keep in mind that generally, chicken is less caloric than pork, which is in turn less caloric than beef. You really can’t go wrong just dumping a can of tomato paste, a can of crushed tomatoes, a few pounds of chicken breasts, a can of kidney beans, hot peppers, and some spices into a pot on low heat for hours upon hours until you can shred the chicken with a fork. Chicken chili, in general, isn’t all that unhealthy until you pile 4 cubic meters of shredded cheese and sour cream on top of it. So maybe don’t do that this time.

As a sidenote, if you haven’t already, pick up some disposable bowls and plates. In addition to making cleanup incredibly easy, these will also help with your portion control, seeing as they’re generally smaller than their washable counterparts.

It was difficult, but you got through the game and you still feel okay about what you ate. Maybe you ended up ladling the chili directly into your mouth. Maybe you surreptitiously snuck a slice of pizza from your neighbor’s Super Bowl party in a temporary lapse of judgment. But hey, in general you did pretty okay! Definitely better than last year, when you pretended that the pizza guy messed up the order and only delivered two pizzas, secretly taking the other four to your room, blending them into a large smoothie, and chugging it before the game.

So good job! And hey, since you’re eating less caloric foods, now it’ll take you fewer drinks to get wasted, which is pretty much the only way to experience a Super Bowl that will either end in a Patriots win or a Seahawks repeat.