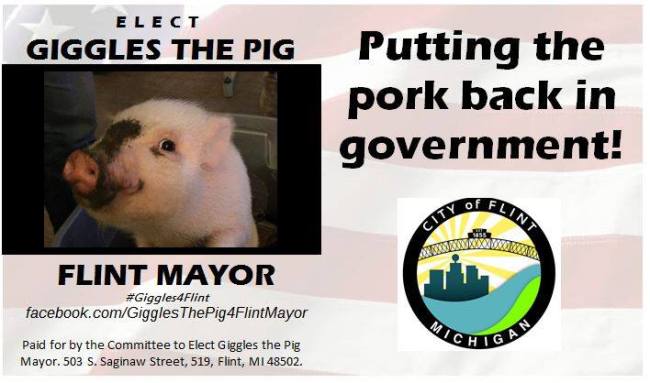 According to Detroit’s CBS affiliate, the man behind Giggles’ write-in candidacy is an area defense attorney named Michael Ewing, who explained his decision to run the pig thusly on the official GigglesThePig4Mayor Facebook page.

It started because one of the city council members, who was convicted of murder, announced he was running for mayor. I am pretty forgiving, but it I am really strongly opposed to murder—and think electing a mayor who was convicted of murder sends a bad message about our city. Not to mention the embarrassing letters he has written about Flint. We also have a mayoral candidate who was recently convicted for driving his car while drunk on the highway with three flat tires—while driving the wrong direction on the highway. This same mayoral candidate has been thrown out of council meeting because he cannot behave himself. Flint deserves better candidates than this. While reading about these people it occurred to me that Giggles would be a more dignified candidate—and I’m right. […]

So, yes, I am running Giggles the Pig for Mayor of Flint. I hope that you will vote for her as a mayoral candidate who has never murdered a human. She has never placed citizens in harm by driving drunk on the highway, and has never interrupted public business and public meetings. She is a sweet and intelligent animal—which is more than can be said for some candidates.

Now, I know what you’re thinking. You’re thinking, “Sure, a pig is running for mayor. That’s great. But can this story get even better?”

Glad you asked. It can. In the wee hours of the morning earlier today, a Facebook account that appears to belong to one of Giggles’ opponents, Wantwaz Davis (the aforementioned city councilman who was once convicted of murder), posted a lengthy rant on Giggles’ Facebook page chastising Ewing for the stunt. Here is the most notable excerpt (emphasis mine):

Hypocrisy has no place nor boundaries and surly does not discriminate, in which you have confirmed. In saying, you can defend men and women in the court of law who have been charged with murder, or any improprieties, take thousands of dollars from their families, in their weakest moments, while considering them to be of no significance or ability to redeem themselves. In conclusion, I honestly laughed at your remarks, however, I will be the next mayor of Flint, Michigan and will feast off of your pig at my victory party, you can get in for free, VIP on me.

To recap: A candidate is running for mayor and one of the other candidates is so mad about it that he — instead of, say, creating a scary attack ad or demanding a debate — THREATENED TO EAT HIS OPPONENT AT HIS VICTORY PARTY.

Has to be a first.