Having originally made his debut in 1940, The Black Hood is currently experiencing a renaissance thanks to a bold new reinvention of the character from Archie Comics’ gritty Dark Circle imprint. Written by Duane Swierczynski (Birds of Prey, the crime novel Canary) and illustrated by Michael Gaydos (Alias), the comic chronicles the exploits of Greg Hettinger, a Philadelphia cop who takes a bullet to the face while pursuing a vigilante known as The Black Hood. Killing the Hood during their confrontation, the now-disfigured Hettinger begins a long road to recovery that’s complicated when he becomes addicted to painkillers and other drugs. When he decides to don the hood for himself, he starts to clean up the mean streets of Philadelphia and bring down the drug kingpin who tries to have him framed.

Despite sharing the same parent company as Archie, Jughead, et al, The Black Hood is an unrelentingly dark story that’s nearly as disturbing as it is compelling. At its center is a good man who has been dealt some bad blows. Realizing that the law sometimes gets in the way of justice, he takes matters into his own hands to help bring a little light into the City of Brotherly Love.

Released this week, the sixth issue of the comic features Hettinger recovering from the events of the first story arc at a California rehab clinic. Handling art duties for the standalone issue is comics vet Howard Chaykin, whose imagery shows that although California may be bright and sunny, Hettinger will never truly be able to keep out the dark. In advance of the book’s release, I chatted with Duane Swierczynski about his work on The Black Hood so far, as well as his various other creative endeavors. Here’s what he had to say.

How did you get brought on board this project and how familiar were you with The Black Hood before you worked on the comic?

Though we’d never worked together before, I was friendly with editor/writer Alex Segura. We’re both crime novelists, so we’d say hi at various cons and such. A couple of years ago, Alex approached me with the idea of doing a Black Hood comic. Not only had I never heard of the Black Hood, but I was also dubious about the idea of an Archie superhero. I have no qualms with the Riverdale gang, mind you — it just didn’t seem like something that would be in my wheelhouse, you know?

But after Alex assured me that I could pitch this as dark as I’d liked, I did some research and was amazed at the Hood’s deep pulp roots. (Legit, too — he had his own pulp mag in the 1940s!) So the idea of bringing him screaming into the present appealed to me. I pitched my take, figuring it would be way too dark, but what the hell, right? Well, Alex surprised me by asking for a revise… and encouraging me to make it even darker. That’s when I knew we were going to have a lot of fun working together.

Reading the comics from the perspective of a lifelong Philadelphian, one of the most appealing aspects of the book is how little Easter Egg touches like the inclusion of Ray’s Happy Birthday Bar, the Action News van, and referencing Harrison Graham root the story in realism. I was wondering if you could share some thoughts on your collaboration with Michael Gaydos, and how much you chatted with him about the mood of Philly.

Gaydos and I have never spoken! Weird isn’t it? We’re both private guys, I guess. A lot of those Easter Eggs are scripted, but Gaydos will also come up with really amazing details on his own (pretty sure the Action News van was all him) that feel so damn Philly, you would have sworn he lives here, too. A lot of readers, I’m sure, won’t notice those details, but it’s nice to have some little things in there for the home crowd.

Recently on the Electric Lit website, Philly writer Michael Deagler shared his thoughts on its literature scene, both past and present, stating that the city “have a writer or a book that people immediately associate with the city.” Is that a statement that you would agree with?

You mean, should we have a knife fight to determine who gets to be the conscience of Philadelphia? I don’t know, man. I don’t see it as a competition; this town’s plenty big (and weird) enough for us all. I think the bigger problem is that Philly is so often overlooked in novels and comics and such. The real Philadelphia, that is. Just because you show us a glimpse of City Hall and the Liberty Bell doesn’t mean you’ve actually set your story here.

How do you feel about the current thriving literary scene there, and, much more broadly, could you attempt to articulate what it is about the strange at times shadowy atmosphere of the City of Brotherly Love that has influenced works from artists as diverse as David Goodis and David Lynch?

I’m not especially tuned into the literary scene here. I am pals with a number of local excellent novelists, including Bill Lashner, Dennis Tafoya, Jon McGoran and Robb Cadigan (though he’s more a Phoenixville guy), but I think that’s because we’re the crime fiction bums on a street corner, warming our hands over the same barrel fire.

I do love that it’s still possible to catch glimpses of the same Philly that Goodis did back in the 1950s (especially the Tenderloin, our forgotten skid row) and Lynch did in the 1970s. And it’s great fun to contrast those times with the present. My next novel, in fact, is all about this — it’s set in three different time periods in Philly history, cycling from the ’60s to the ’90s to the present and back again. Part of the thrill was seeing characters change, to be sure, but the city as well.

In regards to The Black Hood, Having already put Hettinger through the ringer in the first arc, what can you tell us about his next storyline? How will the events of the sixth issue, “Flor de Muerto,” impact what happens from here?

Oh man, the wringer of that first arc is nothing compared to what comes next. If we consider Hettinger a sort of half-assed superhero, then he’s going to meet his first supervillain team. And they’re serious jerks, roving the Badlands in white vans, plucking “undesireables” off the streets for nefarious purposes. (Imagine a team of George Zimmerman types, armed with body armor and tasers, let loose in the neighborhood. Yeah. Scary, right?) But the biggest battle Greg faces is the one with himself, in an effort to stay clean. That’s why the events of “Flor de Muerto” are so important. It lays the groundwork for the struggle to come.

Why do you think that audiences respond so favorably to antiheroes or characters who are defined by shades of grey as opposed to right or wrong?

Well, I think we all live in that grey area, don’t we? Sure, maybe we’re mostly good… but we have plenty of dark thoughts and urges, too. And it’s so easy for life to nudge you out of the light and into the shadows. Think about Greg Hettinger’s story. He goes from handsome cop to drug-addled freak because of one split-second decision on a warm spring afternoon.

Would you be interested in writing any other Dark Circle titles? If so, which ones and why?

Alex and I have talked about some possibilities, but right now my focus is on the Hood.

What other current projects are you working on?

Well, there’s Revolver, my next novel for Mulholland Books, which I believe is due out next summer. And next month will see the e-release of a Heroes Reborn tie-in novella I wrote called “Catch and Kill.” (It features that fun-loving couple Luke and Joanne from the series.) And out this month is a short horror comic story I wrote for John Carpenter’s Tales for a Halloween Night, which was a huge thrill. (My ridiculous name? Sharing back cover space with John Freakin’ Carpenter? For real?) But beyond that, there’s a lot of stuff I can’t talk about quite yet, including a movie (codename: Project Beehive) and a TV pilot (codename: Project Roller) that I’ve been working on for a while. Yes, I give these things code names, which granted, is goofy. But what the hell, right?

Issue 6 of The Black Hood hits stores Wednesday. Here’s an exclusive look at the first six pages of the issue, courtesy of Dark Circle Comics. 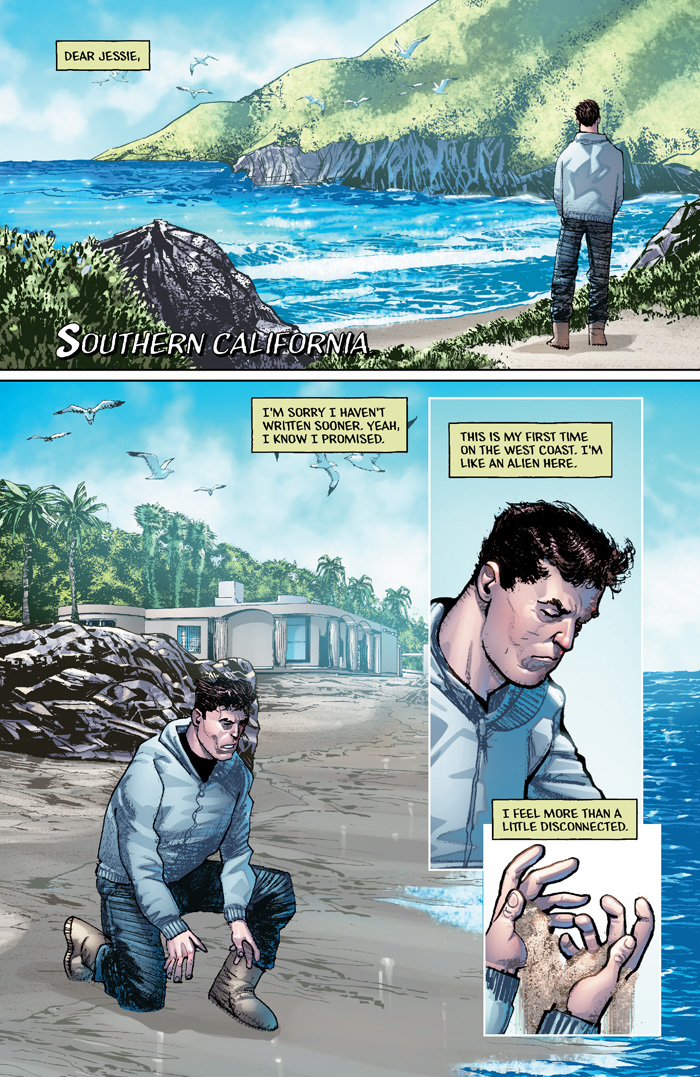 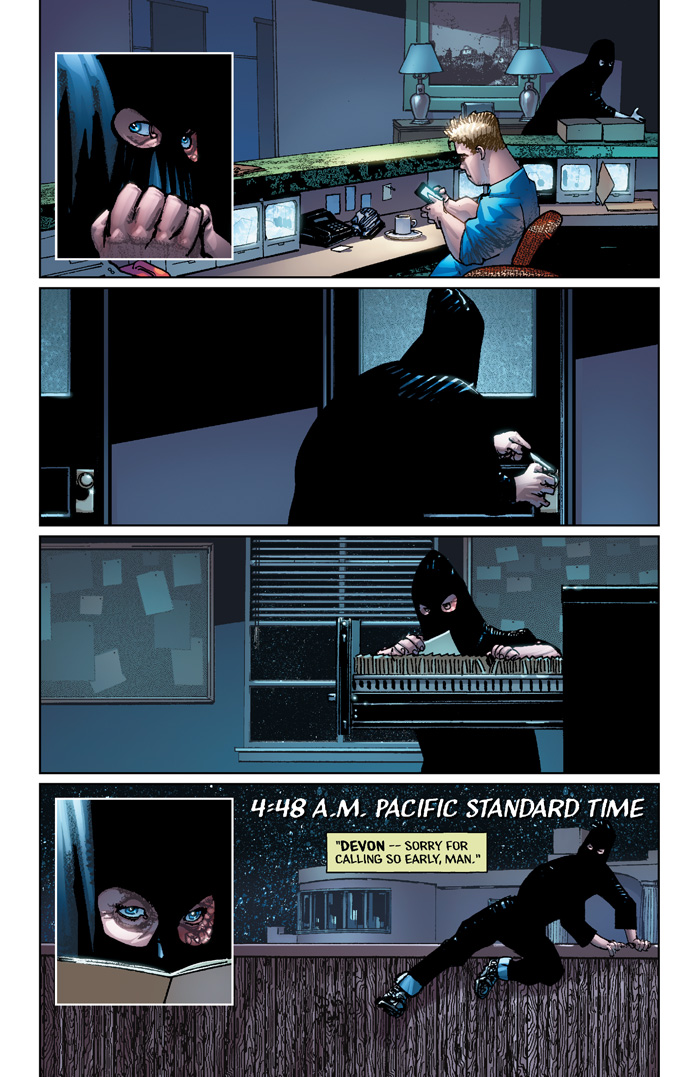