This Man’s Tweetstorm Skewers The Hypocrisy Of Bible-Thumping Homophobes 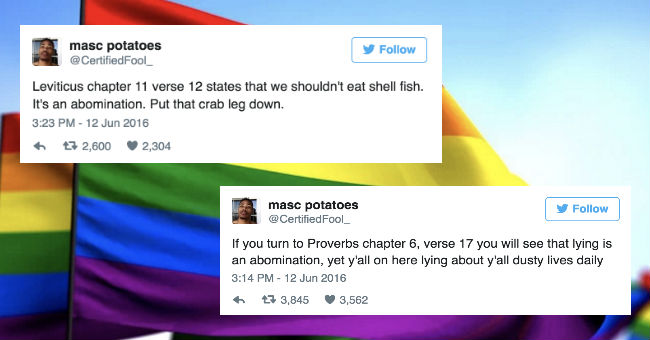 If you’ve been on the internet at all since the horrific shooting at a gay nightclub in Orlando, you’ve likely seen the tremendous outpouring of support for the city and its LGBT community. But there’s also the chance that you’ve stumbled across some Bible-thumping homophobes attempting to justify an attack that left 49 people dead via the word of their god.

Darrius Anderson saw that argument one too many times and took to Twitter to school anyone who would dare quote Leviticus while a city is still reeling. He kicked his 140-character Sunday School lesson off with the most effective means of interrupting a person…

"According to the bible…" pic.twitter.com/b3EeNmQyBA

…and immediately switched into scholar mode:

If you really want to talk about what the Bible considers an abomination we can. I'm well versed in this word.

If you turn to Proverbs chapter 6, verse 17 you will see that lying is an abomination, yet y'all on here lying about y'all dusty lives daily

Anderson was waiting for you bigots at the door, and hoping they brought bread and water. Just about anything else might land them in trouble.

Turn to Isaiah chapter 66. Here we learn that eating unclean things is an abomination aka pork & I'm sure one of you sucking a rib bone now.

Leviticus chapter 11 verse 12 states that we shouldn't eat shell fish. It's an abomination. Put that crab leg down.

For all you wine and liquor drinkers, you should probably check out Proverbs chapter 20. You might just be an abomination.

Leviticus is a pretty interesting book. Chapter 3 says you shouldn't eat things like steaks or burgers, but here y'all are.

But his lessons didn’t just cover food. Anderson knows that a constantly shifting relationship status might end in some heavenly side-eye.

And ladies. If you happen to divorce your husband, get with another man and then decide to get back with your husband. Think again.

How can you, a defiled divorced woman judge someone for being gay when your Lord considers you unclean? pic.twitter.com/CroABw4UbQ

And don't get me started on all you dusty cheaters out here because y'all are abominations in several different ways pic.twitter.com/J3yyCdWeGo

Again for my ladies. You have the nerve to say homosexuality is against the bible and that same book says you shouldn't speak in church.

95% of you niggas have beat your meat enough times to send your whole family to hell. First Corinthians chapter 6 will explain.

I know you love your rolexes and your pearls and your chains etc, but unfortunately you may just go to hell. Go read Timothy chapter 2.

You got tattoos on your body coming for the gay community when your God said you shall "not print any marks upon you: I am the LORD."

And if that wasn’t enough, fashion choices could land you in the celestial doghouse:

Look at the tag on your clothes? Is it a polyester or fabric blend? Because according to Leviticus chapter 19 y'all going to hell too.

Leviticus chapter 19 also states that y'all shouldn't get round haircuts or trim ya beards so… pic.twitter.com/5WsUZF4HtL

After laying it all out, Anderson asked who among his cyber-congregation was without sin (in the most re-tweetable way):

So now that you've actually seen what the bible says about abominations, who's going to heaven? I'll wait. pic.twitter.com/MuXAJJgPwP

It’s safe to say his rant got noticed, with many users interjecting with the virtual equivalent of “Preach!”

And far from dropping his opinion and ignoring any haters, Anderson individually responded to anyone who tried to poke holes in his argument. For example, this lesson in hypocrisy:

Because the verse used to condemn homosexuality is also Old Testament. I also referenced New Testament tho so… https://t.co/sZV4UXezHL

Feel free to bookmark this and direct your more hateful acquaintances to it. Unfortunately, this conversation isn’t going to go away anytime soon.