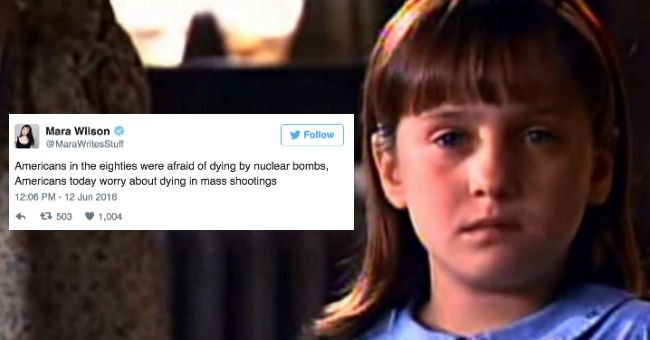 Mara Wilson, we love you. We loved you as the bookworm with the terrible parents in Matilda and Mrs. Doubtfire back in the day (and on Broad City), and we love you for your tweets that put trolls in their place now. We especially love you for your recent string of tweets in paying tribute to the victims of the Orlando nightclub shooting.

Wilson, now 28 and definitely not the little telekinetic girl you remember her as, started tweeting following the news of the tragedy on Sunday morning. And she didn’t hold anything back:

Americans in the eighties were afraid of dying by nuclear bombs, Americans today worry about dying in mass shootings

Taking solace in the Tonys being tonight. Crying to In the Heights, glad there is one community where LGBT people have been safe, welcome

Then, she shared a photo of herself at a gay club ten years ago, and wrote about her experience:

Me at a gay club when I was eighteen. I feel embarrassed looking at it now… pic.twitter.com/qMZec3WBvu

Being a "straight girl" where I clearly didn't belong, but I will say, I felt so welcomed there.

I have never had a better experience at a club than I did then. Great music and people. And one of my friends met his partner that night!

I haven't been to one since college, except once when a friend brought me along. I didn't feel like I belonged there.

Finally, she dropped a trivial tweet in regard to her sexuality:

But the LGBTQ community has always felt like home, especially a few years later when I, uh, learned something about myself.

And by “2,” she means a 2 on the Kinsey Scale, which is classified as “predominantly heterosexual, but more than incidentally homosexual.”

I know a lot of people don't like the Kinsey scale, and that is fine by me. But I'm pragmatic at heart and find comfort in numbers.

She also gave herself the label of Bi/Queer, something she didn’t used to identify as:

.@__SonjaLouise__ I said I *used* to identify as mostly straight. I've embraced the Bi/Queer label lately

In the end, Wilson just wants privacy in her relationships:

Your support is much appreciated. I will say, though, I'm still gonna be pretty private about my relationships, as I always have been.

But her desire for privacy didn’t keep her from opening up about a very personal issue. Wilson’s Twitter followers flooded her tweets with overwhelmingly positive messages in support of her revelation. “Your fans will support you in just the same way that you have supported us through your work in our darkest moments,” one wrote, while another added, “As the kids say these days, #LoveIsLove.”

When she’s not writing fabulous tweets, Wilson works on her own novels. Her first book, Where Am I Now? is currently available for pre-order, and will be hitting shelves later this year.