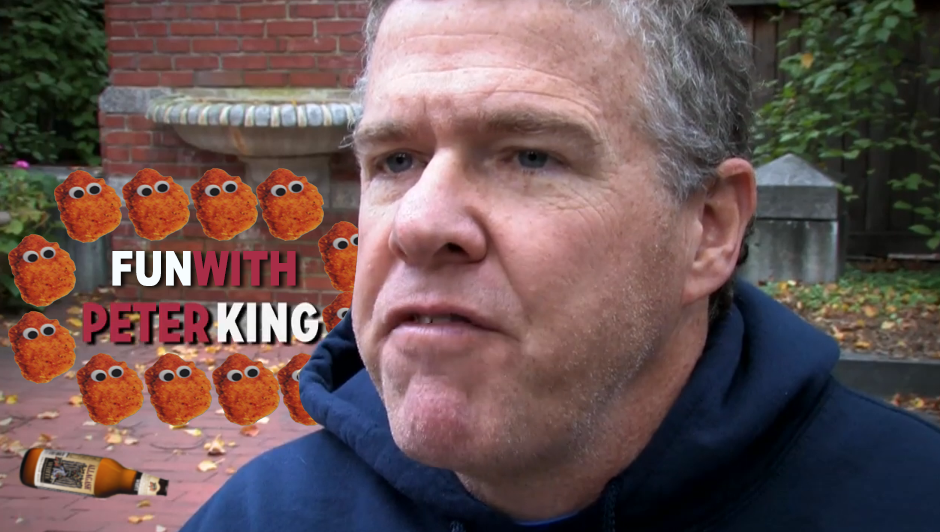 Last week on THE PETER KING ADVENTURES: everyone died, Peter opined about it, and then Peter died, Ape died and the MMQB column came to abrupt end.

It’s here forever because life is perpetually unfair and the column is an infernal, bubbling cauldron of egocentricity. Ape’s actually alive though! So that part is good.

In any case, what nuggets of navel-gazing does Peter have for us this week? Can Jameis Winston survive the intense pressure of being THE MOST SCRUTINIZED DRAFT PICK SINCE SOME GUY LAST YEAR? Let’s find out!

The Most Scrutinized Draft Pick of All Time

was on the phone Sunday, a day after the poking and prodding of the NFL combine here, and I asked The Most Scrutinized Draft Pick of All Time

Pronouns, Peter! Try a pronoun like “him”! It saves words so your column doesn’t turn into 18,000 bloviating mouthfarts.

if he was ready for the private detectives from multiple teams and intrusive questions and the 30 hours of one-on-one time with one team alone (Tampa Bay GM Jason Licht’s estimate) that he faces in the next 66 days, between now and the first round of the NFL draft.

(Winston): “Character is what you show when no one is looking. I believe if they do a hard, hard investigation into Jameis the person, they will find out that I’m a good guy.”

If only some other kind of investigation into this very thing had already happened. Why, it could save some people a lot of time! But no, there aren’t any skeletons in the closet here. Investigative groups that functionally kowtow to football teams always do the best job.

But then he (Tampa Bay GM Jason Licht) pulled out his smart phone and said, “If I see a good play I want to keep, I put it on my phone,” he said.

OH MY GOD DO YOU HAVE EXPRESS WRITTEN CONSENT OF THE NFL/NCAA? They are going to COME AFTER YOU if you don’t, Pirate Boy.

“Look at this one from Jameis. I was actually at this game.” With that he touched the screen a few times and called up a play from the 2013 Syracuse-Florida State game, and held the phone out for me to see.

Peter copies and pastes Winston’s answers for a few paragraphs and then wonders aloud if he’ll want to play two sports. (No one thinks he will), but Peter’s gotta plant that seed, right? Because if it becomes a bargaining chip later, he can say “WELL I’VE ALWAYS HAD MY RESERVATIONS YOU SEE”.

But maybe this is the spur that San Diego needed to convince its electorate that the Chargers really might move. The city task force’s announcement Sunday that it would make its decision on whether to move ahead with a new stadium within three months was the most encouraging thing to come out of local government for the Chargers in years.

Everyone knows this is a power play, right? They both aren’t going to go to one stadium. This is the Chargers cockslapping the city government in the face and demanding a toy. Peter writes it up like this is some dangerous threesome between the Raiders/Chargers/Rams (ew), but really, does anyone think another team other than the Raiders will move to LA? Oakland’s stadium is actually filled with shit any time it rains, they play second-fiddle to the Niners, and Baby Davis is going to want to put his mark on the team. San Diego? We’ve seen this sort of shit from any team who wants a stadium. The Chargers aren’t going anywhere.

Could the Rams actually trade star-crossed quarterback Sam Bradford to the desperate Browns? It’s unlikely, and the biggest reason is that Cleveland would almost certainly not want to trade something significant for a quarterback, pay him $14 million in the last year of his rookie contract, and face the prospect of him being a free agent after just one season. But everything besides that in this story does make sense.

Well, except for these AMAZINGLY GLARING HOLES IN THE ARGUMENT, the story makes sense. I mean, it makes sense to plug into a headline for pageviews. Shit. I’m going to do that right now. THANKS FOR THE WRITING TIP, PK!

The most interesting development recently in terms of the 2015 free-agency class is the acknowledgment in Denver that there’s a legitimate chance that the Broncos don’t want to pay tight end Julius Thomas fair market value for his services.

Um, everyone knew that. Like, every Bronco fan knew that the team was going to lose Julius Thomas because the team thinks he can be more easily replaced than Demaryius Thomas. You see, there’s a thing called a salary cap, Peter. It means a team only has so much money to give to players to ensure financial fairness, and thus some leave via ‘free agency’. Congratulations on discovering the same ‘development’ we all assumed was reality in October.

FACTOIDS OF THE WEEK THAT MAY INTEREST ONLY ME

This Week’s Sign That The Footballpocalypse Is Upon Us:

The number of media members covering the combine has risen 5,300% in the past 15 years.

The math: Approximately 15 to 20 reporters covered the combine in 2000. This weekend, the NFL credentialed 1,071 media members—and turned away quite a few (mostly college media people, who used to be credentialed)

because of space restrictions. Meaning this: For every one reporter who covered the combine in 2000, there were 53 this year.

Gosh I wonder if the rise of vanity websites with 37 page NFL articles and a 24-hour sports news culture across five networks, including one dedicated just to that sport have anything to do with it. It used to be in the old days Peter could reserve an ENTIRE FLOOR of the hotel. Now he has to share one with PLEBS.

My friend Jack Bowers had a bout with the same cancer that killed Stuart Scott, cancer of the appendix, a few years back. After several surgeries, Jack is in a good place and on track to live a long time. But a byproduct of having a brush with a very serious illness was he stopped putting off things he loved to do. He just started doing them. I have been a partner in crime with Jack for a couple of them, including a World Series trip to San Francisco, and he told me a few months ago he wanted to go back to Duke, where he went to school in the seventies, and see this year’s Duke-North Carolina basketball game at Cameron Indoor Stadium. So we procured a couple of nosebleed seats and I put off the combine for one day, and we went to Durham last Wednesday for the game.

I, in my most altruistic nature, took a day off of sports to go watch sports. And my goodness, Peter King covering a Duke game introduces an otherworldly level of smarm here. It’s like I can feel his lofty disdain for those of us who don’t have $lolmoney.

I now can strongly recommend adding this to a big sports fan’s bucket list. (A wealthy sports fan, or one with a kind friend who has Duke season tickets and is particularly generous.)

Peter wants to make sure you realize just how much money (and/or connections) it costs for him to go attend games with his cancerbuddy, who we, of course, never hear from again once PK is introduced into the picture. It’s cool to use folks with life-threatening diseases who want to live out their dreams as nothing more than a lede-in.

…Lunch on the Carolina campus nearby, working out in the student gym next to Cameron in the afternoon (running on a treadmill, feeling totally inadequate, between two women’s track team members who idly chose iTunes selections while motoring along at 8.0), shooting baskets in the gym…

Wait, how the hell did you get access to the student gym? They’re specifically set up to be just for students – they rail on that shit during the campus tours to appease terrified parents that their child isn’t going to be abducted from the gym. Hell, even faculty and staff can’t use the student gyms. Were you the only sweaty middle aged man lumbering on a treadmill there? Did you think that would – possibly – be completely and utterly creepy for everyone else who was there?

I met Zach Fuchs, a sophomore from Bethesda, Md., at his tent the afternoon of the game. He and nine friends had the third tent in line, a beige tent he let me see (and smell) situated on pallets and plywood, directly behind the “KRZYZEWSKIVILLE” sign.

Oh boy, let’s see what a discussion between Peter and a trust-fund Duke kid is like.

TEN THINGS I THINK I THINK

Gee, really? A top two quarterback not falling past a bunch of teams who need quarterbacks? YOUR INSIGHT IS UNMATCHED, LORD PAUNCH.

No no, go the baseball route and spend fifteen years moralizing each and every pick in a column instead! Why write rules in place to make sure people are decent enough human beings for the highest praise when you could ADMONISH THEM YOURSELF! You get to be the judge AND jury!

It’s Indianapolis, Peter. You should know by now that exchanging pleasantries includes the customary swapping of mayonnaise jars. God, you inconsiderate cur.

NEWSFLASH: #BRAND DOES THING TO PROMOTE ITSELF AT EVENT THAT CATERS TO FOLKS LIKELY TO BUY AND/OR ENDORSE THAT PRODUCT.

Ape is back next week
To take on Peter’s bullshit.
Today’s point: Fuck Duke