Happy Birthday, Phil Knight! Here Are 5 Things You May Not Know About The Nike Icon

Considering the powerhouse Nike has become — its sales pushed $28 billion last year — it’s amazing to think the whole thing originated in the trunk of Phil Knight’s car. The future Nike founder and CEO famously hawked sneakers hand-altered by legendary Oregon track coach Bill Bowerman at track meets and such, and somehow, he spun that into one of the most enduring brands in history.

At a base level, Knight has obvious talents and vision that put him in an upper echelon as an executive. But it’s still instructive to take inventory of some of the things that went into building him into one of the most powerful men in sports. After all, to use the example of Nike’s most successful avatar, Michael Jordan wasn’t always Michael Jordan. Ostensibly, we all have to start somewhere.

“Sometimes I look out there, and I get goosebumps,” Knight once said about Nike’s expansive campus. “But you better not spend much time doing that because every six months is a new lifetime, and you’ve got to worry about what’s coming up to stay ahead of the curve.

“If you want to spend time saying this is cool, you’re going to get your ass kicked.”

Knight turned 77 today, appropriately sharing a date of birth with fellow master entrepreneur Steve Jobs (not to mention Floyd Mayweather; it was a good date for self-made tycoons). To commemorate Knight’s birthday, here are five things we love about Phil Knight that you may or may not know.

If you never knew why Nike made sneakers to commemorate stop-motion animated films like ParaNorman and Boxtrolls, it’s because Phil Knight actually owns the company that makes those movies. After a brief attempt at becoming a rapper, Knight’s son Travis continued to eschew the family business, taking a position as an animator at a company named Vinton Studios.

When Vinton hit hard times after 9/11, Phil rescued it from bankruptcy, becoming the top shareholder and installing Travis as an executive. Now known as Laika, the company’s first big hit was the wonderfully creepy Coraline, for which Travis was the lead animator. If you want to celebrate the Nike founder’s link to stop-motion animation, all you need is a spare $3,700. By the way, the Roshe Trollstrikes, designed by Tinker Hatfield, raised money for a foster charity.

I’m foremost a fan of Nike, but I’ve always found myself at least a little attracted to Onitsuka Tiger sneakers. The original sneakers sold by Phil Knight were Onitsuka samples purchased directly from a factory in Japan for a grand total of $50.

It would seem obvious that when it comes to running shoes, the lighter the better. Yet, pre-Nike sneakers tended to run bulkier. After writing a paper on the subject at Stanford Business School in the 1960s, Knight became fascinated with the lighter sneakers that were prevalent in Japan. On a post-grad trip to the Far East, Knight made up a company on the fly — Blue Ribbon Sports, he called it — and purchased some fateful samples that were mailed to him a year later. Bowerman made manual adjustments to the sneakers, and Knight would sell them out of his trunk at track meets.

When Onitsuka wanted a piece of the running boom and began a protracted legal battle, Knight and Co. made a clean break, found their own manufacturers and came up with the name Nike. Bowerman invented the game-changing rubber sole, and the rest is history.

“In those days, I wasn’t thinking about markets or fortunes,” Bowerman said in 1981. “I was making better shoes a foot at a time. I left everything else up to Phil Knight, and believe me, he’s a genius.”

Would Nike have become its own entity if Onitsuka hadn’t pulled a power play? Intuition says that Knight would have reached that conclusion on his own. But if you’re interested in visiting an alternate reality, Tigers are still available to purchase, or you can channel Forrest Gump and Kendrick Lamar by picking up a Nike Cortez, which Knight helped develop for Onitsuka.

Like it or not, our parents have tons of influence over our life paths. Given that they financially support us for the majority of our early lives, it’s almost a loan we pay off simply by not screwing up as we get old enough to make our own decisions.

Luckily for the entire sneaker world, Phil Knight had the wherewithal to push ahead when his father didn’t necessarily approve of his desire to start a sneaker company rather than having a secure, but relatively mundane life as a CPA.

“Basically, it broke his heart,” Phil told Fast Company. “I can almost never remember him giving me a compliment. It was, ‘You can do better.'”

Knight cultivated his vision anyway, and you can see the results on the feet of people all over the world. His experience also manifested itself with his own son; though he was skeptical, he came to nurture Travis’ interests in hip-hop and animation. Let this be a lesson for those of us who might be parents someday. Sometimes, it really is best to simply let our progeny go their own way.

4. Practice what you preach

I consider myself a relatively decent recreational runner; I started jogging about 15 years ago, and I’ve done two marathons. I’m hardly a speed demon, but my fastest mile time — recorded a few years before I turned 30, and everything started breaking down — was a respectable six minutes flat.

Phil Knight’s personal best? A weekend warrior-shaming four minutes and 13 seconds, achieved while a middle distance runner for Bowerman on the Oregon track team. (Bowerman’s revolutionary advice to Knight? He used to holler at him, “Run faster!” Simple, but effective.)

It’s no coincidence that LeBron James’ sneakers sell the most of any other current player. There’s still a feeling that if it works for him, it works for us. It similarly makes sense that running shoes in this country were revolutionized by someone who wasn’t just an athlete, but a true winner in his sport.

“If there was no track, there was no me,” he told the Des Moines Register in 2009. “I would be somebody entirely different, and there wouldn’t be a Nike. It all came from there.” 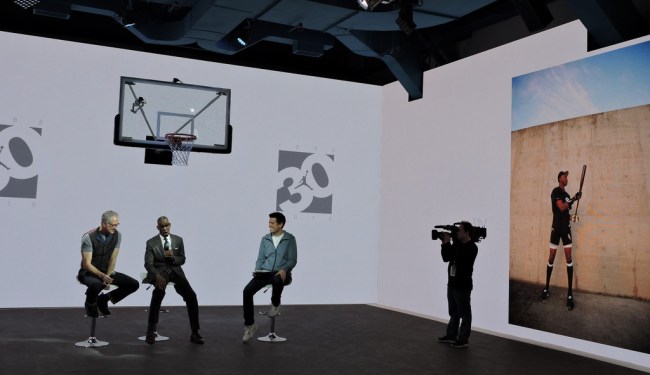 It often seems like everything a great visionary touches turns to gold. But if you need evidence that this isn’t always the case, Phil Knight nearly short-circuited a $3 billion-plus sector of his industry before it truly took flight.

At the Jordan All-Star Experience at Pearl Pavilion, Tinker Hatfield held a Q&A in which he recalled the uncertainty that hit the company when Michael Jordan retired for the first time. Hatfield was in his home studio on a Sunday working on the Air Jordan X, when Knight called and told him they were heading to Chicago the next morning to join MJ as he announced his retirement.

“I told Phil on the phone, ‘I’m right in the middle of trying to finish his 10th shoe,’” Hatfield said. “He goes, ‘Well, you might as well just… stop. It’s the end of an era. It’s been a great run. We’re going to go out and celebrate with Michael his entire career.’”

To his eternal credit, Hatfield deduced — correctly — that Jordan was merely taking a break from basketball. When he got off the phone with Knight, he proceeded to continue working on the X. With Jordan playing baseball, the sneaker was halfheartedly marketed. The entirety of Europe ordered zero pairs, but Hatfield believed in the future of the Jordan brand when few others did.

“That was the overwhelming and prevailing attitude at Nike in 1994: ‘It’s over. It’s done,’” Hatfield said in the book Driven from Within. “I felt like I was at a point where I had enough clout that I could keep the development of the Jordan XI going single-handedly. I chose to keep a certain percentage of my time dedicated to keeping the brand alive.”

Major League Baseball went on strike that year, and Jordan faxed his famous two-word return. Against Hatfield’s advice, he would wear the XI in the playoffs that year to much fanfare, and away we go.

Obviously, Knight had miscalculated the situation. The fact is, Hatfield was a trusted member of his inner circle. He was even tasked with rebranding the football uniforms for Knight’s beloved Oregon, which elevated the entire program, and he became something of a visionary himself.

When it comes down to it, a big part of being successful is having the wherewithal to put the right people around you. A little luck never hurts, either.