Last spring, two young girls, Morgan Geyser and Anissa Weier, were charged with stabbing their friend 19 times, in what they said was an effort to prove their allegiance to Slender Man. This week in court, images were shown from Geyser’s bedroom, including mutilated Barbie dolls and drawings with the words “I love killing people.” 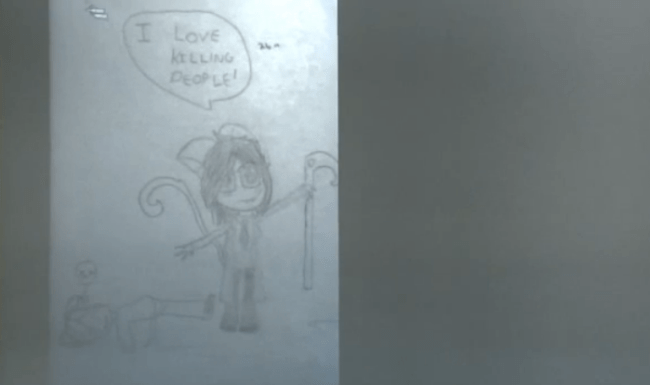 Additionally, a supply list was found in her bedroom with items like pepper spray, a map of the forest, weapons and “the will to live.”

According to Fox 6 News, both girls have been found competent to stand trial, but Geyser has been diagnosed with schizophrenia.

“An enduring belief in the reality of Slenderman, a fictional character. Morgan’s belief in vulcan mind control, and her belief, conviction that she has relationships with Harry Potter characters. She thinks they’re real people,” Psychologist Dr. Deborah Collins said.

Collins testified Geyser’s unyielding belief in Slenderman led her to fear the creature would hurt her and her family if she didn’t kill her friend.

Both girls are charged with first degree attempted homicide. Their victim, also 12, survived.