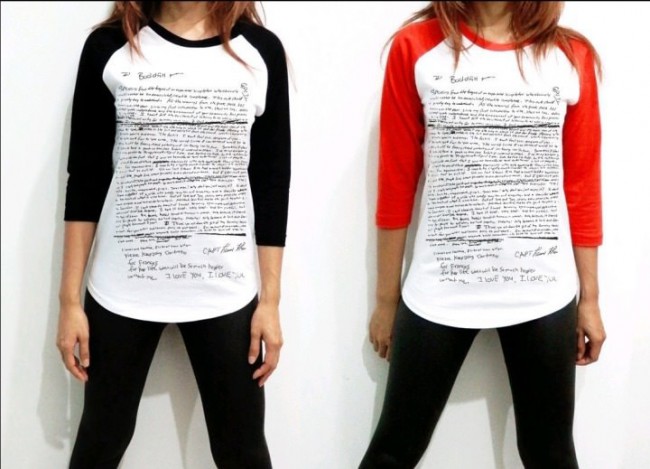 In life, you can count on but two things: people are terrible, and they will sell anything — no matter how crass, tasteless or in poor taste. This includes, apparently, Kurt Cobain’s suicide note as a shirt. Who would even want that?

Ask and ye shall receive, person on Twitter. In black, red or a tank top for all your accessorizing needs!

An Etsy store — I know, I was shocked it wasn’t Urban Outfitters, too — has been selling T-shirts with Kurt Cobain’s suicide note on them. As expected, the internet was outraged. A Change.org petition was created asking Etsy to pull the shirts and issue a public apology.

It has recently come to my attention that small independent businesses all over the web have been selling merchandise (ie, T-shirts, tank tops, etc) with Kurt Cobain’s very real suicide letter printed all over them.

This not only is a huge insult and slap to the face toward the legend Kurt Cobain himself, but as well as to all of his loved ones, his devoted fans, his legacy, and most importantly people around the world who currently suffer with mental illnesses of their own such as depression, anxiety and self image dysphoria.

Mental illness and suicidal behavior is not a fashion statement, and it is not meant to be glamorized or flaunted about on a t-shirt. These shirts do nothing but encourage impressionable minds that these tendencies and behaviors are something to be displayed proudly or as some sort of cool status. Wearing this merchandise is no different than wearing a shirt with a depiction of a plane crashing into the World Trade Center.

I am formally asking all businesses that carry these utterly disrespectful shirts (as well as all other merchandise with the printed note) to formally apologize for ever selling them in the first place, and to immediately discontinue the distribution of said products.

This is so disrespectful. Don't use Kurt Cobain's Suicide Note to get money. Suicide is NOT a fashion statement. pic.twitter.com/A5Z1OuSUBd