This Woman Snapped Back At Her Homophobic Aunt So Hard, She Gave Her A Case Of Whiplash 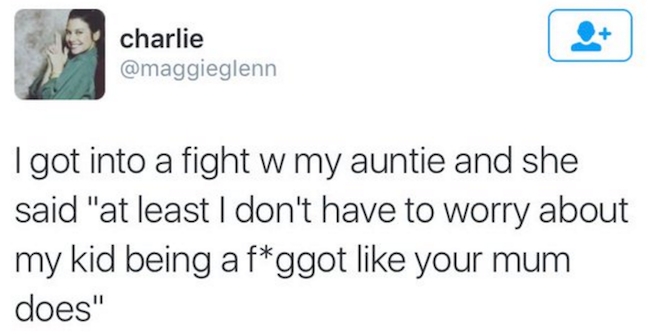 It used to be that you only had to see your homophobic aunts and uncles during the holiday season, when good cheer and a cup of their preferred spirit would allow them to feel comfortable and let loose a litany of bodily noises (oh, you didn’t have a farting grandma?) and their very embarrassing beliefs about race, culture, gender, and homosexuality. But now the internet’s made it possible for anyone to share their opinion at any time, as long as they can use Twitter, Facebook, or text. Such was the case for one bisexual woman named Charlotte who had to lay the smackdown on her idiotic (no, I’m not using that word lightly) aunt for pointing out that gay people were “drama.”

Oh, wait, no, that came after when the aunt “apologized.” Originally, she’d just said she was lucky not having to worry about having non-hetero kids. Because as we all know, all gays, lesbians, and bisexuals are just having sex all the time. Also, as we all know, no one can just have a sexual orientation that’s not classified as heterosexual and “not be about it all the time” flaunting it at children’s birthdays and such. And that was exactly Charlotte’s aunt’s problem with the whole thing. So, of course she wrote her niece a message of love and support.

And, of course, it was just as disgusting a message as you could imagine, full of reminders to seek help (for all that gay) and not to show up to family events because people deserve happiness on special days (unless they are gay). Here check it all out for yourself:

While some relatives are understandably outraged that a young woman would speak to her aunt in the way that Charlotte does, as someone who’s been in her position — a cousin once asked me if I was gay because I’d been molested as a child or dropped on the head, as those were the only two possible versions of why sexuality is a beautiful spectrum in his head — it’s impossible to fault someone coming to terms with her identity calling out someone she loves and cares about for rejecting her based only on her sexual orientation, something that the aunt in this story clearly knows nothing about. Plus, Charlotte’s 18… that’s how we all dealt with adults who were awful at that age.

What this story illustrates, aside from the fact that Charlotte needs a more supportive family who will stand up for her, is that there’s still a long way to go when it comes to acceptance of the LGBT population. Not only does Charlotte’s aunt not feel like she’s done anything wrong, but is appalled that Charlotte would respond in a negative way. That suggests she’s not being malicious, just ignorant. Doesn’t mean people like Charlotte cant’t fight back, but it also means that people like her aunt need to be educated. Especially when it comes to the fact that the only person ruining a party because of someone’s sexual orientation is the person who won’t shut up about it. And it’s usually not the person who’s just come out.

Is Charlotte a hero? That’s not a great question because we throw that word around too often. Is she a badass for saying “suck it” to her family and sticking to her guns? Absolutely. Congratulations on your fame, Charlotte. (You too, aunt Marie… sorry, Indie.)