Being a woman in the hardscrabble world of online dating is no easy task, especially when we’re plagued by one of the scuzziest, weirdest, and unasked for things of all time: unsolicited d*ck pics. Why do guys think this is what women want to see? It’s one thing if we ask for it, but who actually asks for that? One woman turned the tables on the men of the online dating scene and sent them pictures of her own junk to see if they appreciated it as much as we did. (Which is zero. We don’t appreciate it.) The results were… actually predictable.

This brave behavioral warrior is Thrillist’s Kerry Quinn whose mission was to send “pre-emptive v-pic” to 40 male users on the dating site Bumble before they could send a “d-pic.” (It should also be noted that “v-pic” should be read as “vulva pic” because unless she has access to some serious gynecological equipment, these are pictures of her vulva because her vagina is the canal on the inside. Got it? Good!) It wasn’t her junk, but it was a closely-matched stunt vulva found on the internet. After making the first move on Bumble (which falls on the women), Quinn waited for responses to pour in to engage in short exchanges before laying her precious gift upon them. 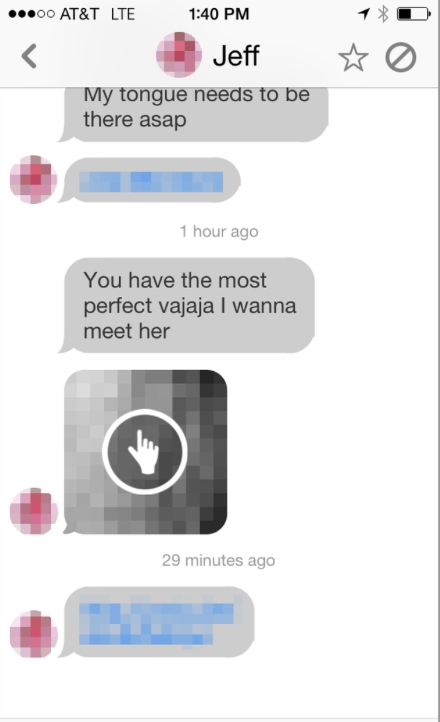 In screenshots posted on Thrillist, Quinn displayed the very enthusiastic responses, not including the d*ck pics she got in return. But in the end, the 37 out of 40 men who responded to her v-pic wanted to meet her in person, most of them outlining exactly what they wanted to do to her when they did. So that’s… predictable, considering the general kind of horndogs who use online dating for hookups and anonymous perving around.

Only one of these men had received a v-pic before Quinn’s. Maybe because women know how screwed up it is to send pictures of your genitals when no one asked.