This Week In Posters: Jack Sparrow Has Knuckle Tats, And Other Revelations

This week in This Week In Posters, it’s like every studio saved up all their titles and released them all at once. We’ve got Guardians of the Galaxy sequels, new Trainspotting, Power Rangers, and Fifty Shades movies, a new limited release starring Nicolas Cage looking ridiculous, and more! So let’s just get into it, shall we?

First, This Beautiful Fantastic, starring Jessica Brown Findlay, my favorite Downton Abbey contestant. Look, if JBF and Tom Wilkinson are in it, I’m totally there, but this makes me wonder if there should be an indie movie moratorium on “wonder,” “beauty,” “fantastic,” etc. “This Beautiful Fantastic” is like an indie mad lib title. “This Wonderful Beauty,” “This Fantastic Enchantment,” “This Enchanting Wonder,” “This Spectacular Beauty,” This Wondrous Spectaculiforous….”

All this poster really tells me is that the filmmaker probably likes Amelie.

I like this poster because I finally know Spud’s real name. I’m probably still going to call him Spud though. Has Ewen Bremner been a victim of his own Spudness? Discuss.

Of all the Trainspotting 2 character posters from this week, “Sick Boy” is the only character whose name got a translation into whatever Slavic language this is. Really? No foreign equivalent of “Spud?” Another thing I notice is that Scotland’s ex-heroin addicts are much snappier dressers than ours. Here in San Francisco the standard uniform is a sweater with a cat on it and some jeans that look like they went through a cement mixer. Lotta onesies as well.

I don’t know what sorcery the Trainspotting 2 marketing team are pulling, but I haven’t really liked a Danny Boyle movie in 15 years and 20-year-old overdue sequels are usually just sad, but every time I see a Trainspotting 2 thing some small voice inside me goes “Oh hell yeah, I can’t wait for this.”

What is happening to me? Are all my usual sequel rules suspended if the movie was about pooping and heroin?

Ewan McGregor should have to wear shirts as tiny as the ones he wore in the original. That was always the toughest thing for me to swallow about the original — not him swimming through the toilet or the baby crawling on the ceiling, but the fact that Ewan McGregor went out to a club wearing a t-shirt clearly meant for a small child and no one said anything about it. You needed an electron microscope to see that t-shirt.

Robert Carlyle really should’ve played one of the dwarves in Lord of the Rings. I’ve never been so afraid of a tiny, furry man.

I don’t remember the exact plot of Mighty Morphin Power Rangers, but any way I describe it it sounds like the most insane premise ever. Anyway, it looks like they borrowed Michael Bay’s Transformers aesthetic here. Where everything is shiny and pointy and busy and covered in flames. Every character looks like the font on a Mudvayne album.

Wait, Jack Sparrow has knuckle tattoos now? I admit I haven’t seen a Pirates movie since number three was like seven hours long and so aggressively dull I was willing myself to fall asleep in the theater, but I don’t remember that. And the knuckle tattoo says… “JAKC?” Am I reading that correctly? So someone thought that what was really going to get people excited about Jack Sparrow again was knuckle tattoos, and now that tattoo is his own misspelled name and it’s the focal point of the poster? Feel free to correct me if I’m getting any of this wrong.

Anyway, it’s a cool poster, but it’s hard to go wrong with an image from Moonlight.

Is anyone else shocked at the restraint of not making the trail of torches into a Z?

We’ve talked about the horror movie poster eyeball poster cliché, but the foggy handprint has to be a close second. Also weird that the hand is inside the helmet of a space suit in this case. Like, I think this is supposed to be scary, but it also sort of just looks like there’s a small child climbing around inside a big space suit.

Didn’t someone in the comments make an Ape-ocalypse Now joke the last time I posted a Skull Island poster? It’s like we willed it into existence. Anyway, kind of a weird concept. I’m just imagining the gorilla from Congo signing “the horror, the horror…”

John Wick: Chapter 2 has the best posters, and they haven’t even done one with the pit bull yet.

Oh thank God, it wouldn’t be a proper This Week in Posters without a Nic Cage title that I’m probably going to see in a drug store bargain bin in six years. Is this one about… burning oil wells? If so what’s with the cop over there on the left who looks like he’s shooting at the sky? Not that it really matters. Clearly the draw of this movie is Nic Cage and his eyebrow. No one can evoke concern for humanity like that guy. That’s why Tom Hanks always kind of looked like Nic Cage in the Da Vinci Code movies. At a certain level of “10 million people are gonna die!!” everyone looks like Nic Cage. That’s just what being the only one who knows the world is going to end does to a person.

I enjoy this poster for Guardians of the Galaxy 2. There I am, casually scrolling through the cassettes of all the cast names, and boom! Baby Groot screaming at me from the top rope.

If I had to pinpoint the seed of The Great Wall‘s marketing campaign, it’d be “lots of flying stuff.”

So the last hope of humanity is some child Hannibal Lecter? I like it.

Apparently this movie is about dancing, and the poster designers made the strange choice to keep the girl still and make the background dance around her. I guess that’s so you know it’s, like, serious dancing.

Deception. Ah, because he’s wearing a mask, I get it.

Wait, her mask is a woman wearing a mask? Whoaaaooooaaaa.

MYSTERY. Who is this actor?

Passionate about doily masks, I guess. “Oh Christian. Put on your doily mask and boink me.”

Here’s a nice doggy in front of a drawing of… a family, a football, and a syringe? What the hell is happening?

That this one is just a house and a family and a football makes the last one even more sinister.

The syringe thing is still creeping me out. Are the drawings supposed to be what the doggos are dreaming about? If so, the corgi should have more sheep ankles. (I always wondered how corgis were supposedly herding animal when they’re so short. Apparently they herd by nipping sheep/horse ankles.)

Okay, this one has a gun and a cop car — oh, I get it, he’s a K9 cop dog. So maybe… the syringe one is a drug-sniffing dog? That sort of makes sense now. Even so, I doubt the drug-sniffing dogs find many actual syringes full of drugs mid-squirt. Probably should’ve gone with a drawing of a pill bottle or a pot plant or something.

Creepy kid, haunted house, demonic possession, forests — horror poster imagery is pretty plug and play at this point. This one gets extra points for being so literal. Usually it’s just a lame forest that’s supposed to be scary for some reason. This one’s like, “nope, there’s an actual forest demon, here’s what he looks like.”

Dane Dehaan is either singing back up in a doo wop group or battling some kind of water demon. Question: are the demons literal or metaphorical? I don’t know the answer, but I really like his chipped tooth, it kind of ties the entire poster together. It’s quite striking.

Bokeh, well it looks like an interdimensional love story. Cool, cool. It has lots of diagonal lines, but they didn’t do it by just turning everything sideways for no reason, which is nice. 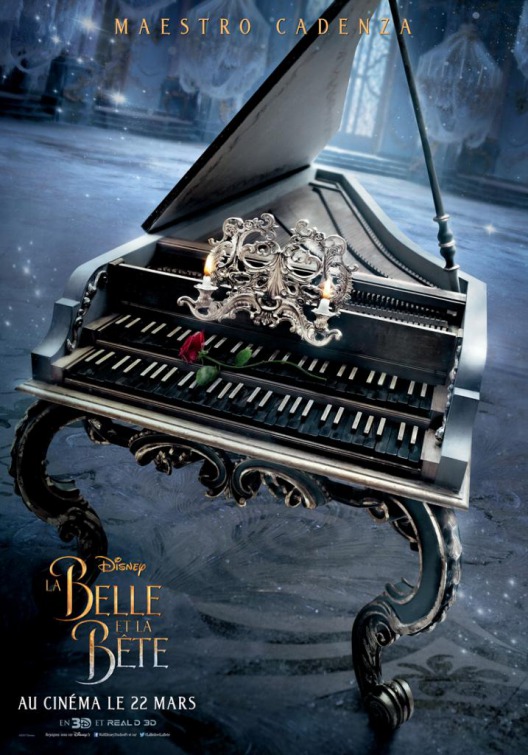 Wait, what was that thing I just said about not turning the poster sideways for no apparent reason?

Ah, so “Madame De Garderobe” is the wardrobe? Wordplay! Anyway, like I said last week, the 17th century was a Willy Wonka-ass time.

If there’s a bird duster how come everything in there is so dusty? Lazy ass bird, should be fired.

Samovar — that’s a tea thingy, I knew that! You think they gave the samovar a Russian/Turkish accent?

This guy is kind of scary. This is going to be a weird ass movie.

This could easily be a horror movie. Imagine that wide-eyed, sad face clock chasing you around the room.

Wait, so the guy has to wear ten layers of frilly neck ruffles and stiff epaulets with four rows of carved silver buttons but his lady gets to roll around with center-parted hair tied back and a ballerina dress? She must get so sick of waiting for him to get dressed. I didn’t realize the Beast was such a dandy.