An Entire Team Had To Help Me Beat The ‘Far Cry: Primal’ Hands-On, And It Was Effing Awesome

I’m an hour into the Far Cry: Primal demo before I realize that the goat I’ve been chasing for the past fifteen minutes is, in fact, a rock. If I were a real caveman, tasked with finding dinner for my clan, I would be considered a colossal failure. Perhaps the other cave people might even murder me. As it stands, that might be a little less embarrassing than catching the game’s associate producer looking at me in horror as I happily pull back my arrow over and over again, oblivious to the fact that the prey I’ve just ambushed and mercilessly slaughtered is dead already. Because it was a rock. It’s been dead forever. The goat is prancing around in a field off-screen.

This desperate failed attempt at hunting is my first experience with the Far Cry series. I’m not a first-person gamer (I get simulator sickness swiftly and very, very badly), so when I discovered that the game would feature a vast, densely-populated landscape that I’d have to navigate as if I were actually looking at it through the character’s eyes, I was a little concerned. But there’s something about the fact that I’m not sitting at home in my underwear–rather, I’m playing at Ubisoft’s event space, which has been transformed to resemble a cave (with, you know, a fully functioning coffee machine)– that turns my anxiety into adrenaline, and five minutes after I’ve stalked and killed a rock, I bag my very first goat, happily skinning it as I look around to see if anyone’s doing as badly as I am. No one is. I’m grinning like an idiot. “Do you need some help?” the game’s creative director Jean-Christophe Guyot (J.C.) asks me.

“No, uh, just taking a break.” I say. I’ve still got two more goats to kill before I can move on, but I can’t tell him I want to bask in my victory for just a second longer.

If you’re not familiar with Far Cry, Primal‘s a great way to get into the series. Set in an ancient time when survival was the only goal, the game starts off with a short countdown taking you from present day to the period of cave drawings and herbal medicines. You’re given some quick backstory–you and your tribe are looking for a place to settle and build a community–and then you’re let loose. For the full experience–if accidentally setting an entire forest on fire, as I did, isn’t enough–you can even turn off the subtitles and try to make your way through the game using only what you gather from the grunts and intonations of your fellow tribespeople. Unlike other games, where you’re asked to suspend disbelief and believe that ancient people spoke perfectly accented English, Primal translates for you, but the characters themselves don’t speak the language. It’s a nice immersive touch and something that advanced gamers might like to try if they’re really into figuring out the story on their own. If you’re a novice gamer, however, the subtitles provide a bit of nice structure. Especially when you keep dying over and over again because you don’t understand the directions. And while exploration is key to the Primal experience, the game starts you off with a fairly lengthy in-game tutorial that helps you cover all your bases. Unless, like me, you’re hopeless and find yourself drowned in a river you weren’t supposed to go near in the first place.

“Oh no! What happened?” J.C asks me as I fall into a deep dark hole while exploring a cave. “Can you see where you are? Use your fire!” This is easier said than done. The game takes survival very seriously, so sometimes you run out of things like animal fat (for fire) and wood (for arrows) in places where they’re hard to find. J.C., who’s a wiz at the game, tells me that I have only one option as I’m floundering around underwater. “You must die,” he says, his English heavy with the romantic melancholy of his French accent. “You must die and try again.” Then he checks to see if I am on easy mode (I am) and if I’ve got aim assist on (I do). He sticks around to help me through the cave.

In other games, dying can be an exceptionally unpleasant experience, but in Primal, it’s a minor setback. The checkpoints are generous, the gameplay moves along quickly enough that dying once or twice feels like part of the fun instead of as a punishment, and the game is always willing to give you a little bit of help via on-screen instructions that remind you to use a weapon or go into hunter mode (a fancy way of saying “press a button to see your objectives and usable/killable objects outlined”). I’m familiar with how forgiving this aspect of the game is because I’d died immediately upon starting the game, when I tried to kill an adult wooly mammoth with a makeshift spear. And again when I accidentally set myself on fire and didn’t quite know how to put myself out again. While the game gives you plenty of room to decide whether you’re going to kill or sneak later on, the first hour is fairly straightforward, giving you a real idea of how dangerous it is to be alone in the wilderness, the rest of your tribe (apparently even worse survivalists than someone who shoots a rock to eat for dinner) dead and counting on you to keep their legacy going.

“I couldn’t kill the woolly mammoth,” I tell Paola Jouyaux, the game’s associate producer, while I take another break about ten minutes after J.C.’s helped me through the cave. At this point, it feels like there’s a protective little group around me, making sure that even if I’m not enjoying myself (which I am, immensely) that I at least get through the demo.

“The big one, at the beginning.”

“When all your friends were running? Why did you not run, too?” She asks in surprise, shocked that anyone would try to take on a fully grown wild animal with what amounts to a level one spear.

“I thought I was supposed to kill it.”

“No, you can only kill the babies!” She laughs. “You are not yet strong enough in the beginning to take a woolly mammoth on by yourself.”

That’s a lesson I have to remember as I keep playing. Unlike games in which you’re already adept at doing everything, in Primal, you learn along the way. You learn how to shoot an arrow, how to light a torch, and how to not set an entire forest on fire because you thought the leaves you were looking at were hallucinogens and wanted to see what it’d be like if your character ingested their smoke (there is some precedent for this, I’m told later; at least one of the other games in the series allows the main character to get high on magic mushrooms). You learn how to kill a goat. And then a wolf. And then a jaguar. And then you move on to killing other people, from enemy tribes, whose only goal is to capture the people you love and murder them (for what reasons, I do not know). The learning curve’s not steep–it’s no Dark Souls–but even the first few hours provide a decent challenge as you make your way through the beautifully rendered landscapes.

While the controls are a little difficult to master at first (I had a hard time figuring out what button to press to switch weapons and kept accidentally returning the game to the PlayStation start screen), the art is so beautiful that you’ll forgive any clunkiness because you’re too busy looking around the beautiful game world. The caves are dark and gloomy, the forests are lush and vibrant, and the animals that you hit over the head until they die are beautifully rendered. It’s an epic experience, visually, and it really does feel like the game world is huge. As for other human characters, I didn’t feel much at the beginning when my own tribe was dying (probably because I hadn’t yet resigned myself to the fact that I could only kill the baby mammoths), but I certainly felt some terror when the rival tribespeople started shooting arrows at me as they killed the people I was trying to rescue.

Texts that I sent my editor detailing my gameplay experience: 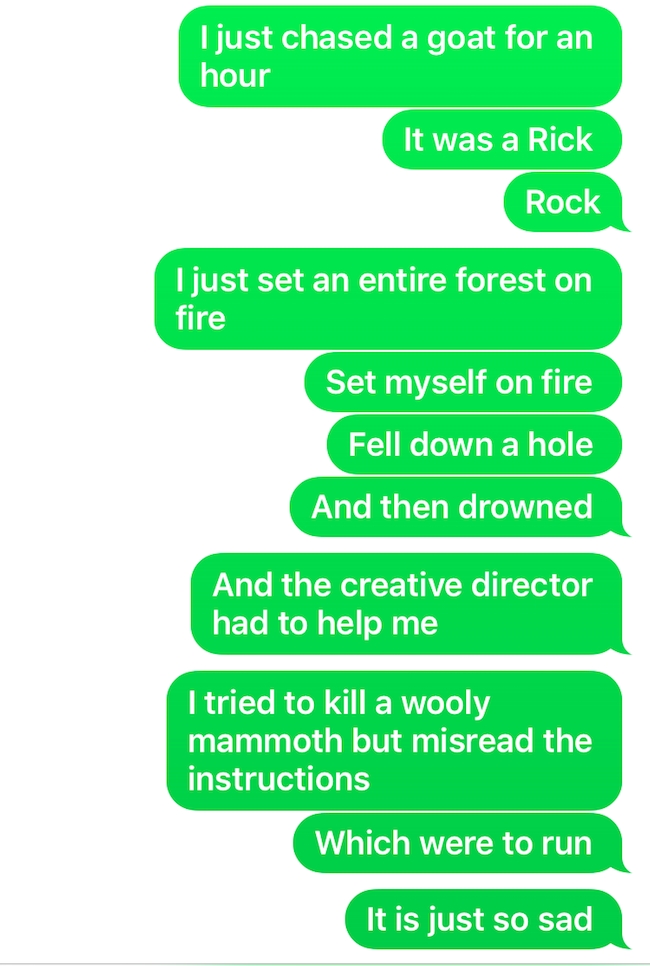 The most unique aspect of the game–besides the fact that you can set a forest fire at any moment–is its beast master element. Somewhere along the way (the demo was split into two parts so it’s not clear how you get your companion animal), you adopt a non-human creature who helps you hunt and kill. In my case, it was a wolf that I immediately tried to bludgeon to death for following me because I wasn’t really sure what was happening.

“No! No!” Paola, who’d been standing behind me, cried as she put her hand on my shoulder. “That is your friend! That wolf will help you! You cannot kill it!” The man who’d just switched my demo from the first part to the second pointed at the screen to show me where to go. He was all in black. His floppy manbun and (what I perceived as) guy liner made him almost look like he might have belonged in the game. He sat down next to me on my oversized playing chair, suddenly becoming, along with Paola and J.C., part of the entourage that would help me reach glory. 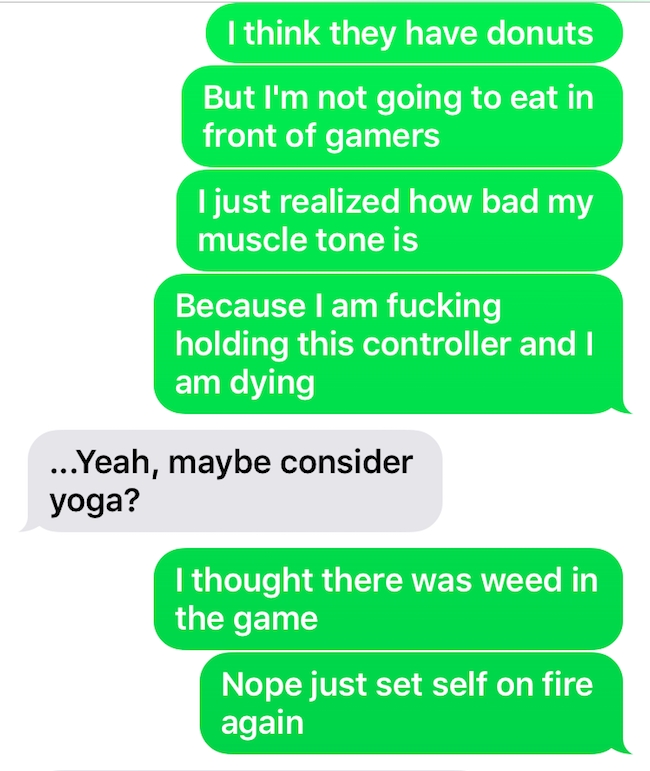 “My name is Gilles,” said the man-bunned dude in a thick french accent.

“Please play the rest of the game for me,” I responded as I passed him my controller, refusing to take it back until he and the wolf (who you really can’t kill!) were able to get to the next major checkpoint in the game–your first meeting with a rival tribe’s cruel and powerful female chief. Gilles, who kindly told me he was only “okay” because he’d had hours of practice, made the game look incredibly easy, with cool maneuvers and stealth takedowns that someone who really loves the game enough to utilize to its full potential will revel in once they figure out how to do. It takes some hand-eye coordination, but even those of us who aren’t blessed in this are can enjoy the story, the exploration, and the unspeakable joy that comes from finally being able to murder larger and larger animals until (I assume) you can take on one of those f*ckers that you had to run from at the beginning of the game.

Here’s a picture of Gilles beating the game for me: 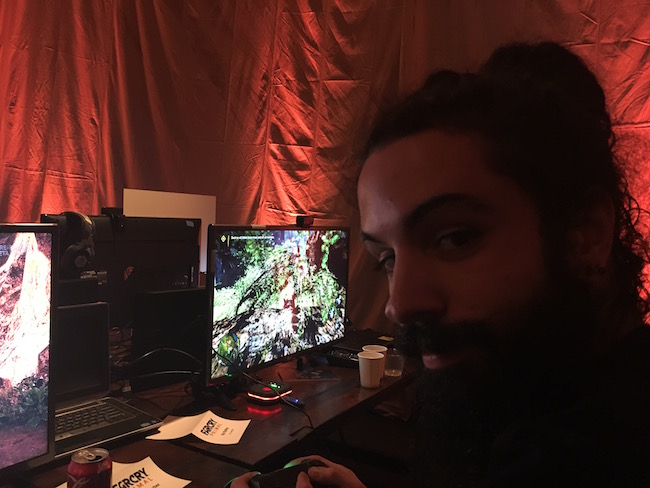 I didn’t roll into this hands-on expecting to enjoy the game or needing a team to help me finish playing it. But aside from the several moments I spent in a deep dark cave trying to get out without any light, it was a fantastic experience. If you’re into first-person adventures, have a soft spot for the Far Cry series, or have always dreaming of surviving the Stone Age, you should definitely pick Primal up when it hits stores on February 23.