Japanese electronics company Hitachi has developed a device for people to wear that will track their overall happiness with their employer. It looks similar to an ID badge, but it’s embedded with an acceleration sensor that monitors an employee’s motions during the day. Hitachi claims that there’s a correlation between people’s physical movements and their sense of happiness, and the data across an entire office full of employees wearing these badges can be collectively analyzed to measure workplace happiness on a scale of 0-100.

In other words, we’re all getting fired. I mean… right? It’s not just me who’s unhappy with their job. And we all sort of hate our co-workers.

Hate’s a strong word, of course, which is why I used it. If I had to wear something that collectively measured any kind of emotion I felt during work, it would melt. It would self-destruct within the hour. If my whole department were wearing these things we might set the building on fire. 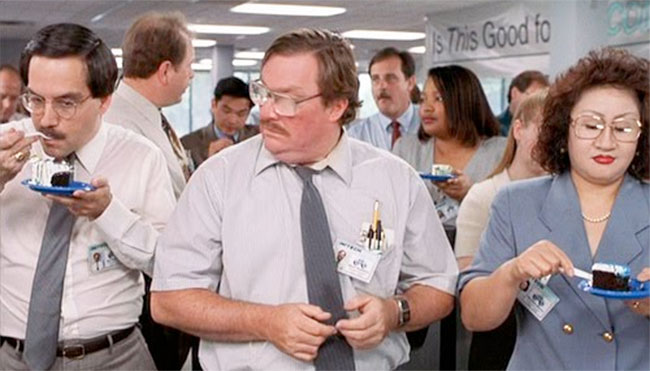 Hitachi plans to start offering the happiness meters in April. Their hope is that clients can improve efficiency in their business by boosting office morale. Constantly monitoring people to make sure they’re happy and not inches from beating the laser printer to death seems… not the answer to improving everyone’s overall mood.

Chief researcher Kazuo Yano says the concept for the device originated when they learned co-workers are more productive if they have better social relationships with one another. Let me just double check that this isn’t a press release from 1984, because “people work better together if they like each other” seems like kind of a no-duh statement coming from a country as technologically advanced and fastidious as Japan.

Nope, this is really technology from 2015. Hitachi emphasized that the monitors average a happiness quotient across many employees; it’s not for tracking each individual worker. I still say my department would accidentally burn the whole building down.

Data is gathered in real time, so companies can immediately begin the firings if they wish. The happiness meters are available as a subscription-based service for an annual fee of Y100,000 per card (I’m assuming that’s Japanese Yen, which would be $834.55 USD per card.)

Hitachi also says that it plans to use the technology on its own employees. If you work for Hitachi, it’s time to take up yoga, or something. Serenity now, pink slips never.