Raise your hand if you ever thought you’d see the day when Nate Diaz would be sitting as a guest in the chair next to Andy and Conan? If your hand is raised, you’re a liar! This is unprecedented and is not only a testament to Nate Diaz’s rising star, but how damn popular Conor McGregor is. Who knew that Nick’s little brother who teaches jiu jitsu to kids on Sunday morning would be getting the mainstream media treatment ahead of UFC 202 when he was just flippin’ the bird on TUF season 5?

Of course, most of the hype surrounding the Nate Diaz/Conor McGregor rematch stems from the — and I try to only use this word when it matters — epic trash talk that these two produce, and their appearance on Conan didn’t disappoint. Conor got in his sideways digs by apologizing to Conan that he couldn’t be there, and instead sent Nate in his place.

Then Conor made fun of Nate’s shirt.

Of course, Nate didn’t like it, and you could tell that things were starting to get awkward. Typically in this situation, Conan would make a self-deprecating joke to ease the tensions, but instead, he just kinda bit his knuckle and looked scared. 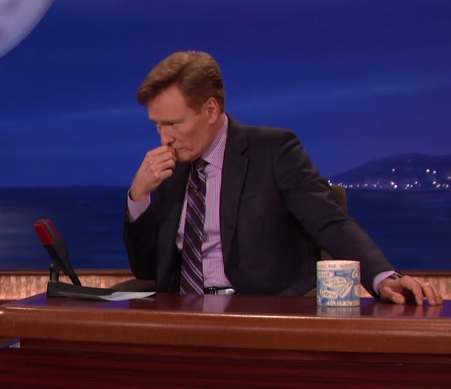 It was appropriate. Nate’s probably the baddest motherf*cker who has ever been on his show.