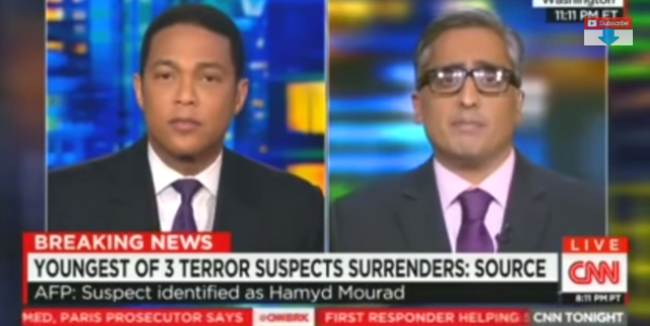 Don Lemon has had quite a year in terms of journalistic quality. There was the time he postulated that the missing Malaysian plane could have been swallowed by a black hole, the time he asked a rape victim why she didn’t simply bite her rapist’s penis, this bonkers and uncomfortable interview and so, so many other things. So many, in fact, that the Columbia Journalism Review named him one of the worst things about journalism in 2014. 2015 isn’t going so hot for him either, what with how he just last week asked Arsalan Iftikhar, a Muslim human rights lawyer, if he supports ISIS.

Now Iftikhar has fired back in an editorial in The Islamic Monthly.

Around the 4:45 mark of my now-viral CNN interview, Don Lemon was asking me about a Russian news agency poll which claims that 16% of French Muslims show sympathy for ISIS and then proceeded to ask me the question heard around the world:

“Do you support ISIS?”

Now to be completely honest with you, I totally thought that I had misheard him because surely there was no respectable journalist in the world who would ask a Muslim human rights lawyer whether he supports an organization which violates human rights each and every day.

But then I remembered that I was dealing with Don Lemon.

So I responded to Columbia Journalism Review’s 2014 “Worst Journalist of the Year” by saying:

“Wait…Did you just ask if I support ISIS?”

This was the extent of the response that I wanted to give to such a blatantly tone-deaf question which is the moral equivalent of asking a white person “Do you support the Ku Klux Klan?”

Anybody with common sense can see the logical absurdity of asking an American Muslim human rights lawyer whether he supports an organization which violates human rights every day.

Such an obviously absurd question certainly deserves no response.

Across the board, people have been outraged by Lemon’s question and have taken to Twitter to respond. For example:

But Iftikhar sees a silver lining in the whole thing.

After nearly 15 years of journalism and thousands of media interviews, I can honestly say that I have never become more “famous” than after this latest Don Lemon gaffe. It is a sincere honor to be added to the litany of famous “Malaysian-black-hole-penis-biting” Don Lemon media gaffes which can be added to his audition tape for his next job at FOX News Channel.

So from the bottom of my heart, I want to publicly thank Don Lemon for making me famous with his patently offensive racist dumb-ass question.