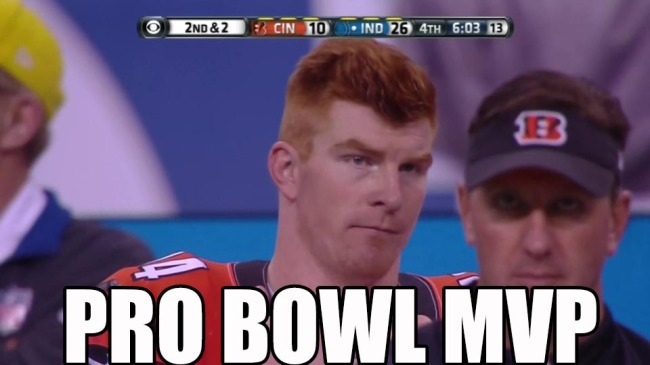 No kickoffs! Narrower uprights! Four two-minute warnings! Watch as the NFL experiments with some rule changes it isn’t quite ready to implement yet in real games and others it desperately hopes will make the Pro Bowl interesting.

It’s a good thing that Andy Dalton and Matt Ryan didn’t end up on the same roster. That’s too just much charisma for one team to handle. I’m sorry to say I won’t be watching live because I’m in Philly watching wrasslin’ and I mean that because I think the jokes will be good when Dalton gets into the game. Also when John Harbaugh still berates the refs in the Pro Bowl purely out of habit.

Knowing how crazy Jon Gruden gets in garbage time during the regular season, it should be fun to see what he does to fill time for an entire game that doesn’t matter. He might actually have a football inflating demonstration in the middle of a possession. I could totally see ESPN doing that and having the game action relegated to a small window in the corner.

As for who wins, I got Team Selected But Did Not Participate in a walk.