This review is part of a series in which the author watches all of the Ernest movies in order, even though some day he will die.

As the American public slowly backed away from the Ernest franchise while trying not to make any sudden movements, the producers must have panicked. An “urban rebrand” was just about the worst possible straw they could have grabbed, but grab it they did. If this was their best idea, it’s hard to imagine what the other options could have been. Maybe “Ernest Sits Quietly In A Room For 90 Minutes” or “Ernest Denies the Holocaust.”

For some reason, Ernest never caught on with black audiences. But, as of the 1995 release of this movie, it was no longer for lack of trying. Ernest is the only white member of a six-man janitorial company named Clean Sweep. On their free time, Clean Sweep are also an amateur basketball team, with dreams of making it to the big leagues.

While the team runs drills on a basketball hoop they wheel out of a sporting goods store after hours, Ernest accidentally knocks over and destroys an expensive piece of installation art. He takes the blame for it, and the rest of the guys are, for some reason, overwhelmed with gratitude. They are so indebted that they let Ernest talk them into letting him suit up to play at their next match in the city league. He is constantly underfoot and loses them the game despite being relegated to the sidelines.

In the locker room, Kareem Abdul-Jabbar appears to Ernest as “the Archangel of Basketball” and gives him a pair of magic shoes that chirp, move on their own volition, and give Ernest gravity-defying superpowers. After taming the shoes, which make him do zany walks, Ernest annihilates Clean Sweep’s competition by flying around the court and slam dunking at will. All is going great until a demon, who’s disguised as the manager of the sporting goods store, tempts him to turn his back on his friends and embrace a lifestyle of excess. All seems lost, as Ernest parties with hott slutts and wins every game without the help of his alienated teammates. Then he throws the shoes away and still manages to shoot the basket that wins them the local championship. The Good Guy team captain gets drafted into the NBA, the demon is thwarted, and Ernest merrily returns to sucking. 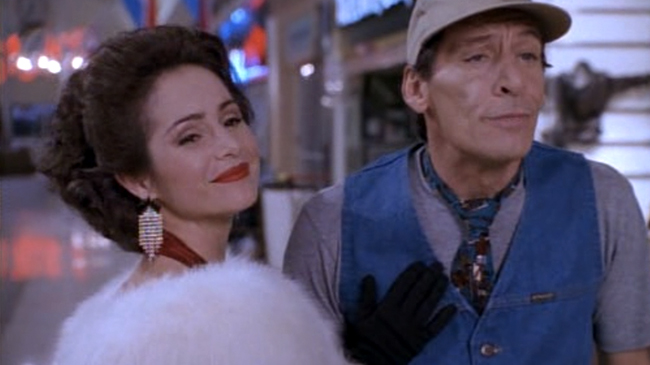 The message of every Ernest movie is that if you’re popular, talented, or women get this close to you, you’re probably an asshole.

Reviewing this movie is like trying to review a tablecloth. It’s just a big flat thing that occupies a certain amount of space. The previous movie, Ernest Goes To School, felt like an essay that was rushed the night before the due date. Slam Dunk feels like the same essay, just proof-read a couple times before it was turned in. It is at least watchable, if not pleasurable. It’s also the second attempt at making an entire Ernest movie without any jokes in it. Thankfully, they fall a bit short of School’s mark (an indelible one, of the Beast), and the hour and a half of raw tedium is alleviated by one or two good lines.

And let’s kick this hornet’s nest again – Slam Dunk isn’t racist, but it’s definitely a racial forehead-slapper. The whole thing feels like it was written by a youth pastor whose shtick is rhyming “Nazarene” with “rap so clean.” To its credit, it definitely could have been much worse, especially considering how little anyone in 1995 cared about not being embarrassing. The worst it gets is someone saying things like “That’s serious biz, homie” every five minutes. At least the guys never give Ernest parachute pants, teach him to walk cooler, or call anyone “daddy-o,” though they come close.

I don’t know if it’s appropriate to use the word “subtext” in a discussion of films where the protagonist falls off of a ladder at least three times in every installment. But if there is one that runs through all the Ernest movies, it’s “keep your head down.” Slam Dunk, like the other Ernest movies, skirts this vague line between encouraging kids to stay true to themselves and just basically telling them not to get any fancy ideas about bettering themselves.

Every movie ends with Ernest nobly resuming his post as the village idiot, presumably to be spared the pain of life as an incompetent manchild by the eternal goodwill of the villagers whose favor he won by killing the troll or saving Christmas or paving the way for the local basketball heroes to go pro. Which is heartwarming until you realize that in this particular case, he’s just going to get kicked back off the team within the week when he can’t slam dunk from 100 feet away anymore. In all the parallel Ernest universes, after the credits roll he’s still just mopping floors for minimum wage, continuing to not date his love interest, and fondly remembering that one time people thought he was cool.

Slam Dunk Ernest would later be gutted and refurbished as Like Mike, another tablecloth movie about magic basketball shoes. Check out either of them if you’re into dullness, or you’ve never seen anyone use a wire harness before.