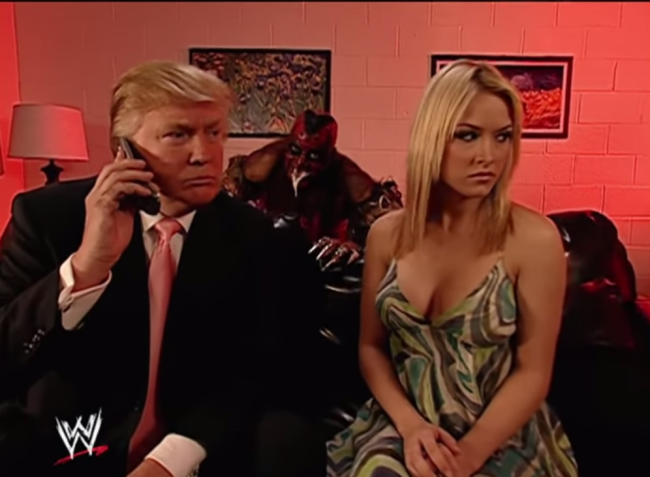 Politics and wrestling are both public spectacles full of bravado and sometimes embarrassingly absurd situations. Donald Trump himself is an absurd human being who has more money than all of us combined because life is unfair and awful. Lucky for us, absurd human beings are our bread and butter.

Trump has a long history of palling around with his weirdo billionaire friend in WWE. He’s even in the “celebrity wing” of the WWE Hall of Fame. Given that dredging up the past (fake or not) is Trump’s specialty, we decided to take a look back at some of the moments that are almost as ridiculous as the idea of Trump actually being president.

My favorite part of celebrity guests on Raw is when they treat wrestlers like garbage and no-sell gimmicks, or suggest that they could beat them in a kayfabe fight (please see almost any celebrity interaction with Heath Slater). I’m kidding, it’s awful. The Boogeyman is a dude with a mouth full of worms who scared the jeepers out of a plain old millionaire and his lady friend, but I guess those extra zeros on the end of your net-worth either make you impervious to fear or an insufferable asshole. Smart money is on me not saying which so we don’t get hella sued.

Donald Trump and Rosie O’Donnell squared off in the media after O’Donnell criticized Trump for forgiving a Miss USA contestant, and letting her keep her crown, after causing a media uproar by partying and drinking while underage. This spiraled out of control, causing the two to appear on any show that would have them to call each other names, accuse them of infidelity, and basically go round and round in a circle jerk of public idiocy. Their feud was so ridiculous, it included a “peace offering” from KFC: The two could meet at any KFC restaurant of their choice and hash it out over a shared 10-piece bucket of chicken. If that all sounds totally reasonable to you, please revisit this grainy video of two wrestlers dressed as Trump and Rosie wrestling on Raw, wherein “Trump” defeats “Rosie” with a Flying Hairbutt. Thank goodness this was fake, as I’m pretty sure Trump’s actual hair is hard enough to be considered a deadly weapon.

During an episode of Raw dubbed “Vince McMahon Appreciation Night,” Trump decided to steal Vince’s thunder by dropping thousands of dollars onto the fans, thereby buying their affection like I wish my dad would have after my parents’ divorce. If the idea of watching two ungodly rich old white men playfight is your jam, that’s kinda weird, but you do you, I guess. Anyway, I’ll let you take this and make your own joke about Trump indiscriminately giving away money to strangers versus his actual feelings on public assistance. I guess in this case, the “pretty small hoop” people had to jump through to earn it was sitting through a segment that’s mostly Donald Trump talking.

Vince McMahon may be old, but that guy is super jacked. He still says phrases like “making gains” as he approaches 70, whereas the most vigorous workout Trump probably got was making a squinty, smug duckface and angry pointing motion with his hand. You can’t really blame him for electing to have a big scary dude fight another big scary dude on his behalf. Though, really, two corporate cronies sitting around choosing which non-white people would do their dirty work for them probably should have been the thing that tipped us off to Trump’s true position on outsourcing.

On June 15, 2009, Vince McMahon announced that he had been very generously compensated in exchange for ownership of Monday Night Raw. Well, he ended up regretting that decision, not because of his love of the show, or because he’d hate to see his life’s work in the hands of someone else. No, it’s because he didn’t want someone to be nice to fans and give them what they wanted. That’s… okay, when you say it like that. Even the most casual WWE viewer wouldn’t be able to separate fact from fiction. Vince would go on to “buy back” the show, after letting Donald Trump wander around the ring looking smug while being excessively praised for how smart he was. Yes, it will make you feel as grimy all over as it sounds like:

This raises a lot of questions, though. Why would a wrestling show dedicate so much time to rich boy ego fights, and the aggressively masturbatory lionization of someone who has no bearing on the future of your wrestling show? Why doesn’t Vince McMahon have cooler friends? What unholy union of self-tanner and bad life decisions made Donald Trump that color? Regardless, if you ever doubt the abilities of WWE’s creative team, remember that they once managed to make a belligerent, smarmy billionaire who says things like “I’ve got a lot of friends, a lot of millionaire friends” like it’s no big deal into the good guy. That’s demonstrable talent right there.

Now, it’s pretty easy to be like, “Hey, aforementioned joke wrestling website. Maybe you shouldn’t get super political.” And you’re right. I mean, I’m Canadian, and your weird and terrifying political landscape has little bearing on my day to day life in the first place. That said, please enjoy a completely objective vine of Donald Trump getting a Stone Cold Stunner over and over: