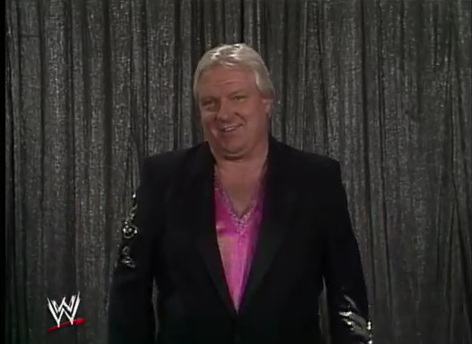 So the good folks at Squared Circle Reddit (where all the cool kids hang) uncovered a story from the Chicago Tribune in 1975 about how Bobby Heenan made the crowd so mad that a man fired five shots into the ring trying to kill him. Heenan was being a scoundrel as usual, and his antics riled the crowd up so much that one fan decided to take things into his own hands. User Cukuimane tracked down the actual article and did some transcribing.

Bobby Heenan: “It was simple finish. Nick (Bockwinkel) slammed Verne and the ref counted, ‘One! Two!’ and Verne put his foot over the rope. I took his foot and threw it off the rope and the ref counted three. Verne jumps up and tells the ref his foot was on the rope and the ref says to continue the match. Meanwhile I’m on the apron hugging Nick. Verne dropkicks Nick in the back, Nick knocks me off the apron, falls to the mat, and Verne pins him. As I got up off the floor, a fan in the crowd says ‘Don’t worry, I’ll get him down.’ And he took a gun out, lifted his hand on the kid’s shoulder who was sitting in front of him and fired down to the ring.”

Verne Gagne: “The next thing I hear is a noise going Pow! Pow!”

Nick Bockwinkel: “After the finish, Verne was up, gone and out of the ring. I thought that was strange because usually he’s sucking up all the glory that he can after the match by getting his hand raised. Bobby jumps up on the apron and is looking around back and forth and motions for me to come over to him. When I do he tells me, ‘Let’s get the f*ck out of here! Those were gunshots!’”

Verne Gagne: “He shot down to the ring several times and missed us.”
Bobby Heenan: “He shot a woman in the arm, another one in the chest, two in the neck and one in the thumb. The shots never made it to the ring, it hit the ringside seats before that.”

Nick Bockwinkel: “I looked right past Bobby, and they were crawling over chairs to pick up a woman. I could see a bullet hole in her shoulder, and I can see another woman who got shot in the arm and is bleeding something fierce and they were starting to carry her out as well. So Bobby and I got out of the ring and there were some cops there that escorted us up these narrow aisles and to the dressing room.”

But here’s the craziest part: The guy was never arrested and he kept coming back to wrestling shows. Chicago really took that “no snitching” thing to heart back then. There’s a Bullet Club joke here somewhere probably, too.

Verne Gagne: “When I got back to the dressing room, the guys were telling me, ‘Did you hear those shots out there?!’”

Bobby Heenan: “The article in the paper about the incident showed the kid saying that all he saw was orange. He had suffered some hearing loss as a result of the incident. The guy who did it actually would continue coming back to wrestling cards held there, and nobody would say that they saw him do it. He even had police around him to make sure that he never did anything again.”

Here’s a video of Heenan describing the incident. It starts at about 5 minutes.

Well kids, see, the ’70s were a time when Kayfabe was a thing and there wasn’t that funny Twitter stuff and documentaries to tell us that wrestling was fake. It was real. Real, dammit. If you’re not willing to get shot in the face over wrestling then you’re not trying hard enough.