A little over a month ago, Michael Bisping didn’t have a title shot to speak of, and Brock Lesnar was a retired MMA fighter. Now, at UFC 200, Michael Bisping is the middleweight champ and Brock Lesnar is back in the UFC, facing one of the scariest strikers in MMA history in Mark Hunt. So how did the fight go? Short answer: it was a Brock fight, and he pounded Mark Hunt on the ground for the majority of the fight, but certainly didn’t look like the monster he was in his prime. Still — impressive.

Both men respected each other early, with Brock even throwing some leg kicks, but it was only a matter of time until Brock worked the takedowns, and he did just that. He looked powerful as he swarmed over Hunt with some brutal ground and pound in the first round, but Brock slowed down into the second. Hunt started finding his timing in that round, but couldn’t hit Brock with anything. Brock’s chin held up. Then the fight became essentially a less eventful Anderson/Cormier fight. 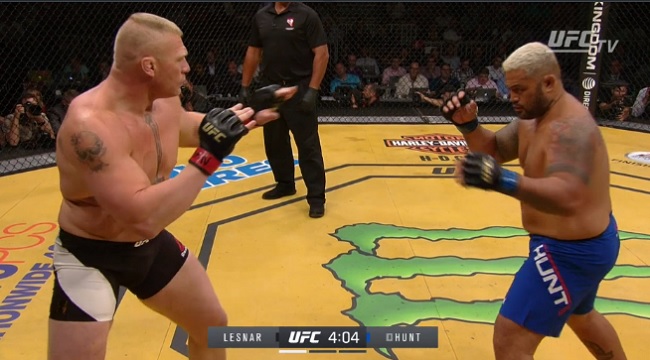 Round 3 was more of the same, with Brock throwing his ham-handed fists at the head of Hunt as he laid draped over the Super Samoan. It was impressive after a five-year layoff, but wasn’t impressive in terms of his legacy. Still, how can you deny this Brock? He probably beats up most of the division still.

So what now? If this is Brock’s one-off fight, it wasn’t as destructive as people hoped. He certainly beat up Hunt, but where does Brock go from here? According to Brock, he doesn’t know. He told Joe Rogan he wanted to take it one day at a time, then called for peace in America in these tough times.

“From one white boy to all nationalities, we gotta stand together.”

"It took me a little while to acclimated. Words can't describe it. Thank you everybody. Thank you so much." – Lesnar #UFC200

The one thing we do know: the next time we see Brock Lesnar compete, it will be for a different promotion. As we were reminded several times before he went into the octagon tonight, he will take on Randy Orton at SummerSlam.