Earlier we recapped Triple H’s appearance on Steve Austin’s podcast. While it was mostly uneventful, he was asked an interesting question about former WWE Superstar Chyna, and her possible inclusion into the WWE Hall of Fame:

“Does she deserve to go in the Hall of Fame? Absolutely… There’s no beef on this side with anything, and I mean that 100 percent. From a career standpoint, should she be in the Hall of Fame? Absolutely.” However, Triple H goes on to very loosely imply that he doesn’t want a scenario where children are looking up New Hall of Famer Chyna online and end up finding her explicit material. It’s pretty entertaining to watch Triple H figure out on the fly how to say “She did porn” in the most diplomatic possible way. “I’m not criticizing anybody, I’m not criticizing lifestyle choices… It’s not a morality thing or anything else. It’s just the fact of what it is. It’s a difficult choice.” – With Spandex Podcast Recap

In that vein of diplomacy, Chyna’s response was actually pretty gracious:

I understand that the question was asked why am I not in the HOF? I have my reason as to why however, let me make this clear. If the WWE was ever to say that I was going to be inducted, either as part of the groundbreaking DX or as an individual. Well, my answer would be what a friend of mine us to say in the ring, O HELL YEAH! It just want to take a minute and thank all of the fans that keep my name out there. You have no idea what it means to me. I love you all. – Twitter 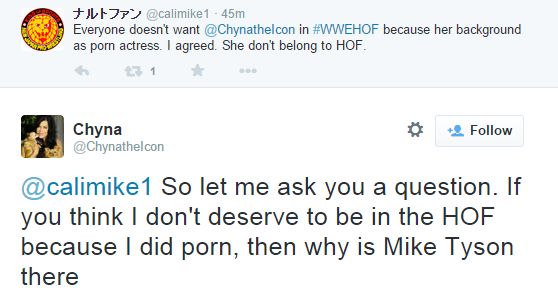 While we can all agree that the WWE Hall of Fame is primarily a sham driven by more than a little favouritism, people still cling to the accolade as a benchmark in the wrestling business. The idea that it’s some kind of prestigious, untouchable institution of pure moral fibre has been overridden multiple times, and that’s just Sunny. You can bandy about the rumours of Jimmy Snuka killing his girlfriend, but you can also very easily google Mike Tysons actual rape conviction. How about Stone Cold and domestic violence? No? Those things are cool? Ah, good.

The worst thing, really, is the backlash that say oh, these people paid their dues, they’ve rehabilitated themselves, everything is fine now. It’s placing physical and sexual assault above safe, consensual sex, and shaming the latter. Is a woman’s own sexual agency that damning? I mean, if we’re going to be embarrassed by anything, maybe it should be participation in the episode of The Surreal Life where Vern Troyer got drunk and peed in the living room, because that show was literally made of second-hand embarrassment.

While no one can deny the accomplishments of Chyna in WWE, at some point you’ve gotta own up to the fact that none of us sitting at home speculating know for sure the reasons a Hall of Fame induction will never happen. But we can’t ignore the greater conversation about the inequity of the treatment of women by WWE, and the incongruous logic of hiring and building women into sexual objects and then shaming them for taking control of the image they’re taught is the correct one. We’ve already tried to have this conversation once in the past week, and it needs to continue. Lest we forget, the first foray into pornography was negotiated on her behalf by WWE themselves:

While WWE is attempting to make strides with the women of NXT and their #LikeAGirl campaign, they’ve got a long road to go. But until then, I guess it’s cold comfort that no one who’s had sex on camera with a problematic past will ever appear be welcomed onto WWE TV.