WWE Needs To Remove Donald Trump From Its Hall Of Fame 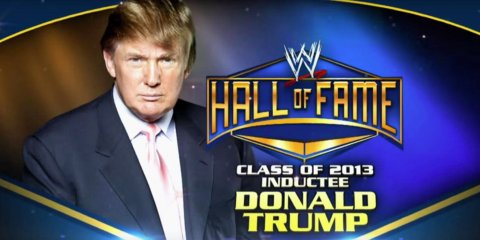 Donald Trump is a racist. He’s an Islamophobe. He’s a bigot. We’ve already established these things. In case you had any doubts, Trump doubled down and erased the “Trump is a bad person” discussion from debate to foregone conclusion when he went full Hitler and said that he wanted Muslims banned from entering the country. At this point, supporting Trump is thinly veiled code for “yeah, I think some pretty racist things from time to time.” So, I wonder, why has WWE been silent on a member of their Hall of Fame being a documented bigot?

WWE and Donald Trump have more than a 25-year history of working together. WrestleManias IV and V were both held in Trump Plaza as the venue, and Trump himself became known as an early WWE supporter. Trump’s involvement with the early WrestleManias helped maintain legitimacy after its mega-successful third installment. Trump would continue to support WWE, famously participating in the “Battle of the Billionaires” with Vince McMahon at WrestleMania 23. The event drew more than 80,000 fans, more than $5 million at the gate and a buy-rate that wouldn’t be broken for five years. With the current state of the WWE Network and the end of pay-per-views, that event will most likely stay as the second-highest grossing WrestleMania of all-time.

Trump would go on to “own” WWE Raw, fake booking matches and even having “money” come from the rafters for fans. Trump and Vince McMahon used whole segments of Raw to promote the presidential hopeful’s feud with Rosie O’Donnell for some reason. It’s clear that Trump has had a deep, long-standing connection to WWE. So, the idea of him being inducted into the Hall of Fame initially was a no-brainer. But not as much of a no-brainer as the fact Trump needs to be removed.

Hulk Hogan was removed from WWE records and the Hall of Fame for a taped conversation in which he dropped the n-word a few times and made some really offensive, racist comments. Trump’s comments are as bad, and he’s doubled down in public, promoting violence and xenophobia on a grand scale. Even if Hogan hadn’t been kicked out of the WWE Hall of Fame, Trump’s comments are bad enough for a precedent to be set for guys to get removed.

I’ve gone on enough about WWE’s history of racism, and it seems like they’re really starting to turn the corner to a more modern portrayal of people of color (I know, I’m jinxing it). However, it’s possible that the League of Nations is just Vince’s attempt to play on mainstream news and fear of International residents. So, the new angle may even be an endorsement, or at least an acknowledgement, of some of Trump’s xenophobic beliefs. Though, admittedly, it’s hard to tell because, in wrestling, “international” automatically means “villain” anyway. Still, as the company is seemingly moving towards more progressive representations of subjugated people, it’s integral that they make a full move to let us know that they want no part of the venom Trump is spewing.

I would say to boycott Raw or something until Trump gets removed, but telling from the ratings, there appears to be a boycott happening already that I didn’t know about. Even so, the continued endorsement of Trump is a bad look for a company that’s seemingly trying to embrace more than just “white guy” every Monday. So, Vince, Hunter, whoever: Get Trump out of the Hall of Fame. Anything else is supporting hate. Isn’t that something you want to rise above?