The Wrestling Episode is our cleverly-named new feature wherein we watch non-wrestling shows with wrestling episodes and try to figure out what the hell’s going on in them. You’d be surprised how many there are. You can watch the episode on Netflix here. If you have any suggestions on shows that need to be featured in The Wrestling Episode, let us know in our comments section below.

I’ve Never Heard Of Fuller House. What Is It?

In 1987, the sentient TGIF birthing matrix created the show Full House, about a widower trying to raise three daughters in San Francisco with the help of his handsome, Elvis-obsessed exterminator brother-in-law Jesse and their extremely unfunny friend Joey. The show was so dorky and on-its-sleeve sappy that it found a following, particularly among kids who’d been raised on TV sitcoms, but were too young to have actually seen anything good. It ran for an astonishing eight seasons, was possibly the last pure cheeseball sitcom of its era before the sarcasm of the ’90s set in, and launched the Cerberus that is the Mary Kate and Ashley Olsen line of “popular ladies existing.”

So, There’s A Wrestling Episode?

Why yes, yes there is.

Full House didn’t get around to shoehorning pro wrestling into an episode until very late in its run … the two-part series finale, even. The episodes mostly revolve around youngest daughter Michelle falling off a horse and getting amnesia — not a joke — but there’s a subplot about Jesse and Joey trying to sell a Travel Channel-style show and ending up in a tag team match. 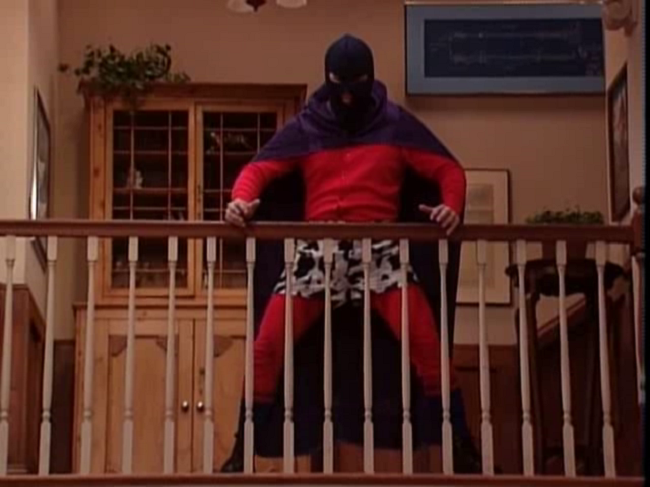 Here’s what we wrote about the episode in 2012:

While Michelle is off bashing her head into tree trunks and forgetting the time she really wanted to be Yankee Doodle, “Rush Hour Renegades” Jesse and Joey are pitching a television show. The show’s premise: wacky radio DJs go to unusual places to interview unusual people about their unusual jobs. Note: This is where TLC, Bravo, The Travel Channel and Food Network got the idea for every show on television. Their first episode: “We’re gonna tag team wrestle Sven and Ingamar, the Swedish Spleen Stompers.”

We don’t get to see The Swedish Spleen Stompers (because of Michelle’s brain damage), but we do get to see Joey take a Dude Love bump from the balcony in the Tanners’ living room and slap a Tokyo Dome-quality ankle lock on Big Jess. I don’t know if the Rush Hour Renegades would’ve beaten the Swedes, but with his mic skills, shitty impressions and 8+ years in situation comedy Joey Gladstone would’ve been huge on Raw.

Did somebody say … wood?

So, Did Fuller House Throw Someone Off A Horse Already?

Not exactly, but it’s fun to pretend Michelle doesn’t appear on the show because she actually never recovered, and is now a drifter. They just say she’s in New York running a “fashion empire” because they can’t admit that they abandoned their broken daughter.

Anyway, Fuller House gets to the pro wrestling a lot faster. Episode six is called, ‘The Legend of El Explosivo,’ and follows materfamilias DJ Fuller — again, get it — as she stumbles upon her kid doing some unauthorized backyard wrestling, running in on a live wrestling show and ending up with a contract offer. But we’ll get to that.

1. a baby that is way too aware that it’s being filmed for a TV show
2. a preppie middle child who looks and acts like a 5-year-old Ted Cruz and can’t stop screaming
3. a pre-teen who was not able to land a role on Dog with a Blog

DJ is overprotective (because the Tanner family is full of people just dying out of nowhere, I mean, can you blame her?) and stumbles upon her oldest son Jackson engaging in the safest-ever recreation of Mick Foley jumping off a house. Seriously, they’re doing it onto multiple fresh mattresses — none of that “springs sticking through the padding and threatening to stab you to death if you fall wrong” stuff we f*cked with as kids — and the boy taking the splash is wearing so much padding they literally attack him with whiffle ball bats to test it out and he’s fine.

So, They Just Go To A Lucha Show? That’s Cool.

I’m … honestly not sure. The show they go to involves the following:

– a costume contest to see who can look the most like “King Jaguarito,” a leopard-print mini described as the “greatest luchador in the history of luchadors.” As far as we can tell, his gimmick is that he’s half jaguar half caveman and throws a sh*tty high crossbody. That could very easily be an actual lucha libre legend. The costume contest is won by Max, the aforementioned screaming Young Republican, because he bought an official King Jaguarito costume earlier in the day. So … the costume contest is a work for whoever buys the official merch? Again, totally sounds like a wrestling show.

– an appearance by a middle school dance troupe (?) which is mostly an excuse to tie in the episode’s B-story, about an out-of-touch mother who has to be the center of attention at all times even though they live in a house with a professional dancer who is just trying to help. We get the costume contest and a dance routine from 12-year olds (and one 40-year old) before we’ve had a single match.

First, though, one of my favorite things about any wrestling event on a sitcom is the crowd. Sitcom people have no idea what wrestling crowds look like. Instead of 150 uncomfortable dudes in t-shirts, the Fuller House crowd is beautiful women, people wearing famous non-Lucha Kaboom masks (like Mascarita Sagrada, among others) and folks holding wrestler piñatas. Also, there’s always someone in the crowd in a chicken costume. Producers think any funny live event means there are fans showing up in full gorilla or chicken costumes. No idea.

Maybe that chicken is there in support of our first tag team, however: LOS POLLOS LOCOS. They get cheered, but turn heel when they cheapshot their opponents, a skeleton duo known as “Los Calaveras,” aka The Skulls. I’m hoping one of them is Joshua Jackson. DJ doesn’t understand why they’d cheer the chickens and then boo them, prompting Stephanie to explain pro wrestling in a way that not only warms my heart, but comes dangerously close to sounding like one of my Lucha Underground columns:

Which One Of Them Ends Up Wrestling, Because Obviously That’s Going To Happen

Thank you for knowing how sitcom wrestling episodes work!

Jackson wants to be at the show, so he teams up with his deadbeat best friend and a dog to trick his mother’s tracking app and sneak off in disguise. DJ once did this trying to meet a pop star at the mall, minus the app, so like mother like son, I guess.

Max wins the costume contest and gives King Jaguarito his “pimped out” Jaguarito club. Jaguarito does a run-in during the tag to save Los Calaveras, Jackson shows up late and sees Jaguarito with Max’s custom club and (for whatever reason) assumes he’s watching adult pro wrestlers beat up a child. HE then does a run-in, because there is absolutely no security at Lucha Kaboom and none of the wrestlers know what they’re doing, and it’s all downhill from here.

Jackson gets unmasked, which trigger’s his mother’s “mama bear” instincts. So DJ then does a run-in, despite having never watched wrestling and not knowing how it works, and she and her adolescent son BEAT UP THE PRO WRESTLING TEAM AND WIN A MATCH. I’m talking full-on pro wrestling beats them up. She pulls off what looks like a La Mistica into an armdrag, pioneers the first-ever “double El Explosivo” — a splash off the ropes, which isn’t the first-ever anything but we’re in way over our heads — and wins the match with a tandem La Magistral cradle.

Now, you’ve read this entire recap of the episode, right? At what point where you like, “yeah, DJ Tanner is gonna get in the ring and pin a chicken tag team with one of Ultimo Dragon’s signature moves?”

The payoff (which should probably be child endangerment, jail-time and lawsuits in every direction) is Lucha Kaboom offering DJ a one-year contract to compete for them. She turns it down because she has real-life responsibilities, but what an amazing f*cking hard left it would be if Full House came back to tell the story of a single mom trying to make it in the lucha libre business.

So, what have we learned?

Sure. What Have We Learned?

1. A wrestling promotion will attack children and let stranger moms beat up their wrestlers if it gets a crowd hype.
2. Moms ruin everything.
3. Stephanie Tanner is my future best friend.
4. Fuller House is pretty messed up.