From Humanoids To Ham-And-Eggers: Why Bobby ‘The Brain’ Heenan Is An American Icon

Bobby “The Brain” Heenan was one of the biggest wrestling villains of the ’80s and the greatest color commentator of all-time. He’s Paul Heyman and Johnny Carson all rolled into one incredible entertainer. If you aren’t familiar, here are nine reasons why he’s one of the greats.

1. He was the driving force behind the biggest match in wrestling history: Hulk Hogan vs. Andre the Giant was obviously a huge dream match. However, Andre wasn’t the villain selling the match. That job went to Heenan. He really made Andre a villain when so many people spent so many years loving him. You could even argue that fans wanted Heenan to get embarrassed as much as they wanted to see Andre lose. He was basically Paul Heyman 1.0 in the ’80s.

2. He was one half of possibly the best announce team of all-time: The best Royal Rumble ever was in 1992. The roster was amazing, and Ric Flair performed for more than 60 minutes before winning. But what really took the match to the next level was Heenan and Gorilla Monsoon. They traded barbs for more than an hour and made sure there wasn’t a dull moment in the match. They even had an in-studio show that’s one of the best things on the Network. Heenan coined “humanoid” and had classic calls that are still hilarious. My favorite was when someone would grab IRS’ tie, and he’d scream “HE HAS HIM BY THE TONGUE!”

3. He had his own late night show: Bobby Heenan could have been Johnny Carson… he was just that entertaining. If The Brain hadn’t been a wrestling personality, he’d have been one of entertainment’s biggest stars. He was just that great. I don’t even know what’s going on in this clip, but I’m watching it all the way through. WWE Network needs this whole show right now.

4. He was, by all accounts, a pretty good wrestler: Everyone from Ric Flair to Bret Hart has agreed that Bobby Heenan was an underrated and spectacular worker. He bumped like a lunatic and knew how to get the crowd eating out of his hand. He was also so hated that he toured around with a gimmick of having people pay to see him get put in a weasel costume. For like an entire decade. The weasel suit matches were just a few minutes at a time but Heenan would bump like a chunkier Flair.

5. He ethered the Harts worse than anyone ever: So, you know how Jerry Lawler had that feud with Bret Hart, and he insulted the Harts with all sorts of jokes that were never funny? Actually, Lawler, in every aspect of his career, was basically Trash Heenan. He did literally everything worse. If you want real, actual funny digs at the Harts, look no further than Bobby destroying them on TV every chance he got. You’re laughing, but you still want to see him get put in a Sharpshooter by the end.

6. His epic appearance on The Arsenio Hall Show: About Heenan possibly being a mainstream entertainment star… look at this. He’s wisecracking circles around Arsenio. And I know this isn’t really something he’s responsible for, but look at this goddamn picture: 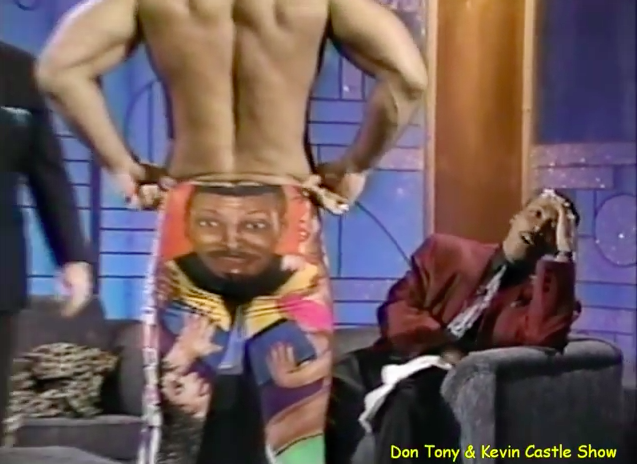 7. He dropped a rage-filled f-bomb on live TV: It’s no secret that Bobby Heenan wasn’t exactly happy at WCW and was ready to blow a gasket at any moment. And that’s exactly what happened when Brian Pillman hopped on Heenan’s hurt neck and almost re-injured it. Heenan responded by yelling “What the f*ck are you doing?” live on TBS. This, of course, worked wonders for Pillman, whose character thrived on unscripted moments. So, pissing Heenan off was great and legendary.

8. “Ruining” Hulk Hogan’s big moment: Hulk Hogan turning on WCW and joining the NWO was the biggest surprise in wrestling history. However, Bobby Heenan caught a ton of slack for asking “Which side is he on?” as Hogan went to the ring for the big moment. Some have argued that Heenan spoiled the turn and went to business for himself. Most importantly, it made Hogan blow a gasket when he heard what Heenan did.

I, for one, am glad this pissed Hogan off. I always thought Heenan got a bad wrap for the incident. He’d always predicted Hogan doing the worst and expected babyfaces to do something evil. Just look at when Macho Man and Hogan joined forces in WCW. Heenan actually yelled “He’s going to hit him when he turns his back!” That didn’t happen, but Heenan always predicted some sort of heel move, so him saying Hogan would turn on WCW didn’t actually give it away. It just made people angry. And that makes me happy.

9. He gave the best Hall of Fame speech of all-time: In one of those sad twists of fate that makes you sort of question everything, Bobby Heenan was stricken with throat cancer. His voice — the thing that has given us so much joy — has been all but taken away from him. That didn’t stop him from delivering one of the most entertaining WWE Hall of Fame speeches ever. He fought through his voice limitations and showed why we love him so much. It was the perfect cap to the greatest announcer/manager wrestling has ever seen.