NXT Could Be Adding Another Team To Their Australian Invasion 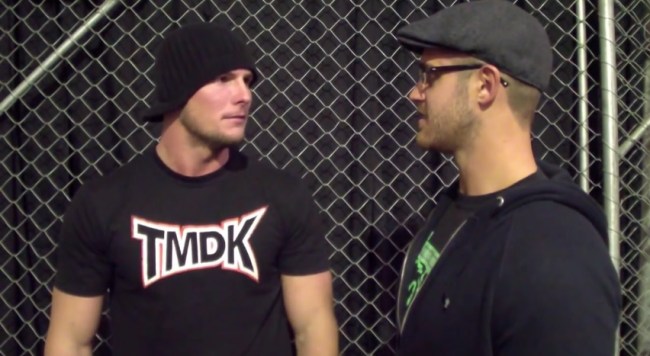 Men With Hats At Work

A few months ago, when WWE announced their newest class of recruits at the Performance Center, a lot of us noticed that Australia was pretty well represented by KC Cassidy and Jessie McKay. The two of them have since made their way to NXT, and along with Emma, that makes three Australian women on the roster. There’s also Murphy, one half of your totally heterosexual NXT Tag Team Champions, which makes four Aussies at Full Sail. And in the months to come, it looks like WWE will be adding another pair.

Chatter from places like the Wrestling Observer all but confirms that Shane Haste and Mikey Nicholls, collectively known as The Mighty Don’t Kneel, will be offered WWE contracts. This isn’t the first time I’ve mentioned them here. As representatives of Pro Wrestling Noah in Japan, they put on a very strong showing at NJPW Wrestle Kingdom 9 in front of a packed Tokyo Dome and a worldwide pay-per-view audience. It appears that Wrestle Kingdom was exactly the boost they needed because, while they’ve been a great tag team for a while now, they only got their chance to impress WWE scouts recently. Reports state that they were standouts at a Performance Center camp earlier this month, and contracts will be on their way once their visas and medical tests are all worked out. And even once all of that is squared away, Haste needs to complete rehabilitation for a knee injury, so it’ll be a while before we see so much as a debut vignette.

But just think about that… six Australians on the NXT roster. That has to be a stable waiting to happen, right? I hope they’re called “There Is No Rule Six.” In any case, shout-out to Down Under for their pro wrestling renaissance as of late, and don’t hesitate to send more people! I’m going to include With Spandex favorite Evie in that request, even though Bret and Jemaine have taught me a valuable lesson about not lumping Australia and New Zealand together.