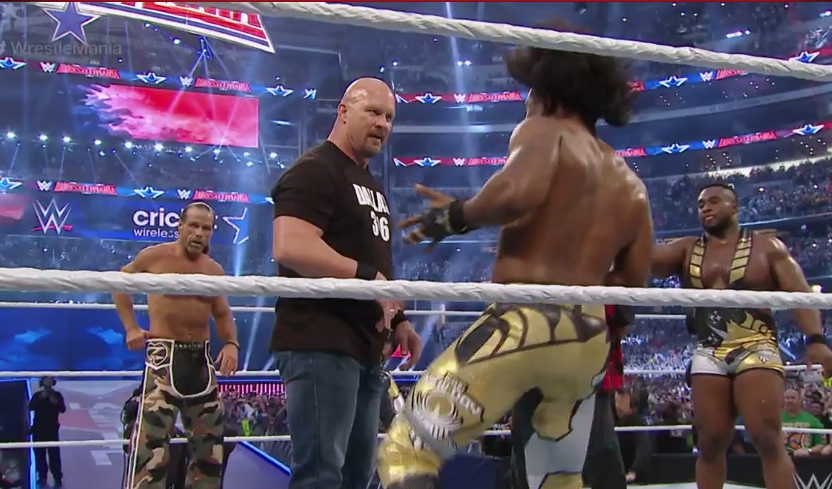 One of the best moments from WrestleMania came when Stone Cold Steve Austin, Shawn Michaels and Mick Foley went to the ring to take out the League of Nations and Xavier Woods. While most of the attention focused on how in-shape HBK looked coming to the ring, nobody quite knew just how incredible Austin’s brief appearance was. Stone Cold had Enzo and Cass on the podcast this week (must listen!) and revealed that he had a torn rotator cuff right before his appearance.

“After I’d already committed to Vince to be there, I tore my rotator cuff on my right shoulder. I tore the hell out of it. It hurt like a b*tch…I can barely drink beer. This is my beer drinking arm! That’s what I was most upset about.

[After the match] we had to start throwing punches. I threw that first punch at Rusev…and I hit him in the mouth or the nose, and he’s in the corner and he’s bleeding and I feel so bad for him because I really like Rusev…When I threw that first punch, I ripped everything in my shoulder. And I’m like, ‘Jesus Christ, you can’t stop throwing now.’…so we call for the beer and my shoulder is about to fall off!”

On one end, the injury plague has left even the legends affected, but on the other end, it just further proves that Stone Cold Steve Austin is the toughest SOB in WWE.

Another tidbit that was cool was Enzo revealing how Rusev was able to take that crazy Stunner. Apparently the people at NXT have “Stunner parties” where people take Stunners and do crazy bumps for fun. So Rusev was doing it as a sort of homage to those days to pop the NXT guys and also look like a million bucks.