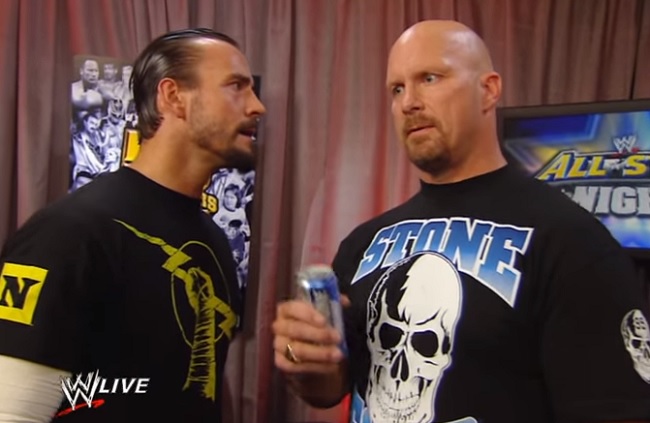 One of the greatest missed opportunities in modern WWE history is the time Stone Cold Steve Austin interacted with CM Punk on a 2011 episode of Raw. One was a legend, one of the biggest and most profitable stars ever. The other was a few weeks away from dropping a pipe bomb and becoming the most talked-about name in the company. One loves to drink beer. The other’s Straight Edge. It was destined to be, and then … nothing.

On a recent episode of The Ross Report, Stone Cold talked to JR about that missed opportunity, and how great it would’ve been to have wrestled Punk before he became a highly-rated UFC star. Here’s what he had to say:

“I think me and CM Punk would have sold a lot of tickets together. And again, he gets it, I get it. It would be one entertaining program … He’s smart. His psychology is great. He’s easy in the ring, meaning his physicality, everything looks good, nothing hurts. Again, I would think me and him would be right on the same page psychologically and we’d be able to weave a hell of a tale. And also, depending on how you played this, whether he’s heel and I’m baby, he’s baby and I’m heel or it’s just two guys out there, you see both guys whether it’s him on the dark side, he’s got a tremendous mean streak, as does Stone Cold. On the fire side, he had tremendous fire, as did Stone Cold, so both guys are bringing everything to the table that you need. And also great storytellers and talkers, so all of the elements would be there.”

Austin also talked about what it was like to retire earlier than expected, and how he “left a lot on the table.”

“I never thought about moving on and I look back and think if 2003 was my last match, I guess I retired about 38. Man, you talk about leaving a lot on the table or leaving a lot in the ring, I, probably, Jim, would have liked to at least get to 42 and maybe 45. But I never really had an exit strategy, but that being said, had I remained completely healthy, had I maybe lived a little bit slower, and that wasn’t really an issue, but just the fact my neck was the bottom line, that happened, so I got out when I did. But it would have been nice to last until about 42 and then went from there.”

Austin’s 51 now, but he sounds more like a guy who’d like to step into the ring one last time than he has in the past. Plus, 51 is still five years younger than Sting, who competed at WrestleMania and main-evented Night of Champions. That didn’t end well for him, but you get what I’m saying. Sadly if we ever do get another Austin match, it won’t be against his perfect, “Reality Era” compliment. Looks like all we’ll have is that one scene with Silent Rage, and the pipe bomb t-shirt.