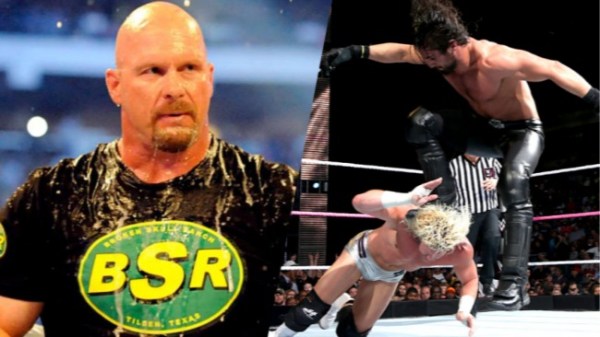 There’s a veritable swath of issues with WWE‘s product right now (eschewing cynicism for one moment, there’s a lot of good in the shows they produce as well), but to pick one singular thing that is hurting the ratings for RAW would be a hard task. On a recent episode of The Steve Austin Show, with special guest Vince Russo, the former multi-time World Champion offered his take on why WWE is lacking the kind of quality that’s begging viewers to tune in every week.

Everything’s so slick now. I would just present it as more of a competitive endeavor. Make it seem like a shoot. I mean, we know the [professional wrestling] business is a work, but present it as a shoot. I mean, have Seth Rollins Curb Stomp somebody. Fine him $15,000. Hey, maybe the money’s not going to change hands, but it’s the fact that you have a set of rules, guidelines, presentation. You can have all the high production values that you want. Yeah, that’s great, but just present it in a competitive atmosphere, so that your storylines reflect that reality.

That idea of reintroducing the Curb Stomp is actually a good idea, and it harkens back to the time Randy Orton was punting everyone in the head. That made for good TV, and it was the realism of that angle that sold the product. To say that Stone Cold is irked by the current direction, though, would be an understatement.

They call it the Reality Era, but it’s anything but reality. And on the other note, going into unknown territory or uncharted waters, back in the day, man, whether you’re a fan or not of some of the storylines or angles we were shooting, they were edgy as hell and we weren’t afraid to push into those uncharted waters or territories.

Listen, inserting “reality” into a scripted show is probably WWE’s toughest task. On the one hand, it has to be choreographed. On the other, it has to look like it’s not. That’s a tall order, but WWE is taking some strides in the right direction. For the Cruiserweight Tournament (CWC) coming up, WWE has been putting info out there that the tourney will follow a sports-like format. I’m guessing they’ll have bracket breakdowns, match-up analysis, and then there’s this “weigh-in” that they did the other day:

So perhaps the CWC is a litmus test for more “reality”-based programming efforts. Let’s hope so.

(via The Steve Austin Show/transcript via Wrestling Inc.)