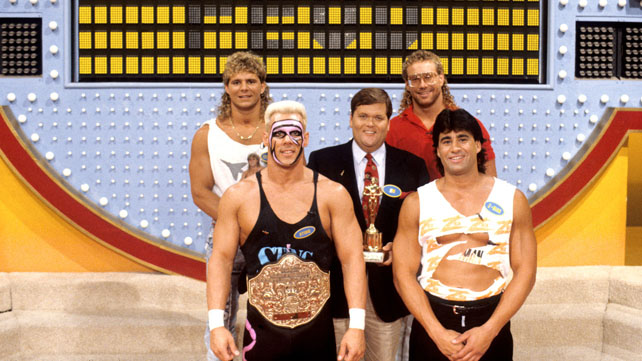 Family Feud is a time-honored American tradition. The show has been around for decades, has had great hosts (and Louie Anderson) and has become sort of a viral sensation as it’s maneuvered the age of social media. But if you’re a wrestling fan, you can probably remember the crossover episodes that would happen ever so often. I distinctly recall the 1992 Family Feud (and Ray Combs subsequently bombing a stand-up routing at Survivors Series a year or so later), and I’ll still stop and watch any time wrestlers are on the show. With that said, I scrounged up all the times I could find of wrestlers on the greatest show on Earth, and it’s pure throwback fun.

WCW (Sting, Brian Pillman, Z-Man, Brad Armstrong and Jim Ross) vs. GLOW (Mt. Fiji, Godiva, Justice and Jackie Stallone). This is a Wrestle Bro extravaganza… and Jim Ross. So much is going on:

1. Who the f*ck is the Z-Man?
2. Jesus Christ, Brad Armstrong’s glasses.
3. Brian Pillman being a regular guy next door is crazy, considering the loose cannon deal he was doing at the end of his career. He’s lucid, regular and sort of bland.
4. Sting is a bro’s bro.
5. Jim Ross wants no part of this. I bet Shockmaster or someone was supposed to be there, and Ross had to fill in. He doesn’t look remotely like he belongs.
6. One thing you’ll notice about these Family Feud episodes is that the games are like five rounds. Usually, there are usually three rounds before one family wins. But on these specials, nobody gets anything right, so they have tons of rounds. It’s like “Celebrity Jeopardy” on SNL.

The star here is Steve Harvey, who is full-on creep mode. He even says “jumping is good” while the Knockouts are celebrating. It’s glorious. I didn’t know there was a “mention her tits as often as possible” chapter to Think Like a Man. Look at him.

WCW (Sid Vicious, Dutch Mantell, Master Blaster Steel (Kevin Nash), Tony Schiavone and Kevin Sullivan) vs. Unnamed GLOW Wrestlers. This is a treasure trove. Kevin Nash is in part-time Master Blaster voice. Sid Vicious is clearly working as hard as he can to not say something stupid. The highlight is Dutch Mantell letting everyone know he need stop take dumps after big meals. WCW, I love you.

WWF (Jimmy Hart, Nasty Boy Saggs, The Mountie, Sensational Sherri and Bobby “The Brain” Heenan) vs. Bodybuilders. I can’t find the second half of this episode, but I’ll never forget it. Bobby Heenan went on second in the big money round, and he had to get like 140 points for the prize. I swear, I don’t know if it was a work or not, but I really believed Heenan was a legitimate MENSA member or something. He might be. God, Bobby Heenan is the best.

I really wished Booker did the whole show in King Booker character, but God only gives us the blessings we can handle. I’m also reminded again how insufferable Mr. Kennedy was. He was going for the Dane Cook thing, and I hated it. Also, Layla is a goddess. A living, breathing, goddess.