The 7 Greatest YouTube Videos Proving That Wrestling Is Fake 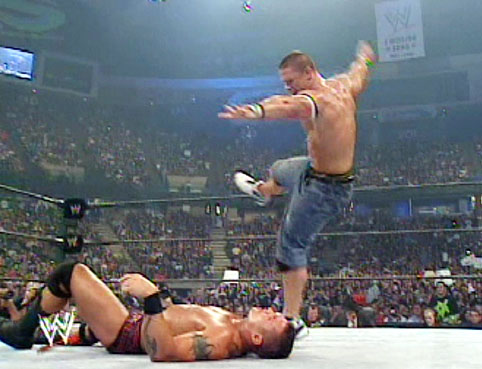 Wrestling is fake. There are predetermined outcomes and choreographed moments. Sometimes, guys don’t even really punch one another in the face. This is something most of us have known for decades. However, the debate still rages on in society’s foremost space for intelligent analysis: YouTube. These video sleuths have cracked the code to how wrestling is fake by pinpointing tiny, irrelevant moments, zooming in, slowing down the video and usually putting bad hard rock in the background. Without these important videos, we’d never know that wrestling isn’t a real competitive sport between musclebound men with catchphrases.

The Phantom Knuckle Shuffle: There are literally hundreds of videos using the Five Knuckle Shuffle as proof that wrestling is fake. Spoiler alert: John Cena misses every Five Knuckle Shuffle. He just punches the mat, and the guy pretends that Mjolnir came down from Asgard to hit him square in the forehead. These YouTube sleuths have zoomed in, slowed the video down and shown that Cena never hits the move. NOW YOU KNOW THAT WRESTLING IS FAKE OR MAYBE JUST JOHN CENA MATCHES ARE FAKE.

Chin Lip Sync: You know, I wasn’t clear that Shawn Michaels missed Mr. Kennedy by a foot. But the replay accompanied by the rock music really drove it home. Question: Does YouTube have a catalog of unlicensed terrible music to play, because half the wrestling videos play this song for random.

1. Brock Lesnar cranking on Triple H’s neck and supposedly breaking his arm, even though the arm didn’t really move at all.

2. Triple H showed up at a Floyd Mayweather fight like seven hours later with nary a cast.

Still, the YouTube sleuth pinpointed Triple H saying, “Here we go,” to give Brock the cue to start the fight. This is trying to sound smarter than you are.

Definitely: Vladimir Koslov was the best wrestler to have ever appeared on The Wire, whose finishing move was headbutting people in the chest. Was his finisher fake? Doesn’t matter… but this dive thingy is proof that wrestling is a work!

Phantom Trip: Rey Mysterio’s wrestling career is based on intricate flips and cooperation with his “opponent.” His finisher is kicking a guy who gently places himself between the ropes, so that Mysterio can spin between the ropes to hit him with his ankles. But what’s fake about this match? A phantom drop toe hold. But fear not, it’s only SmackDown that’s fake.

Punches Are Fake: Spoiler: This video is half as long as it takes to set up the Kill Switch.

Educated Feets: Where else can you get fake wrestling analysis and political hot take? This video has it all. Wrestling is faker than Hillary Clinton’s smile. It’s also more disappointing than Obamacare and has more red tape than a Senate session, amirite?