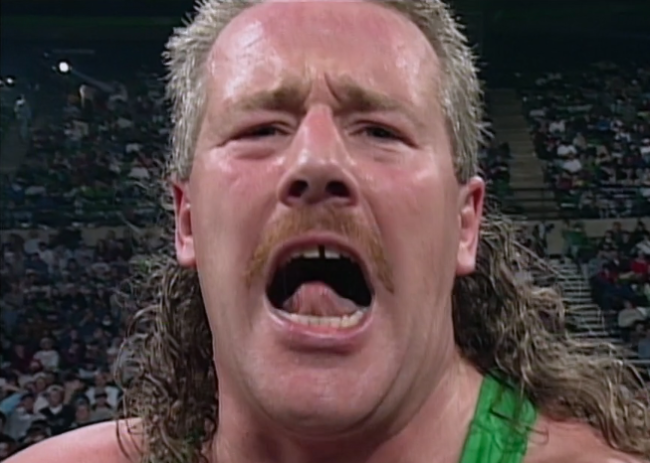 – Click here to watch this week’s episode on WWE Network.

– If you’d like to read about previous episodes, check out the WCW Monday Nitro tag page. We’ve also started up a vintage Best and Worst of WWF Monday Night Raw column, so check that out.

– Share the column. If you don’t, I’m going to put on white pants and shake my butt at you. It’s even worse than it sounds.

Please click through for the Best and Worst of WCW Monday Nitro, originally aired on February 19, 1996.

Mongo doesn’t explain Pepe’s winter gear because he’s busy Yes-And’ing Eric Bischoff’s announcement that Hulk Hogan would get a “revenge match” against Arn Anderson for what happened last week, stating that nobody has ever beaten Hulk Hogan twice. Mongo says he’s “lookin’ for total and ultimate revenge on this man’s body tonight.” Maybe it’s better that they aren’t talking about the dog.

Just to throw it out there, no announce team has ever been as biased in favor of a wrestler as the Nitro announce team is for Hogan. Heenan is Heenan, but Bischoff and Mongo are so far up Hogan’s ass they’re spitting up chunks of Brutus Beefcake. Whenever Hogan loses, they have to comfort us and be all, “it’s all right, children, this was a mistake.” Arn could drive a f*cking army tank to the ring and run over Hogan in it, and if Hogan lost Bischoff would still yell BULLSHIT, flip the announce table and storm away with tears in his eyes.

Last week Arn Anderson utilized interference from a 13-time World Champion and two foreign objects from two different female valets to get a cheap win on Hulk Hogan. When he lost, Hogan regained 100% health, beat up everyone and demanded a rematch. A REVENGE MATCH. FOR REVENGE.

He gets it in this week’s opener, and somehow the finish is even worse than ‘Hogan has the world champ AND the guy he’s wrestling beaten clean in the middle of the ring simultaneously but women be trippin.” Hogan decides he’s going to be a dick and tries to beat Arn with the figure four. That causes The Taskmaster and Macho Man to run out at the same time. Taskmaster gets in the ring and does nothing, so Savage jumps in and punches him out. The referee looks up and sees Savage in the ring, and despite him not touching anyone or doing anything CALLS FOR THE DQ and gives the match to Arn. It’s so weird. Hogan somehow wins cleanly and still gets DQ’d despite Arn never being touched. I’m telling you, these WCW referees just threw it out at the first sign of trouble. I want Nick Patrick to DQ Savage because it’s raining outside.

Anyway, now Arn is 2-0 against Hogan. Hogan doesn’t get his heat back on everyone at the end of the show. Hahahahah sorry, couldn’t type that with a straight finger.

Bischoff and Mongo are inconsolable about Hogan’s loss, and Mongo says it “can’t happen.” Heenan drops a pipe bomb: 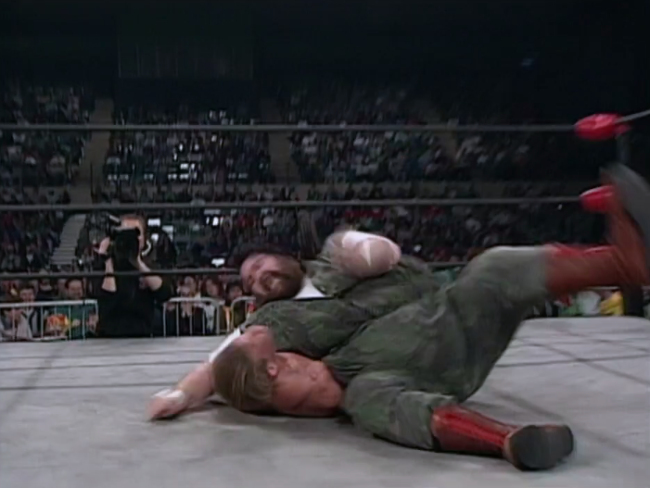 Giant Haystacks almost shoot crippled Scotty Riggs on last week’s episode, so this week they’re like, “stand still until it’s time to go home, then fall down. That’s it.”

This week the mighty LOCH NESS MONSTER wrestles Alex Wright, and Wright does an admirable job of trying to smartly wrestle a guy who looks and moves like he just ate the Liberty Bell. Lots of big, lanky dropkicks, lots of sticking and moving and a great moment where he applies a sleeper from the top rope and just sits there for half a minute. Sadly Wright falls victim to the Monster’s most athletic move: a kick that gets about balls-high and knocks Wright “out of the air” by sheer will. One armpit drop later and it’s over. Loch Ness has one more Nitro match to go. It’s against Lex Luger and lasts 13 seconds. I might’ve just fallen and hit my head on the coffee table and dreamed it.

Also, here’s your weekly reminder that you should stay away from the comments section of every Alex Wright video.

Best: My Name Is The Belfast Bruiser And I Love To Fight

Here’s the debut of THE BELFAST BRUISER, better known to most as Fit Finlay. He’s facing Brad Armstrong in a rematch from the weekend shows, and it’s the perfect pairing of horrible looking dudes who are basically as boring as possible but still objectively great pro wrestlers. Finlay’s a lot better than Armstrong, but you get what I’m saying. One dressed up like a Freebirds bird and a fake Spider-Man and the other got into a paternity fraud angle with his mute leprechaun son. Same difference.

The Bruiser is here looking for Lord Steven Regal, and like Regal he’s one of those guys I couldn’t stand watching as a kid. He’s so boring. And also just like Regal, he’s someone I grew to understand and appreciate as I got older. He’s just BRUTALIZING people, and poor Brad Armstrong has his game raised tenfold because he gets punched in the face a few times and decides he should fight back. What results is an entertaining and hard-hitting little match, with the Bruiser winning via the most organic tilt-a-whirl powerslam you’ll ever see. It doesn’t look like he’s “doing a move,” it looks like he caught a guy running and improvised. It’s great.

All Brad’s really got is the “USA” chants, which he practically begs for by wearing a USA jacket covered in American flags and looking like a pro wrestling Lee Greenwood.

Worst: Most. Interference. Ever.

Yeah, this is one of those Nitros where they think they’ve only got four main-eventers and swirl them in a big boring pot. Sting and Lex Luger are off on an expedition to Mars or something, I don’t know. Hogan and Anderson open the show, so Savage and Flair close it out. Yes, there is outside interference. Yes, it ends in a DQ, and yes, it involves shoes.

The matches don’t even matter. They’re just killing time to get to the disappointment. Savage has Flair beat clean (of course), but Miss Elizabeth gets on the apron to distract him. Nick Patrick gets between them, which allows Woman to remove her shoe and toss it into the ring. Savage intercepts it, blasts Flair in the face. He covers, but before the ref can count three Kevin Sullivan runs out and does a FULL LAP around the ring. He never touches them, he’s just running in a big circle. Woman scratches Savage in the eyes in front of the referee to break up the pin but he somehow misses it. Sullivan is finally in position and climbs up on the apron himself, drawing Nick Patrick’s attention AGAIN, because I guess all he can see is aprons and the ring’s in his blindspot. Hogan shows up and pulls Sullivan down, which creates DISTRACTION NUMBER WHATEVER and allows Arn to zip in, DDT Savage, roll Flair on top of him and bail. Flair gets the cheap victory as like 45 other guys get about halfway down the ramp and go “oh, that’s it? Okay, we’ll interfere later.”

The pinfall immediately recharges everyone, so it turns into a 3-on-2 attack on Hogan and Savage. Sting doesn’t save them. Luger doesn’t save them. None of the pre-existing WCW babyfaces like Johnny B. Badd or Konnan lend a hand. No, the only person who can save the Mega Powers now is … Brutus Beefcake pretending to be the Ultimate Warrior? Oh go f*ck yourself.

WCW wanted the Ultimate Warrior but could never seem to get him, so every year or so they’d debut a Warrior-esque guy to be “their” Warrior and it was uniformly terrible. The most famous example is The Renegade, but we should never forget THE BOOTY MAN, aka Brutus ‘The Barber’ Beefcake in white pants with butt colors and arm tassels doing all of Warrior’s taunts.

Seriously, if you can watch this episode, watch how The Booty Man takes out the Horsemen. He’s pumping his fists in the air and stomping his feet like Warrior, and you know up in the booth Bischoff can’t find the words because he’s thinking, “god dammit I wish this was the guy I want.” First of all, it’s Brutus Beefcake. Second of all, you gave Beefcake an ill-defined ASSES gimmick, and you couldn’t even say ass. He’s not the Ass Man, he’s the “Booty Man.” That’s like calling it Heck In A Cell. Thirdly, it’s f*cking Brutus Beefcake doing an asses gimmick and doing Warrior taunts.

Oh well, at least it results in Hulk Hogan saying “booty” a thousand times in a promo.