– Click here to watch this week’s episode on WWE Network. If you’d like to read about previous episodes, check out the WCW Monday Nitro tag page.

– Share the column! These shows are almost 20 years old, so your likes and shares and other Internet things make a difference.

Mongo turns his entire explanation of Pepe’s novelty glasses into one sentence, and it’s quite possibly the most Mongo thing he’s ever said:

“Wooo I got to reiterate that my friend, you see the little guy, he’s got the eyes poppin’ out, I saw Macho Man backstage, the eyes are out, he’s got the slabberin’ jaws, HE’S THE CUJO OF THE WCW, I don’t know what we’re gonna do, HE’S GONNA TEAR UP THE WHOLE JOINT!”

I also would’ve accepted “my dog’s wearin’ the funny glasses, look at ‘im.”

Worst: Bischoff Giving Away WWF Taping Results And Being A Total Creep

Remember when Madusa showed up with the WWF Women’s Championship, threw it in the garbage in a declaration of promotion superiority and then disappeared for a month until her “you’re the mistress of a flustered colonel” angle was ready? WCW continues that kind of forward thinking (that will totally never bite them in the ass) of giving out pre-taped WWF Monday Night Raw results on live Nitros.

The Bisch does earn points for describing Aldo Montoya as a “bigger yawn,” which is extremely accurate.

This week’s opening match is a mildly fun thing betwixt the American Males and the
Public Enemy that ends with a move called the “Public Enemy Sandwich,” aka “Brigitte Nielsen’s Best Night Ever.” They put a guy (in this case, Scotty Riggs) on a table on the outside. Johnny Grunge stands on the apron with one hand on the top rope and Flyboy Rocco Rock jumps over the rope INTO him so they both fall backwards onto Table Guy. It’s a way better move than the Nasty Boys Sandwich, which is two moldy end pieces with an entire pack of bologna in-between, still in the plastic. With Miracle Whip.

The match ACTUALLY ends with a relic from an era we assumed has passed by now: the Bill Watts WCW rule that throwing someone over the top rope is a disqualification. It makes sense from a “protecting our athletes” standpoint, but not from “have exciting matches and not cripple your momentum with a technicality.” Public Enemy doesn’t do it by accident or in the heat of the moment, they calmly hoist Riggs by his own petard, walk him across the ring and chuck him over. They were totally in control, and chose to lose the match for no reason.

Lucha Underground should institute the over-the-top-rope DQ rule for season 2, and every match should end in less than 30 seconds.

Worst: Mean Gene And These Ladies Rig The Lethal Lottery

So, the Lethal Lottery.

If you aren’t familiar with the concept, it’s hard to explain in a sentence. It was a tag team tournament of sorts with the names drawn and pairings determined at random. If you won your match, you’d move on to an every-man-for-himself battle royal called Battle Bowl, where you’d win … something. It changed a lot. Sometimes you’d win a championship, sometimes you’d win a class ring, whatever. When they started, they actually made the teams seem like they were drawn at random: Cactus Jack would have to team with Sgt. Buddy Lee Parker, Jushin Thunder Liger would team up with Bill Kazmaier, and so on.

By 1996, they’d given up on the randomness and mailed the pairings in hard. You either ended up with your tag team partner thanks to “luck,” or you’d be against them. So you’d get totally random matches like ROAD WARRIOR ANIMAL and RICK STEINER vs. ROAD WARRIOR HAWK and SCOTT STEINER or whatever. If you were a singles wrestler, you’d get teamed up with the person you were feuding with. Lord Steven Regal ends up teaming with the Belfast Bruiser and Ric Flair ends up teaming with the Macho Man thanks to dumb luck and nothing else.

We see some of the selection process, and it explains the entire thing. Mean Gene draws the names at random from envelopes held by “models,” but they’re only holding four at a time, so how f*cking random is it gonna be? Whenever Gene talks to them or tries to riff on the name he’s drawn, the women just kinda nod and say something borderline sexual in weird, imperfect clone voices that make you wonder if they’re human beings. “Got any plans for later, ladies?” “PLARN WID YOU MAIN JAIN TEE HEE HEE” 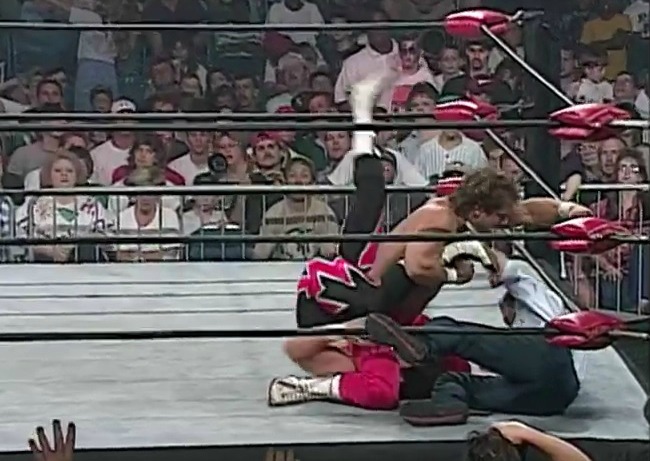 Best: Benoit Vs. Guerrero
Worst: … With A Super WCW Finish

Chris Benoit wrestles Eddie Guerrero again, and it’s good. These two could stand ten feet apart and do angry charades and it’d be at least three stars. The problem is in the finish, which is so incredibly WCW it makes you want to jump through your television a la Captain N, time travel back 19 years and punch Randy Anderson in the face for not trying harder.

Bischoff is obsessed with calling hurricanranas and headscissors takedowns “necktie takedowns,” so Guerrero does one of those. That turns into a sunset flip and Benoit sits down on it and grabs the middle rope for leverage and the cheap win. The problem is, as you can see in the picture, Benoit is straight up looming over the referee. He’s practically resting his arm on Randy Anderson’s face, but ol’ Pee-Wee “can’t see it.” Blind referees are a wonderful trope, don’t get me wrong, but at some point you’ve gotta just say you see the damn cheating and make them do something else.

And now, the best part of the episode.

Mean Gene introduces “a vice president with the World Championship Wrestling organization,” his good friend Rob Garner. He’s here to talk about the Macho Man, who is in the middle of a story I feel like we aren’t seeing enough of. The announce team spends all night putting over how dangerous Savage is and how due to him dropping too many flying elbows after matches and being upset that his ex-wife’s taking his ‘Dial M For Monkey’ money, the backstage area is FULL OF COPS DEDICATED TO WRANGLING AND ARRESTING HIM IF HE GETS OUT OF LINE. Like, what’s the worst he’s done? Interrupt one of Flair’s entrances? Emasculate Bobby Eaton? Can you go to jail for making Bobby Eaton feel bad about himself?

They’re almost immediately interrupted by Savage himself, who has somehow managed to avoid the wall-to-wall police. Garner tells Savage that the WCW Championship Committee cares about him and that his recent actions have been crazy, and if he doesn’t chill, the ramifications will be severe. Savage is consumed with cocaine and cartoon monkey rage and can’t take the hint, screaming “RAMIFICATIONS! THAT’S A BIG WORD FOR A SUIT AND TIE!” It’s all downhill from there.

Savage blames “all you guys down at city hall and WCW” for his problems, because Macho Man for-real assumes that all non-fighting grownups work at city hall. He then says he will BLOW UP CITY HALL. Randy Savage is going to explode a government building because Ric Flair’s banging his ex and nobody else is freaking out about it enough. Mean Gene’s Good Friend Rob Garner is like “what” and says if Savage can’t relax and stop committing terrorist acts/making Earl Robert of Eaton feel like shit that he should seek professional help. It’s a reasonable request, considering he said “we care about you” and Savage responded with “THE GOVERNMENT IS CORRUPT AND OUT TO END MY WRESTLING CAREER.” Savage’s response to being told he needs therapy is glorious:

You can almost see him regressing to a childlike state in the middle of that, can’t you? I hope the last thing Hulk Hogan said as we was waltzing out the door to film Three Ninjas was, “while I’m gone, act like you’re me.” 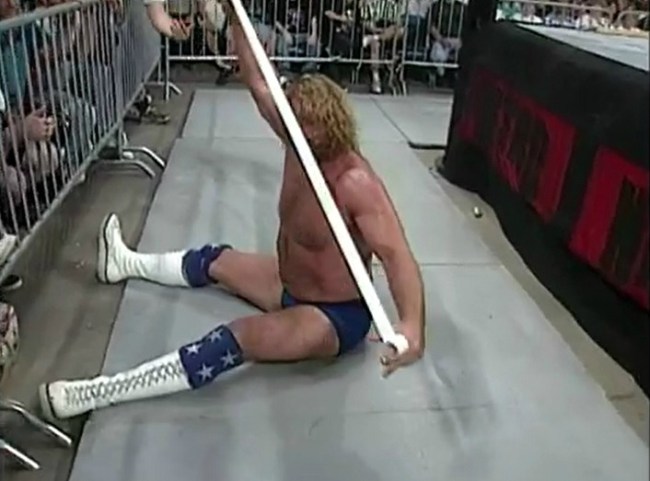 Jim Duggan is still cheating his ass off. Motherf*cker can’t beat Meng one-on-one so he brings a f*cking piece of lumber in the ring and tries to attack him. Meng fights him off, so Duggan rolls out of the ring and loosely wraps his hand in electrical tape, which as you’ll recall gives him SUPER PUNCHING POWERS. He’s allowed to put shit on his hand and punch people without consequence for some reason and wins the match. Why wasn’t f*cking Jim Duggan in the Dungeon of Doom?

Worst: The Kind Of Finish You Get When “All Titles Are On The Line”

Okay, so, the main event.

At the top of the show, Bischoff announces that it’ll be Ric Flair and The Giant teaming up against Sting and Lex Luger, with ALL TITLES ON THE LINE. If Flair and The Giant win the match, they become the new Tag Team Champions. If someone pins Luger, they become Television Champion and their team becomes Tag Team Champions. If anybody pins Ric Flair, they become World Champion. Bischoff explains that even The Giant can pin Flair, which makes no goddamn sense whatsoever but is sadly not the last time they go to that well.

The stage is set, and there’s a 1000% chance it ends in bullshit, right? Well, we’re a few weeks into COFFEE ARMAGEDDON, Woman’s dedication to turning thrown cups of coffee into WCW’s most deadly weapon. Sting and Luger back Flair into a corner and he’s about to die, so Woman sneaks him a mug of the Death Folgers. He tries to throw it in their faces but WHOOPS, he accidentally splashes The Giant. The referee calls for a DQ, because you can seriously lose a match by getting your own partner wet by accident. No titles change hands, because f*ck you.

After the match, The Giant cuts an amazing promo about how being coffee’d in the face has LIT A FIRE UNDER HIM and he now knows he must BE THE TRUE GIANT. Hahahah what? He challenges Flair to a championship match next week and Flair accepts, because I guess he knows he can hit up Starbucks before then and more or less wield Mjolnir.

Be here next week when ALL BLENDS ARE ON THE LINE.