The Best And Worst Of WCW Monday Nitro 5/13/96: Tabled For A Later Date 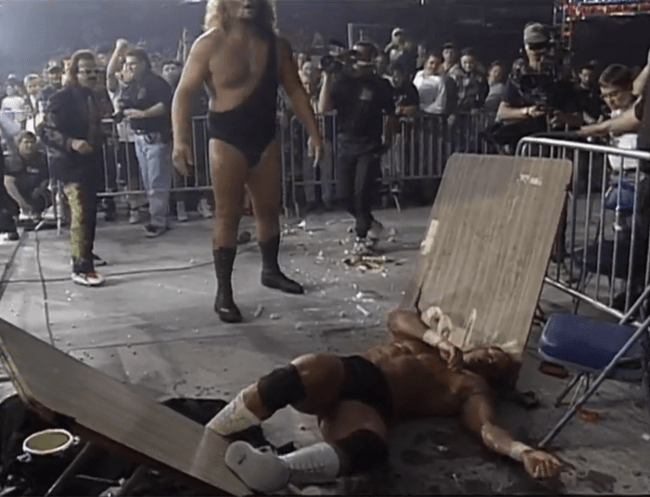 – Click here to watch this week’s episode on WWE Network. If you’d like to read about previous episodes, check out the WCW Monday Nitro tag page.

– In case you missed it, the retro Best and Worst of WWF Monday Night Raw column has jumped ahead to 1996. The episode that aired against this week’s Nitro will be up on Friday.

– Share the column! These only get like 25 likes and they’re my favorite thing I do. Help me out!

“Speaking of Heartbreak Hotel, look at the little guy, he’s in Nashville, he’s trying to get discovered, ladies and gentlemen.”

Speaking of my actual heart breaking, this is the final Pepe costume. Mongo formally begins his feud with Ric Flair later in the episode, Slamboree ’96 happens and we return next week with the first two-hour Nitro. Razor Ramon shows up, a new era of professional wrestling officially begins and we say goodbye forever to the days when a dog in a costume was legit the second or third best man in a four-man booth.

The story I’m writing in my head is that Pepe got discovered, and worked as a successful canine Elvis impersonator in Nashville until his happy, fulfilled death after however long chihuahuas live. 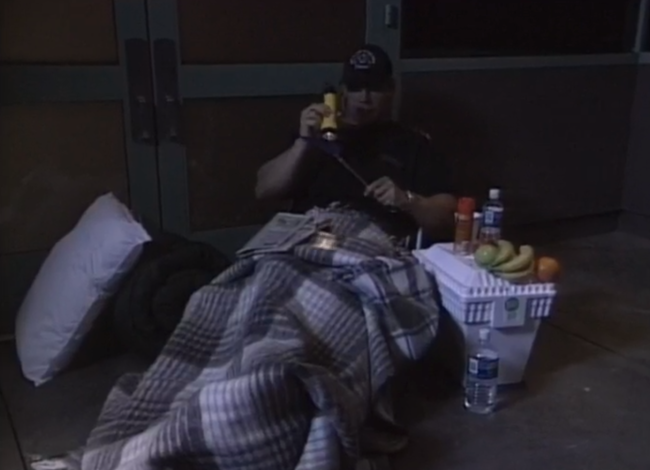 This week’s episode of Nitro peaks in its first moments, when we find out that Lex Luger is camped out outside the arena to make sure he’s there for his title shot against The Giant. He’s missed two important matches in recent weeks, so he’s out there in a lawn chair with a blanket, flashlight and fly-swatter. The best part is the fruit spread. Just kidding, the best part is that Lex Luger is insane.

You know, I can get wistful about Pepe all day, but I’m going to miss Mongo as well. I remembered him as being a lot worse than he was. He sounded like a goober, sure, but he also sounded like he cared about what was happening, and made sure to put over whatever was happening. Also, he thinks people who camp out for Black Friday are cannibals. 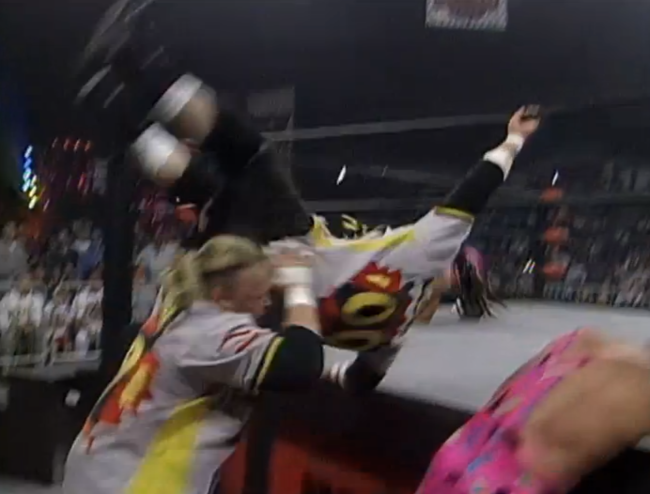 Best/Worst: Public Enemy Is Really Into The “We Accidentally Hit Each Other With Our Jumping Fatness” Finish

Say what you will about The Public Enemy, but they were committed to the theme that the only way they could lose matches is by accidentally jumping in the wrong place. Sometimes they’ll set you up on a table and jump off the top rope but you’ll move, and they’ll go crashing through alone. Sometimes they’ll set up for The Public Enemy Sandwich and the guy’ll move, and they’ll tumble through a table together. Sometimes they just run and jump over the ropes and kill each other. If TPE has to lose, you can be damn sure it will be by accident.

They wrestle The Steiner Brothers in the opening match, and you’d think the Steiners would be able to just suplex them to death and pin them clean, but NOPE, total miscommunication. One TPE flips out onto the other and ass-smashes him. The strategy for wrestling them should just be bringing them both in the ring and doing Irish whips until they’re unconscious. 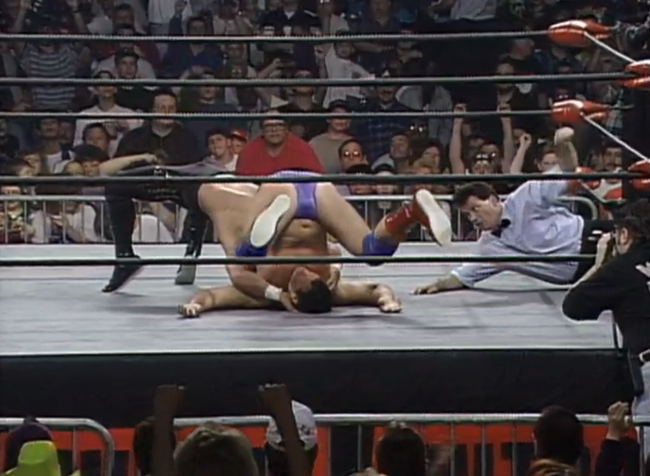 I talk to a lot of people who don’t “get” William Regal. If you read that and go “whaaaaat,” don’t worry, you’re one of the good ones. Regal wrestles such a specific style and is such a specific thing in his persona and the way he presents himself that he can be off-putting to newer or casual wrestling fans. He’s good at being a shifty, dangerous guy in the background.

My version of Regal is Dave Taylor. I’ve never been able to get into him, because he plays to me like Discount Store William Regal. He’s doing Regal’s character and doing his moves and wearing his gear, he’s just … not Regal. It’s fine, I guess, because more than one guy like Regal is ideal, but every time I see him I wish he was someone else. That’s not a good sign.

He wrestles Chris Benoit and it’s short, but good. Silent but deadly, you might say. Benoit beats him with a dragon suplex, and the announce team spends the entire match talking up some weekend-show angles where Benoit’s suddenly able to intimidate anyone he talks to. They’re like, “he talked to Arn Anderson and Arn BACKED UP! And then he also talked to The Taskmaster and The Taskmaster BACKED UP!” I don’t know if this is when plans for the Rogue Horsemen were still happening or what, but it’s weird to have characters effectively disappear from the Nitro timeline and show back up with so much going on. Maybe he was working a Juvenile gimmick. 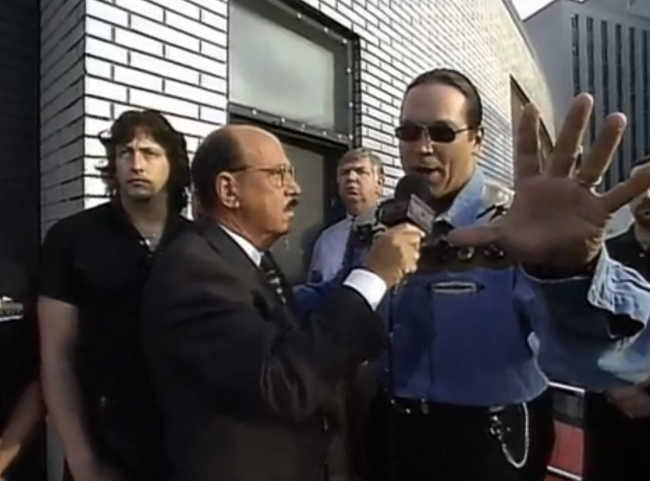 During the broadcast, Mongo hears that Ric Flair is backstage hitting on his wife. He’s been fine with Flair coming down to ringside and flirting with her because that was in public, but cornering her backstage a la Shawn Michaels is too much. Mongo is gonna handle his business.

Spoiler alert: he attempts to make a man stop trying to f*ck his wife by having tag-team matches with football pals.

The good news is that we remain backstage and run into the Macho Man, who has been banned from the building because he is whacked out of his gourd.

When we are both cats?

Best: Macho Man Is Not OK

I want that promise to be true. Several (several) years from now when Mean Gene Overland dies, I want him to arrive at the Pearly Gates and run into the Macho Man. I want him to be all, “Hey Mach, what were you gonna tell me about out in the parking lot back at Nitro in Nashville in May of ’96?” And then Savage is all, “Oh, I don’t remember. Something about wanting to beat up Flair at Slamboree.” Gene can get all depressed because he waited decades for that.

I could have closed-caption-capped the entire scene, but this is my favorite quote: 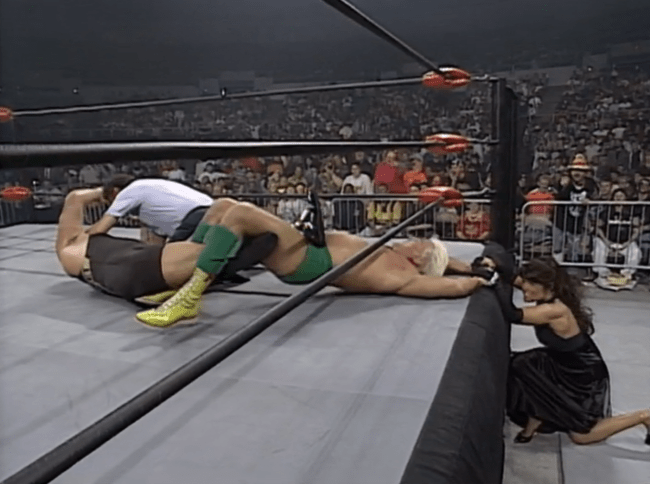 Ric Flair wrestles VK Wallstreet, and I am already asleep before that sentence ends. The best part is that Flair is clearly a billion times better than this dude, but still cheats like he’s wrestling Sting. He has Elizabeth distract the referee, gets an assist from Woman on the figure four, the works. I’m surprised he didn’t have Arn run down and put the boots to Wallstreet for fun. I like to think of it like a practice run. Flair’s failure to effectively cheat cost him his match against The Giant, so now he’s cheating for fun against lower-tier guys to get his groove back.

Anyway, Flair, Woman and Elizabeth stick around to have dinner at a nearby table, which totally doesn’t become important later. Gene interviews Flair and asks him about Debra McMichael, and Naitch torches Mongo by saying Mongo “dares to be a defensive lineman talking to Joe Namath.” Five stars.

Best: A Non-Finish That’s At Least Pretending Like It Matters

Lex Luger has eaten a bunch of bananas, killed every fly in Nashville and consumed unhealthy amounts of raw meat (I’m assuming) so it’s time for the main event. It goes well for him, too, as he’s all pumped up and fresh from the streets and knocking The Giant around with surgically-repaired forearms.

The Giant ends up copping out and taking the easy way out, getting disqualified (I think?) for chokeslamming Luger through Ric Flair’s dinner table. It’s a nice table bump, made 1,000 times better by Flair standing beside it in a furious rage that The Giant’s messing up his spread. He stands still, shakes his arms, throws his head back and kinda head-shake screams to the sky. RICH GUY FURY!

The last like, 8 minutes of the show are devoted to Sting kneeling over his fallen friend and being outraged that The Giant could somehow go that far. Keep in mind that The Giant was just superkicking a 700-pound sea monster in the face at Uncensored, so Sting can keep his stupid comments in his pocket.

This sets the stage for the Sting vs. The Giant showdown at Slamboree, and no, it does not begin with Luger camped out outside the venue in a body cast.