The Best And Worst Of WWE Smackdown Live 4/18/17: Expect The Unexpected 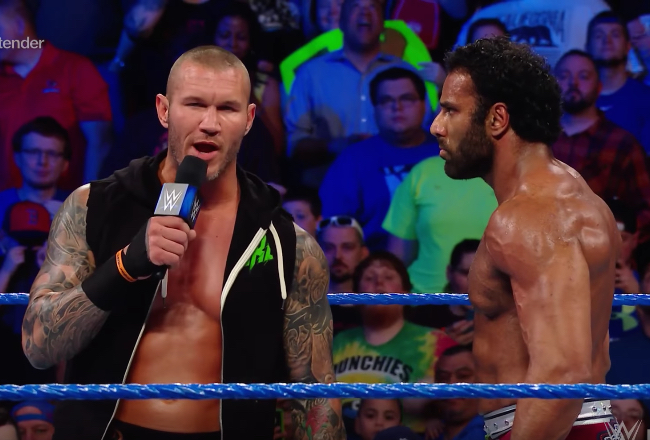 Good Smackdown Live this week; at least I enjoyed it. Things continue to feel fresh after the Superstar Shake-up. But nothing’s moving too fast. We’ve still got some time before the next Smackdown-only pay-per-view, and you can certainly feel it by the way some things are being stretched out. It’s sort of a post-WrestleMania limbo, while at the same time some people’s careers seem to be skyrocketing virtually overnight. It’s an interesting time, and I sure am intrigued by where this is all going to end up.

We’re getting into that time of year where WWE is really fun and interesting for a while, so why not take a moment to give The Best and Worst of Smackdown Live a share on your favorite social media platform. While you’re at it, follow With Spandex on Twitter and like us on Facebook.

And now without further ado, here is The Best and Worst of Smackdown Live for April 18th, 2017.

The first match on this week’s Smackdown Live is another Andre the Giant Battle Royal rematch. It was a “Six-Pack Challenge” match between Sami Zayn, Dolph Ziggler, Jinder Mahal, Luke Harper, Erick Rowan, and Mojo Rawley. And get this, the winner of this match is the new number one contender to Randy Orton’s WWE Championship and will face him at Backlash.

This match was your typical Six-Pack Challenge, relying more on moments than storytelling. But it wasn’t bad, and it got better as it went along. There are definitely worse ways you could spend twenty minutes in front of your television. But the contents of the match isn’t what anyone’s going to remember about this. With help from the Bollywood Boys, or as JBL calls them, “Who are those guys?,” Jinder Mahal pins Sami Zayn to become the new number one contender. And I think that’s a great decision.

When I saw this match announced on Raw, I knew right away that Mahal was going to win it. I’m a little surprised that so many people were shocked by this outcome. Who did you think was going to win? Somebody had to win it, and it’s not like any of the other participants were that primed to be number one contenders either. It wasn’t going to be any of the faces, so that automatically took Sami, Mojo, and Harper out. It wasn’t going to be Ziggler, because he has a date with Nakamura. And it wasn’t going to be Erick Rowan either, because c’mon … it’s Erick Rowan. So it had to be Jinder Mahal. And honestly, I don’t think you could find a better opponent on the roster for Randy Orton right now.

Randy Orton is not exactly the most over guy on the show, but for the foreseeable future he is the WWE Champion, and the number one face on the brand (even if he doesn’t get the kind of pops that AJ Styles or Nakamura get, outside of when he hits the RKO).

Orton is not the kind of guy you get excited to see. I’ve never been on my way to a WWE event and thought to myself, “Oh boy, I get to see Randy Orton tonight.” And that’s coming from someone who really likes Orton. I think he’s a great and at times underrated performer. But it’s hard to get excited about him, especially when guys like Sami Zayn and Nakamura are on the same show.

So you can’t send someone like them to face Orton on a pay-per-view so early in his title run. You can’t risk Orton continuing to get a lukewarm reaction. You can’t feud him right now with someone the fans like. To keep him a face, you need to pit him against someone nobody is going to cheer for, who no one wants to see win. If you want Randy Orton to get a hero’s reaction right now, you need to feud him with Jinder Mahal.

And it already seems to be working. The crowd showered Jinder with boos in his post-match interview with Renee Young. They sounded genuinely upset that he won. It played perfectly into Mahal’s promo about the fans not accepting diversity. When Orton’s music hit, he got a sizeable pop.

The two of them look good in the ring together too; that’s another reason when Jinder is so good for Randy right now. Mahal is a big jacked dude; no matter what his win/loss record looks like since his return, Randy is going to look impressive in the ring when he beats him. We couldn’t get through a Randy Orton appearance without a reminder that he still has unfinished business with Bray Wyatt.

Randy starts talking about him and mysteriously a Bray Wyatt pre-tape plays. I completely tuned out, rolled into the fetal position, and began rocking back and forth, muttering to myself, “only two more weeks … only two more weeks.”

Worst: Not A Glowing Review

Earlier in the night, Smackdown opened with an in-ring promo from Charlotte. The intent behind it was great; she was out to complain that she has already been on Smackdown Live for a week, yet for some reason she is still isn’t the Smackdown Women’s Champion.

Unfortunately, the dialogue that was written for her is so poor that it doesn’t let the idea shine through. She wonders out loud where Daniel Bryan and Shane McMahon might be, and speculates that they may be “binge-watching Fast and Furious.” And then says that she’s “fastly getting furious.” I’m fastly getting furious at the words she’s saying. Binge watching Fast and Furious sounds like something someone Vince’s age thinks Millennials sound like. I could hear Mr. Burns saying that.

It doesn’t take long for interim champ Naomi to come along and interrupt. The Neon One tells Charlotte that if she wants a title shot, she’ll give her one right now and then jumps her. This brings out Shane McMahon, who can’t stand the idea of having a title match unless the challenger has already pinned the champion on the previous week’s show. So he makes a match between Charlotte and Naomi for later in the night. And if Charlotte wins, she will earn a title shot next week.

Nine minutes into this week’s show and we already have a match set for next week.  And people say WWE doesn’t do long term booking anymore. There was one fun piece of business at the end of this segment. After things had settled down, the camera moved on from the ring and was showing us the Smackdown announce team of Tom Phillips, Byron Saxton, and Biff Tannen when suddenly they are interrupted by Charlotte who is back in the ring, attacking Naomi.

Charlotte grounds her and pounds her, and then throws Naomi out of the ring before holding up the belt. But wait! There’s more! Naomi jumps back in the ring and attacks Charlotte again, throwing her out of the ring and hoisting the belt on the air. It managed to get me looking forward to their match when the rest of the segment didn’t.

Unfortunately Charlotte and Naomi don’t seem to have much chemistry in the ring together. Their timing is not great, a lot of things came off as slightly sloppy, and they were telegraphing spots from a mile away. That’s also the same distance Charlotte’s knee was coming from connecting with Naomi’s face during her knee drops. The end saw Charlotte stop herself from getting hit with the Rear View. Instead, kicking Naomi in the back and then hitting her with Natural Selection for the pin.

Maybe they should have just put the belt on Charlotte here. I can’t say I’m excited to see these two wrestle each other again next week. Or over the course of the next few months. But I’m willing to give them a chance.

Maybe this is a case of Charlotte and Naomi just needing more time in the ring together to gel. I’m assuming Charlotte isn’t winning the belt next week. They did a backstage segment earlier in the night where Natalya, Carmella, and Tamina all complained to Shane that they deserve title shots, and they all lined up to give Charlotte the stink eye backstage before and after the match. So I’m guessing they will be interfering and costing Charlotte the title next week.

Primo and Epico have sold their timeshare business and have apparently decided to focus on wrestling for the time being. Probably a better decision than going back to bull fighting. The Shining Stars are now just Primo and Epico Colon, and now that they’re not so concerned about Puerto Rico’s tourism industry, they were able to pick up a victory over American Alpha.

The ending didn’t come off as well as it should have, but the rest of the match was good. I like that once again this week, American Alpha’s loss came when a veteran team outsmarted them by double-teaming one of them behind the ref’s back. It just makes sense to me that that’s how you can beat them. I’m not going to fool myself into thinking this is the start of something for the Colons. They now how the same amount of wins this year as The Ascension. But they’re great opponents for American Alpha, and their matches should only get better from here.

Best: The Champion This Country Deserves

This has a ton of potential. It would have been a perfect segment if his opponent, Gary Gandy, didn’t pop up a little too soon for the Pop-up Powerbomb. This could get a lot of fun in the upcoming weeks. Owens’ night wasn’t over after answering the challenge. Smackdown Live’s original fourth man in the broadcast booth sat in to commentate on the main event.

Once again this week, Shane McMahon forgot to book a main event. luckily, Baron Corbin wandered into a backstage interview Renee Young was conducting with AJ Styles, and the two men agreed to fight. So the main event for this week’s Smackdown Live was AJ Styles vs. Baron Corbin in a Beat The Clock Challenge. Wait. Sorry. That’s just a clock counting down to the premiere of Team Ninja Warrior.

I wasn’t overly into this match when it was announced. After their triple threat match last week with Sami Zayn, this one-on-one encounter felt like it could end up being a little uninspired. But boy did they prove me wrong. AJ and Corbin put on a good smart match that may have even improved on some aspects of last week’s.

Until next time, I’m Justin Donaldson and I can’t help but think, if only Jinder Mahal can pull this off and win the title, then Drew McIntyre can win the NXT Championship, and if Heath Slater can get his hands on the Universal Title, WINNER-TAKE-ALL 3MB TRIPLE THREAT!!!!