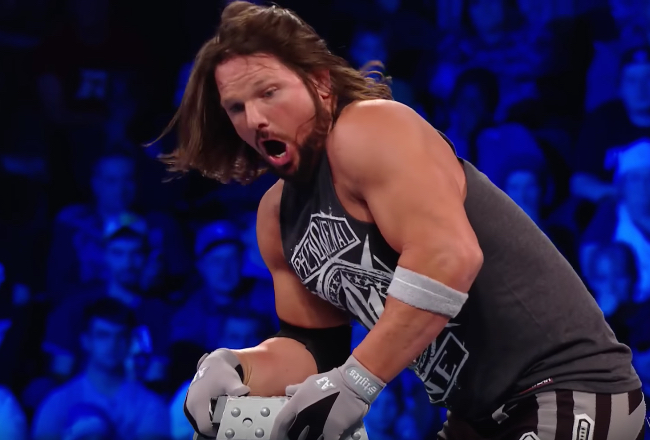 Congratulations! We did it! Smackdown beat Raw in the men’s traditional five-on-five elimination tag match at Survivor Series. That means the next time I see Brandon, I get to kick him in the balls. Now that the Survivor Series is behind us, we are on the very short road to TLC. Meaning everything is the same as before Survivor Series, but there’s also ladders now! Eventually there’ll probably be tables and chairs as well.

Conspicuous by his absence is The Undertaker. His return last week seemed like it could be a permanent one, but one week later and he’s gone without a trace. He doesn’t even materialize to thank the Survivor Series team members he threatened last week. I miss him already.

And now without further ado, here is The Best and Worst of Smackdown Live for November 22nd, 2016.

At some point in the last two months, Smackdown has turned into a wacky ’80s buddy cop film. Dean Ambrose is your typical loose cannon bad cop who doesn’t play by the rules; he’s always cracking wise and getting into hijinks. His partner, James Ellsworth, is the scrappy rookie; he’s not cut out to be a cop, but he’s out to prove to everyone that he belongs in the force. Shane McMahon’s the Chief. And then you have AJ Styles, the best cop on the force. He’s straight-laced and plays by the rules, he doesn’t care for the unorthodox tactics of Dean Ambrose, and he doesn’t think Ellsworth is in his league.

Now that I think about it, it’s more like Police Academy. At least that’s the level of comedy we get from Ambrose throughout the night. This week’s Smackdown Live begins with Shane McMahon proving he’s alive by coming down to the ring and talking Survivor Series. He’s joined by Dean Ambrose for reasons that aren’t entirely clear, followed by James Ellsworth who Shane is about to offer a Smackdown Live contract to when AJ Styles shows up to talk him out of it.

Shane-O-Mac ends up throwing Ambrose out of the building and putting together yet another Styles/Ellsworth main event. This time it’s a ladder match with Ellsworth’s WWE contract on the line. You could probably figure out how that match would go before I even finished saying what the stipulation is.

Ambrose is back before the segment’s over, and continues to show up throughout the show in various wacky situations and costumes. Like, giving people pizza or dressing up as The Mountie. If he doesn’t end up showing up in the main event to cost Styles the match, I’ll eat Dean’s big foam cowboy hat.

Best: The Loser And The Cheater

The Miz and Kalisto put on a really fun opening match this week. They’re good opponents for each other. Just about anybody is a good opponent for The Miz, but there’s not a lot of guys on Smackdown that can work well with Kalisto. It also feels fresh because we haven’t seen the matchup a million times. I believe Kalisto and The Miz have only wrestled each other two times this year, though there’s really no way to be sure as I’m too lazy to Google it.

I also appreciate that they tried something different with the distraction finish in the way that they shot it and how it played out. Kalisto is on the top rope and takes a second to look around to make sure Corbin’s not around. The camera then whip pans over to look for Corbin, who then appears from the opposite direction. If you’re gonna do the same finish over and over again, it’s nice that they’re at least attempting different ways to shoot it.

After the match, Corbin hits Kalisto with End of Days, and Miz eats a surprise superkick on his way back to the locker room from Dolph Ziggler. I’m assuming next week we’ll get a tag match with Ziggler and Kalisto facing Corbin and The Miz. I’ll take it.

The middle of Smackdown is a Tag Team Turmoil match. You start with two teams and as one is eliminated, another team comes out to challenge the winner. It’s a sample platter of Smackdown Tag Team matches. You get a little Hype Bros/Ascension, a little Usos/American Alpha … there’s something for everybody. It’s not as good of a match as I would have liked for it to be, as the pacing seemed to be a little off. But it kept me entertained and I like all these guys, so I’m still giving it a best.

It comes down to the mozzarella sticks vs. the loaded potato skins. American Alpha wins it and for about ten seconds were the number one contenders for the Tag Team Title when The Wyatt Family appears on the TitanTron to let Jordan and Gable know that to truly be the number one contenders, they’ll have to go through the Wyatts next week. I’ve seen a lot of people complaining about this invalidating the Tag Team Turmoil match,  saying that now that American Alpha has to beat Bray Wyatt and Randy Orton next week, this week’s match didn’t matter. But I just don’t care.

Jordan and Gable vs. Orton and Wyatt could be a great match. At the very least, it’s something we haven’t seen before. If this week’s match had to be pointless to make that one … at least it was enjoyable.

The best match on this week’s show was Becky Lynch vs. Natalya, but something very odd happened during this match. Or rather, didn’t happen. Alexa Bliss was sitting in on commentary, yet she didn’t get involved in the match. The match was able to have a clean finish when Becky reverses a Sharpshooter attempt into a Dis-Arm-Her.

It’s weird. Bliss didn’t jump in the ring to attack Becky during the match. She didn’t get up from behind the commentary table, jump up on the ring apron, and cause a distraction roll-up. There wasn’t a moment where Becky and Nattie end up fighting on the outside in front of the announce table, where Bliss throws water at Becky, or Nattie throws Becky into Bliss. Did someone miss a cue? Was that page of the script accidentally left out? Instead, a good match had an actual ending followed by Bliss attacking Becky after the match. With the Tag Team Turmoil match, this marks two clean finishes in a row. Looks like WWE has a new streak on their hands.

Worst: The Streak Is Over

My Baron Corbin/Kane dream match is ruined by a Kalisto interference. Less than a minute into the match, Kalisto just runs down, jumps into the ring, and attacks Corbin. It’s a real shame, as I’ve been looking forward to this matchup. These one-minute matches that end in almost immediate interference are very strange to me. I don’t understand why they do them. Who did they help? Do we really need to see Baron Corbin and Kalisto again tonight? They couldn’t have put some sort of squash match here to put someone on TV and help get someone else over? Apollo Crews vs. Local Talent perhaps?

Once the match is officially over, Kalisto grabs a chair and goes after Corbin with it. It’s maybe the laziest way I’ve seen to set up a chairs match. And that’s really saying something, since most chairs matches are set up pretty lazily. I like both Baron Corbin and Kalisto a lot, but this is not the feud for either of these guys. I don’t see how adding pieces of furniture is going to help it at all.

The main event this week once again is James Ellsworth vs. AJ Styles. This time with a ladder! And I am officially over this whole thing. Each week this bit is starting to feel more tired, and there’s no end in sight. Ellsworth winning not only means that he gets a WWE contract, he also gets a title shot at Styles. So this thing’s dragging on at least through the end of the year.

Ellsworth can be great when used sparingly and properly. The perfect example of this is The Survivor Series. But how many Ellsworth/Styles matches are we going to have to see? And I use the term “match” very loosely. It’s like if Gilberg had wrestled Kurt Angle in four matches in two months on Sunday Night Heat.

But AJ Styles continues to do a great job through all of it. It’s pretty remarkable. Now that James Ellsworth is officially signed and is now a Smackdown Live Superstar, I’m extremely curious to see what they end up doing with him once his storyline with Styles and Ambrose finally wraps up. Who’s he going to wrestle? I’m sure he’ll have a fun spot in the Royal Rumble. I could see him going over Curt Hawkins in a match at some point. Maybe a surprise victory against Jack Swagger. Or maybe his storyline with Ambrose and Styles will just never end. It’s starting to feel like that already.

Until next week, I’m Justin Donaldson and I could totally see Vince putting the belt on Ellsworth.