– Click here to watch this week’s episode on WWE Network. You can read about previous episodes on the Best and Worst of Raw tag page.

– Click this share button! It’s hard to promote content based on 20+ year old wrestling shows, so a click of that button will keep me in the business of making jokes about Tatanka’s comebacks. If you don’t, I’ll just hop around in a circle until somebody gives me another job.

Please click through for the Best and Worst of WWF Monday Night Raw for March 22, 1993.

This week’s episode begins with two brain damaged, sheep-f*cking cousins wandering around in the crowd, grabbing strangers by the throat and licking them in the face. They are beloved babyfaces.

I think I write about it every time they show up, but The Bushwhackers are such a blind spot for me. I legitimately have no idea why anyone liked them, and everyone liked them. Wrestlers in the 80s had it easy, man. All you had to do to get over was scream and flail around. We laugh at shit like the Gobbledy Gooker and the Red Rooster, but objectively they’re no worse than a coked-out barber or an eternally wet guy who wanted to beat you so he could put his snake on you. Seriously though, if I’d been in the balcony at the Manhattan Center and Cousin Luke appeared out of nowhere and put his tongue in my eye I’d throw that motherf*cker over the rail.

Seriously though, imagine if the Bushwhackers were a new tag team on Raw in 2015. Two old toothless men in camouflage cargo pants working a licking and shouting gimmick and doing that thing with their arms. They wouldn’t just get buried, they’d get Jimmy Hoffa buried. Imagine the Ascension doing everything the Bushwhackers did. Imagine their finish was Konnor holding Viktor in a headlock and gently walking into people.

They lose pretty handily, but much love to the team of Repo Man and Damian Demento for existing. I want to spend the rest of the afternoon writing fan fiction to explain why they’re teaming. I know the actual reason is “they’re bad guys,” but I want a backstory where Demento’s got really good credit and he’s the only guy Repo Man can’t find fault with. Like, he rented to own his venus flytrap body armor and never missed a payment. Maybe Demento likes Repo because he’s got too many mental problems to remember names and Repo’s clearly labeled.

The guy in the Quagmire bikini briefs is “Reno Riggins.” He sounds like a hard-boiled detective from the 1940s but nope, just a bemulleted Tarzan guy. He wrestles Tatanka, and if you’ve ever seen a Tatanka match before you know what happens. He gets beaten up for five minutes despite being twice the size and musculature of his opponent, then suddenly realizes he’s an Indian and does the WAR DANCE OF INVULNERABILITY.

The highlight of the show (and possibly WWF history, and possibly life itself) is Rob Bartlett almost getting beheaded by Vince for throwing shade at one of his sexy panty jobbers. Bartlett does what any of us would’ve done — note how stupid Reno Riggins looks, because Jesus Christ — and Vince gets HOT, sarcastically throws Bartlett under the bus.

“Looks like Reno’s got some visible tan lines going there, Vince!”
“YEAH I’M SURE THAT MATTERS IN THE MATCH.”

It’s the closest Vince has ever come to being me on commentary. MAYBE JUST WATCH THE MATCH AND STOP TRYING TO BE COLIN QUINN, ROB. This comes a week after Gorilla Monsoon almost lethally injected Bartlett on live television, so I like to imagine Gorilla’s in the back with a headset on murmuring “if this f*cker says ONE THING I don’t like and he’s DEAD.” Everyone survived, thankfully. Tatanka went on to face Shawn Michaels at WrestleMania IX, and Reno Riggins went on to film at least 200 customs matches where he’s giving someone a concerningly deep camel clutch.

The camera cuts to these guys in the crowd and Bartlett’s all, “Hey Vince, you recognize those guys? It’s Jason, Billy and Kevin from ONE LIFE TO LIVE!”

1. Rob Bartlett being a One Life To Live superfan and instantly identifying characters on sight is funny. Bartlett being such a fan that he ONLY identifies them as their character names is funnier.

2. None of these guys were Nick Mancuso from ‘Matrix’ so Vince had no idea who they were.

3. You may recognize the guy on the left as Actual Celebrity Ryan Phillippe. He spent most of the 90s making sexy teen boners like I Know What You Did Last Summer and Cruel Intentions before digivolving into a grownup and making Crash and Gosford Park in the 2000s. He’s the rich man’s Freddie Prinze Jr. and the poor man’s Heath Ledger. You may recognize the other guys from their work on Broadway, where they have to walk up and down the street all day sweeping up trash.

Best: The Two Very Least Important Wrestlers Who Have Ever Appeared On Raw

Okay, so the next match is Money Inc. vs. Local Talent, and I use the term loosely. Calling these guys local talent is an insult to the random pairs of 80-pound rhyming poindexters WWE found to stack on Ryback’s shoulders. This is how bad they are: Fink announces them as “Jeff Armstrong and Scott Rich” and there’s a pause, and then Vince yells “JOHN AND JEFF!” He’s not correcting Fink, his brain won’t allow him to recognize them as people. He lost his attention in the one second between their announcement and having to talk.

I’m giving it a Best because Ted Dibiase realizes about 20 seconds into the match that he’s in the ring with backyarders and beats them up something fierce. One of them doesn’t even know how to bump. Every time he falls down he hops backwards, lands on his butt and rolls onto his back. He tries to do a hiptoss and almost falls over.

Here’s another example of how bad they are: during the match, the camera cuts to Rob Bartlett WATCHING OTHER SHOWS ON HIS MONITOR.

Vince is like HEY THERE’S A MATCH GOING ON and Bartlett does impressions of Mary Tyler Moore characters. It literally cannot get worse than this.

Worst: Macho Man Is A Little Too Excited About Virgins

During the WrestleMania IX Podcast A-Go-Go, Mean Gene mentions that “vestal virgins” are one of the reasons we should watch. Togas, luxury sedans, vestal virgins. He starts communicating via satellite with Macho Man about the virgins, and Macho is STOKED about them. Two things:

1. There are tons of virgins at every wrestling show, they’re not a thing you can advertise.

2. This may explain those Stephanie McMahon rumors. 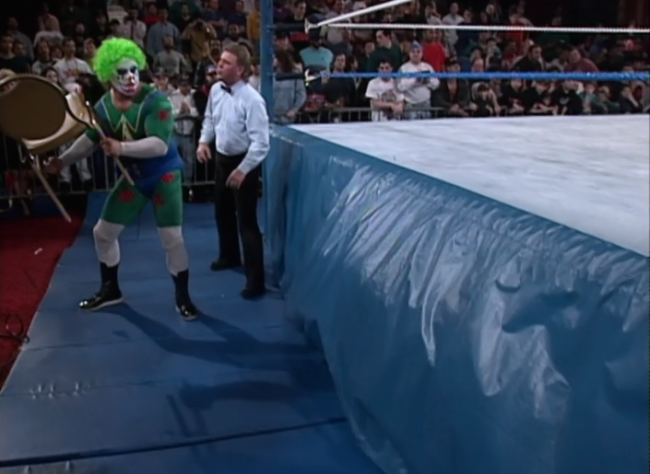 Doink vs. Kamala is the final match on the show, and I have to say, 1993 Doink the Clown might be my favorite wrestler. He’s the only guy on the show who seems to come into matches with a game plan. A guy like Tatanka just shows up and Tatankas everywhere and you know what you’re gonna get. Doink like, scouts his opponent and tries to figure out logical ways to beat them. It’s GREAT.

For Kamala, Doink brings out a wrapped gift and acts like he’s gonna give it to him, but doesn’t. That enrages Kamala and gets him off his game (assuming Kamala has a game beyond “savage floundering”), allowing Doink to just sneak around and shoot a bunch of takedowns. When Kamala regains the advantage, Doink bails and initiates a chase around the ring culminating in GIFT GIVING ATTEMPT NUMBER TWO. This time he allows Kamala to take and open it, quietly rolling back in the ring and letting the big idiot get counted out. It’s wonderful. The best part? There’s NOTHING IN THE BOX.

After the match they get Kamala’s heat back in one of the weirdest ways I’ve ever seen. Doink escapes under the ring, so Kamala gives chase. Doink comes out on the other side, grabs a ringside chair and swats it at any movement behind the ring apron. It seems like a good plan until you realize Kamala could crawl in any other direction and escape unharmed, which he does, creating an impossible Raw moment where a mindless African savage successfully Solid Snakes a clown.

Worst: This Week’s Main Event Is A Rob Bartlett Gross-Out Joke That Ends With Him Elbowing A Woman In The Face

So yeah, despite giving him a job and putting him on TV every week, WWF’s moved into “openly trying to threaten and humiliate Rob Bartlett” territory. The main event of this show is a diarrhea joke. That sounds like I’m being colorful, but no, it’s an actual diarrhea joke.

Vince brings over the “Rob Bartlett Fan Club,” which is three of the heavyset ladies in bathing suits Raw uses as “hilarious” ring girls. Bartlett introduces them as the “fabulous Riya sisters: Seva, Paya and Daya.” Get it. Vince and Macho respond with “that’s not very nice,” refusing to “Yes And” Bartlett’s bit, and say that Bartlett should kiss them. Surprisingly he just says f*ck it and goes for it, which earns him points. Points he loses in full seconds later when he does a big, exaggerated “yuck” thing where he wipes his mouth and throws his arm back, brutally elbowing the middle sister in the face. Not a joke. He just bashes her in the head and has to apologize. And that’s Raw’s main event. A diarrhea joke that ends with an announcer almost shoot knocking out a woman.