– Click here to watch this week’s episode on WWE Network. You can read about previous episodes on the Best and Worst of RAW tag page.

– Click this share button! It’s hard to promote content based on 20+ year old wrestling shows, so a click of that button will keep me in the business of making jokes about Sherri Martel’s blaxploitation wardrobe.

Please click through for the Best and Worst of WWF Monday Night RAW for April 12, 1993.

This week’s cold open — yes, there’s a cold open — features Money Inc. paying off the Beverly Brothers for secrets on how to beat the Steiners. The Bevs lost to the Steiners the week before, so I guess that makes them an authority on how to win?

DiBiase hands over stacks of cash in exchange for clandestine secrets like “they’re really fast” and “they’re really strong,” and “don’t get suplexed by them or Frakensteinered.” Like, I don’t want to to throw shade at the Beverly Brothers or their deductive reasoning, come on, really? They could’ve paid off Rob Bartlett for that information. A guy who’s never watched wrestling and is barely paying attention could see the Steiners throw a dude and say, “don’t let them throw you.” I was hoping Beau would scream HIT ‘EM IN THE PARTS THAT LOOK LIKE TRAPPER KEEPERS.

So, the first match of the week is Scotty Steiner vs. IRS. The only notable tip we heard the Beverlys give Money Inc. was “take out their legs immediately,” so what does IRS do? He runs headfirst into all of Steiner’s offense like he’s Cat Zingano and when he’s on offense, it’s nothing but chinlocks. Chinlocks for days. You’d think he was Randy Orton’s dad, not Bray Wyatt’s.

After roughly ten minutes of this (because “boring wrestling” used to be Raw’s “constant commercial breaks”), Steiner suplexes IRS and Dibiase runs in to cause a DQ. Good to see some things haven’t changed, I guess. Now having officially used none of the Beverly Brothers’ advice, DiBiase gets beaten up by the combined Steiners. That brings out the Beverlys themselves, and that turns into the Beverlys and Money Inc. having a shoving match. DiBiase’s mad that the Pro Tips didn’t work, and the Beverlys are upset IRS has shit for brains. Their advice should’ve been “pretend Scott Steiner cheated on his taxes.” Bet the motherf*cker would’ve listened then.

Worst: Rob Bartlett’s On The Wrong Side Of His Announcing Career

Bartlett has two notable announcing moments on this episode:

1. Suggesting that Scott Steiner should snap IRS’s suspenders, and Vince instantly burying him for being an idiot.

2. Joking about how Tatanka won’t be able to scalp Von Krus because he’s already bald.

The weird thing about Bartlett is that if Bobby Heenan or Jesse Ventura had said those things, we would’ve laughed. We’d get the idea that they’re old-timey wrestling heels who’ve been around and seen everything, and have a deep understanding of how pro wrestling works. They know what to say to get under our skin, and they’re doing it for the right reasons. Gorilla Monsoon would’ve dropped a WILL YOU STOP to either of them for either of those jokes. Here, though, it’s very clearly a comedian who has never watched wrestling before trying to contribute bad observational 90s humor while the rest of the team suffers him, because nobody’s got the guts to cut their losses and fire him.

That’s him kicking out just after the three to protect himself in a loss to Tatanka.

Von Krus, the character who looks like an adult baby and has a lifetime WWF TV record of 0-14. That guy had to kick out at three so he didn’t look like a wimp against the undefeated guy getting a major push who’d just defeated Shawn Michaels at WrestleMania. Pro wrestling, everybody.

Best: So, Uh, I Think The Attitude Era Just Began

So yeah, speaking of that WrestleMania match between Tatanka and Shawn Michaels, Michaels had debuted Luna Vachon as his new valet. If you’ve never seen her before, she looked like a fairly normal scene kid from 2015, which was f*cking terrifying in 1993. She was also a member of the legendary Vachon family of wrestling maniacs, which made her a legit threat to anyone and one of the best female hands a North American wrestling show could have in the early 90s. She was a victim of the time, sadly. She never really had anyone to work or anything to do, so she’d get paired up with whomever and do whatever. Here, she’s with Shawn. To counter that, Tatanka brings out Shawn’s old girl, Sensational Sherri. If you aren’t familiar with Sherri, learn your f*cking wrestling history.

Rob Bartlett (of all people) conducts a ringside interview with Luna, who calls out Sherri for a fight. Sherri answers like he’s Pam Grier, rocking an afro and a pantsuit. Sherri tells her to keep her shit straight. Luna says she’s “a bandit from the wild untamed future, a place that was before and will be again” — because Luna ruled — and they start catfighting.

When I say “catfighting,” I mean SERIOUS BUSINESS CATFIGHTING. Like, apartment wrestling if your apartment was the ECW Arena. They start angrily punching and kicking each other in the stomach and ripping off each others’ clothes and throwing themselves into the crowd. It’s CRAZY. It’s got a palpable energy to it that almost everything from the first two years of Raw lacks, and it’s magical in a “nervous to look directly at this page in the wrestling magazine” sort of way. It makes me feel twelve and kinda nervous.

The notable thing is that these are women. I put that in italics, so hopefully you get what I’m saying. If you’d put Sasha Banks and Alexa Bliss in this catfight it wouldn’t have been the same, because they’re young and athletic and stage performers. Sherri and Luna are old school wrestlers, but they’re also grown-ass women, and it shows. It’s like your mom’s hot friend went crazy at a bar and started beating somebody up. They go to break and you think it’s done, but when they come back it starts all over again. Bartlett does some bad comedy getting shoved around and having his clothes ripped and Macho’s got some iffy reasons to be high-fiving Sherri, but none of it diminishes the impact.

Best: Savage’s Call Of This

hahaha he’s not even trying to sugar coat it anymore 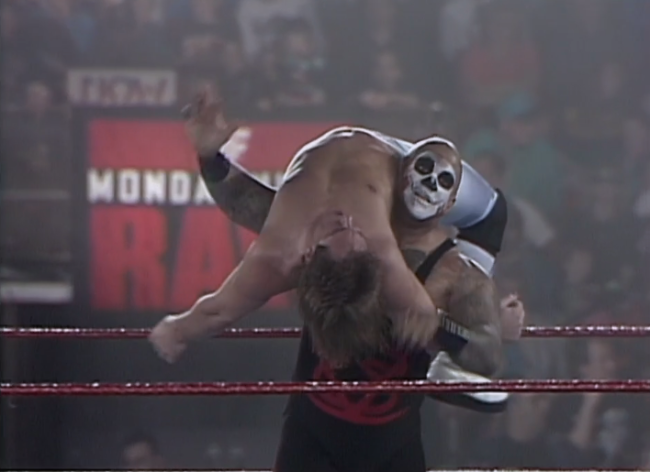 During Papa Shango’s match, they’ve got these fog machines going that basically create clouds over the ring while he wrestles. It’s pointless and probably a pain in the ass, and everybody sitting higher than the floor’s gotta breathe in fog machine vapor, but it’s a nice visual. They probably didn’t do it on purpose, but in a world where somebody said “Sin Cara can’t see out of his mask very well, right? Let’s make him wrestle in dark blue and orange lights,” anything is possible.

Papa squashes Scott Taylor, aka the future Scotty 2 Hotty, and the match is just an excuse to have something going on in the background while Rob Bartlett figures out if he’s supposed to be selling pain or ejaculation.

Behold Friar Ferguson, probably the most confusing and least thought-out WWF character of all time.

He’s Mike Shaw, aka Bastion Booger, aka Norman the Lunatic and Makhan Singh and a dozen other names. They had Bastion Booger and thought, “you know what’d make him better? If he danced in the ring and we still laughed about how fat and gross he was, but he was a member of a mendicant Christian religious order.” That’s Friar Ferguson. A monk who does the Charleston and wipes his robe on peoples’ faces because it’s been brushing against his balls. If I could sit down with Vince McMahon, I think one of my first questions would be, “how the f*ck did you expect to draw and make money with Friar Ferguson?” What’s the end game? Somebody beats him up and disproves religion? God returns to Earth and buys him a pair of pants and a bar of soap?

Before I forget, the other notable thing about the match is that his opponent is “Chris Duffy,” which I’m 80% sure is the name of somebody you went to high school with. He’d gain anonymous fame a few years later as the Santa Claus who got beaten up by Stone Cold Steve Austin on Raw. He’s also famous for being one of the gnarliest looking jobbers in wrestling history. He had a seizure before a match in 2000 and died at age 36.

That really got dark, didn’t it.

The end of the show is a PLEASE BUY THE REPLAY OF WRESTLEMANIA IX, WE F*CKED UP hype video and an interview with Money Inc. that ends with the Beverly Brothers attacking them from behind. That sets up The Bevs vs. Money Inc. for next week, and confirms that Hospitality Dressing Rooms are where assholes stay.

THIS AND MORE MILD ACTION NEXT WEEK!